Here's something interesting for those of you who've gone head-first into the smart home craze. According to ZatsNotFunny, a blog dedicated to connected home tech, Logitech is recruiting beta testers for a new tool integrating Harmony remotes with the voice control features of Amazon Alexa/Echo. Basically, users who have both should be able to speak commands into their Echo and have the remote perform them without ever picking it up. Neat. 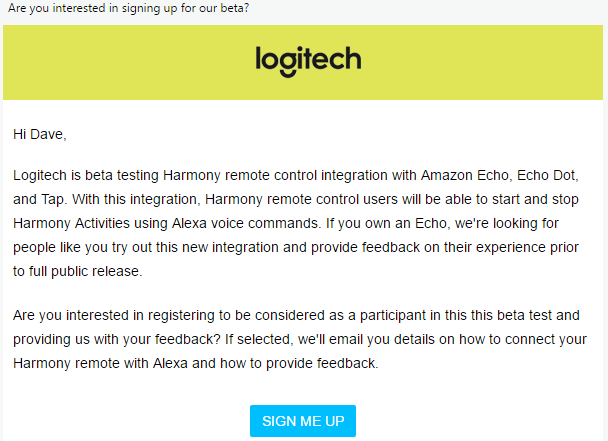 Unfortunately it looks like the beta is closed at the moment, as the only evidence of its existence is the screenshot above, recruiting beta participants to sign up (presumably) via email. The text does say that Harmony remote connections should eventually be available for the original Echo, the Echo Dot, and the Tap, but there's no indication of when it will be available to the general public. Right now Logitech is only looking for owners of the larger Echo.

But don't worry, couch potatoes: it probably won't be that long. Logitech knows that Harmony owners are some of its most dedicated customers, and the existing APIs to create a bridge between Harmony and the Alexa voice control system aren't overly complicated. Considering how quickly Amazon is adding capabilities to Alexa, I wouldn't be surprised to see Harmony integration come in a matter of weeks. We'll see.

NBC's Olympics app includes scores, schedules, news, and video of everything except the actual ...