Since I took over audio reviews at AP from Cam, I have been asked to share my opinion on speakers from dozens of brands. One brand that pops up often in these discussions is RIVA. I hadn't heard of the company before so I did some research and discovered that the newcomers to the portable audio industry are building speakers that are turning heads (or maybe just ears) with their smooth sound and sophisticated styling.

I asked RIVA to send me one of their speakers to check out, and they obliged, so today we'll take a look at the newest speaker in their lineup, the RIVA S ($250). Shall we begin?

What's In The Box 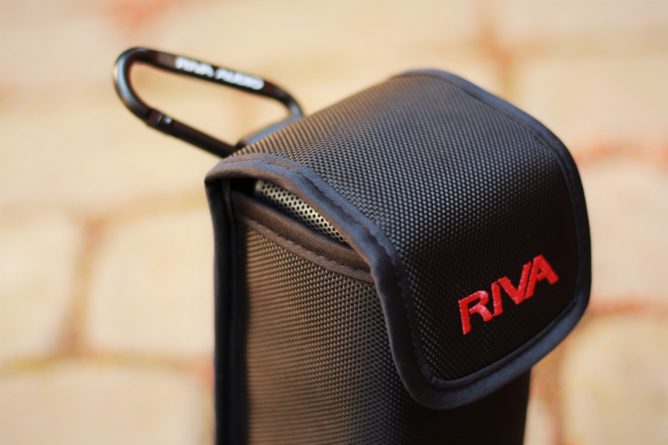 This is a good lookin' little speaker. A sturdy metal grill completely surrounds the device protecting the drivers. The top of the speaker is made from a gently curved piece of glossy black plastic. It's a bit of a fingerprint and dust magnet, but it looks sharp.

Finger-tip sized, touch-sensitive controls are arranged in a line across the top of the speaker. They are back-lit by brilliant blue LEDs, which can be quite bright in a dark room. They automatically turn off after a few seconds (except for the Bluetooth connection indicator light). A wave of the hand over the top of the device turns the lights back on for two seconds, thanks to a motion sensor that's situated at the top middle of the speaker. 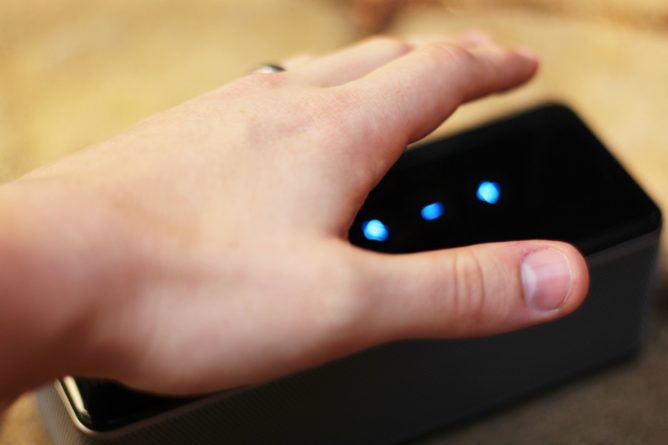 Buttons on the top from left to right are power, surround mode, Bluetooth, mute, volume down, and volume up. Long pressing certain buttons also engages other functions, like pausing or skipping tracks. I'd have preferred dedicated buttons to control playback so I didn't have to memorize a function list, but it's better than not being able to control playback at all from the speaker. 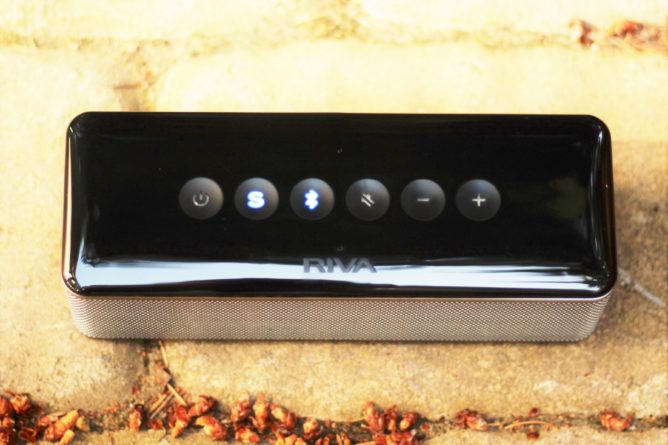 Around back, the speaker's connection ports are found in the center-rear back panel. From left to right the inputs are AUX, MicroUSB, (for software upgrades only, not charging), USB out (for charging other devices), 19V DC charging port, battery on/off switch, and an LED battery life indicator. The built-in battery is 2,900 mAh, large enough to power the device at medium volume for up to 13 hours (7-8 at full volume). 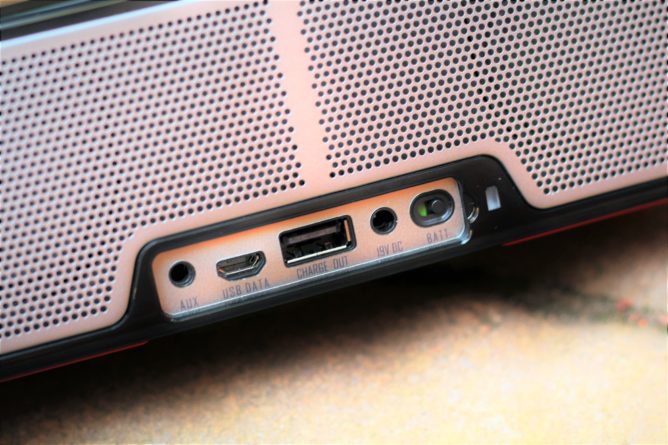 I have to say that it's a little weird that the device essentially has two power buttons. You have to set the battery on/off switch at the back into the on position then hit the back-lit power button on the top to turn on the speaker. The reason for this is to allow the user to charge devices using the USB out port without turning on the speaker. It takes a bit of getting used to, but is just a minor quibble rather than a major annoyance.

My real annoyance is that the speaker uses a proprietary charger instead of MicroUSB, or USB Type-C. There is no excuse for this in my opinion. With only a 2,900 mAh battery on board, any old phone charger would have sufficed to recharge the speaker at a reasonable rate. Hopefully RIVA changes this with future devices.

OK, I'm done ranting, lets move on. The RIVA S rests on two L-shaped red silicone pads at the bottom of the device. These keep the speaker from sliding on a smooth surface, like the hood of a car, while also reducing vibration. A removable protective flap is housed under the speaker which, when taken out, can be used to cover the ports. 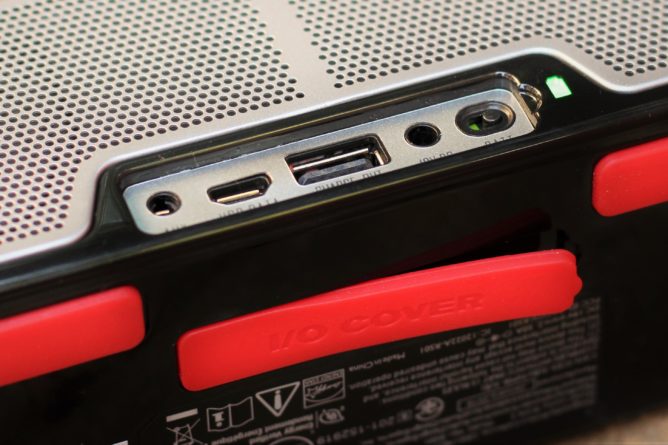 With the flap in place the speaker has IP4X water-resistant rating, meaning a few splashes won't harm it. The design works, but it worries me a little that the flap isn't attached to the speakers body. It seems like it would be an easy thing to lose, rendering the device susceptible to water damage.

While I have a few minor complaints about the design on the RIVA S, I have absolutely nothing negative to say about the way it sounds. Man, this little speaker can sing. Crisp highs, velvety mids and just the right level of bass make this one of the best sounding small speakers I've ever listened to.

One of the most remarkable things to me about the S is how little distortion is present in audio coming from the speaker. Not even the slightest hint of hissing, popping, or humming. Bass is very tight and controlled without causing any distracting vibrations or overpowering the mids. The result of this is a very natural, detailed, and rich sound profile that I can listen to all day without fatigue. My hat is off to the engineers who tuned this thing, it really does sound quite good. 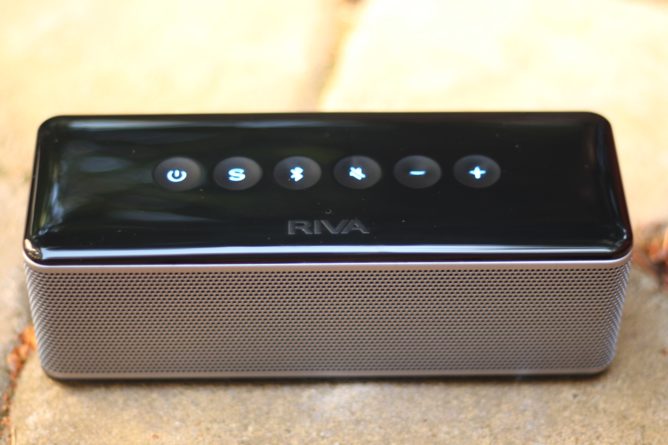 Volume on the RIVA S is slightly less than I expected from a speaker of this size. It fills a midsize room without strain, and with outward firing radiators at either end it does a great job of using walls to amplify its sound. However, when I took the speaker outdoors I wished it had a bit more power. That being said, the speaker sounds clean and clear even when maxed out, which is not always the case with speakers of this size.

The RIVA S has its own Android app, with which users can control some speaker settings remotely, such as adjusting the volume, monitoring battery level, and pausing/skipping tracks. There are no equalizer settings, which would be more of a disappointment if I wasn't so content with the factory tuning. 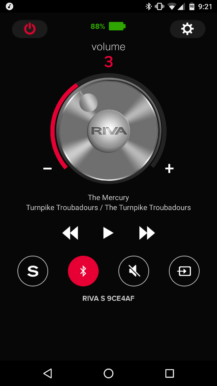 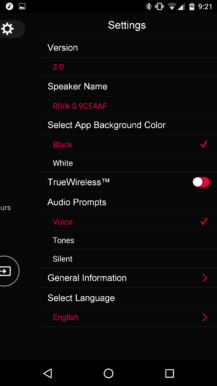 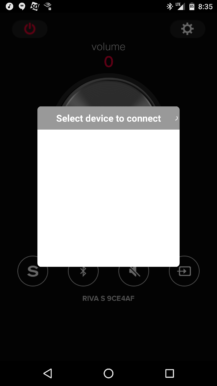 In the settings portion of the app, users can change voice prompts, turn on TrueWireless™ (a feature allowing two RIVA S speakers to pair and create a stereo system), and make other adjustment, like changing the app's color profile and language. Those are all nice functions and work well, but only when the app is able to make a connection to the speaker.

That, unfortunately, was frequently a problem. At least half the times I tried to connect to the RIVA S I would get stuck in a loop of selecting the speaker, then waiting, and then being asked to select the speaker again. Killing the app and rebooting the speaker seemed to solve the problem, but hey, that's kind of annoying.

With a 1.8 star rating on Google Play, I don't think I am the only person who's had struggles with the application. Hopefully RIVA's audio engineers can teach their mobile engineers a few things about quality and get the issues sorted out soon.

Sure, the app has some issues and I have a couple of small nit-picks with the speaker's design, but none of those problems detract from what this speaker does really well: produce beautiful sounding audio. That's kinda the whole reason to buy a speaker in the first place, and there are very few other devices of this size I've listened to that sound as good as the RIVA S.

It's a bit on the spendy side at $250, but I think the build quality and sound justify the price. That being said, there are a lot of speakers in the price range, many from more established companies. I'd recommend listening to as many as you can in person before deciding which to buy.

Do you want one for yourself, or perhaps would like to learn more? Then follow the link below to RIVA's website. The RIVA S is available in black/silver (as reviewed), white/silver, and white/gold. While you are looking at the RIVA S, be sure to also check out the RIVA Turbo X, RIVA's older and larger wireless speaker, it's also quite good. Have additional questions? Let me know in the comment section below. 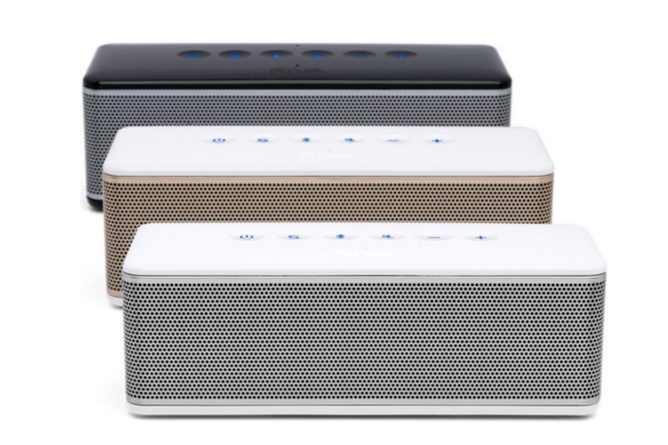 [Once more, with feeling] Official XDA-Developers app lands in the Play Store, again