Because the Chromebook Flip doesn’t do phone calls or SMS, doesn’t have GPS, and doesn’t have a rear camera. Thus, like any Android device without those things, apps requiring them will not show up as compatible in the Play Store. That doesn’t mean they wouldn’t work necessarily, it just means you can’t hit the “install” button in the store.

Now, for the rest of the apps that do install? I can’t go through every single app and tell you how it runs - sorry. I would drown in questions, so I ask for the sake of everyone else’s questions, unless you are truly, deeply, passionately needing to know… don’t ask. I’m not trying to be mean, I’m just trying to avoid a giant list of questions that are all the same except <app here>.

So, what works well? You boot up your Chromebook and suddenly a Play Store icon appears in the taskbar. You click on it, and boom: Play Store - signed in and everything. You accept the terms and you’re set to go. Voice search even works, and quite well. At that point, it is obviously time to install alltheapps.jpg. 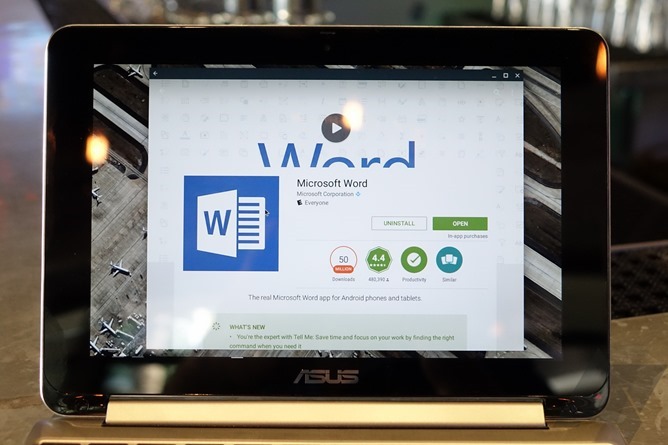 The standard "windowed" size for all Android apps on Chrome OS - apps that force portrait views like Snapchat can appear different, though.

Android apps run in windows on Chrome OS. The windows can be set to maximized view, but are otherwise not resizable (edit: I've been informed this will change, probably, with Android N - this version of Android apps for Chrome OS is based on Marshmallow), maybe because Android apps are really not designed - generally speaking - for incremental resizing on the fly in a way that doesn’t cause things to go slightly berserk. I’d have to consult an expert on that. But either way, there’s little app or big app mode, the former of which takes up about 70% of the total screen area on my Flip. So, no: at this point, you won’t be tightly side-by-siding Facebook with Twitter with a little Plex down in the corner, sorry. And video apps generally won’t keep playing videos in the background when you take focus off them (click anywhere but in the video app). This is not like a true Android desktop experience. 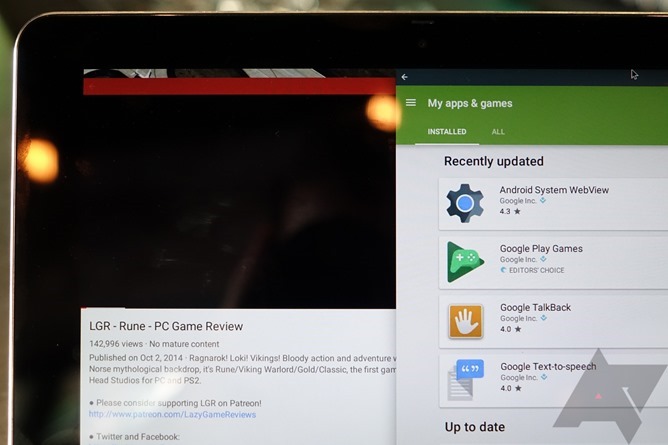 Once focus is off the YouTube app, videos go black (though audio still plays if background play is enabled).

A lot of this is, admittedly, because apps simply aren’t designed to work [well] in these kinds of situations. We’re just now getting to split screen in Android with N, so there hasn’t been any incentive, for example, to make a video player to keep playing video in the background when another app is in focus. These sorts of features have to be added in. And that’s not Chrome OS’s or Google’s fault, really - that’s just how things are going to work for the time being.

Some apps will naturally be much more suited for Chrome OS than others, particularly games. If you have a touchscreen Chromebook like the Flip (which, better yet, is a convertible), you may forget your Android phone or tablet even exists if you’re typically using it for gaming. Chromebooks have massive batteries and displays compared to most smartphones and even many tablets, and the CPU and GPU generally don’t need to be throttled much because of the much larger area afforded for heat dissipation. Now, how well games will run on x86 Chromebooks, I don’t know - the Flip is using an ARM Rockchip that, while not extremely fast, doesn’t even need a fan. Whether all games will work is far from a given at this point, though, because once again: dev channel. Bugs.

Because most Android apps are also designed specifically with touch interfaces in mind, you’ll find that some apps are simply, well, frustrating to use with a mouse and keyboard. I don’t want to sugarcoat it - using the official Twitter app on the Flip really kind of sucks. The target sizes for text fields are tiny, you have to scroll up to refresh your feed, and the app crashes every time I try to reply to a tweet. One of those things is just a bug, but the other two are just a result of the way the app has been designed. Namely: for smartphones. 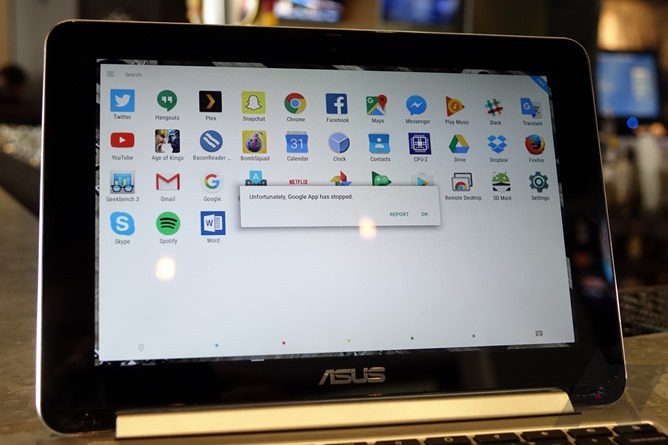 Then there are the sort of usability issues you probably wouldn’t think about until actually trying this thing out. Where do you put your Android apps? In a folder? Well, Chrome OS doesn’t really do desktop stuff. You could make a folder, but that would mean manually managing that folder and putting new apps in it every time you install them. That’s lame. So, what do you do? Why, download an Android app to do it for you, of course. App Swap, an app drawer replacement, was suggested to me for just this purpose, and it definitely does a better job than the built-in Chrome OS app launcher. But for an average user, this likely isn’t going to be something that’s intuitive, and trust me: it is a bit of a problem.

My Chrome OS launcher has three Google Play Music icons, and doubles of pretty much every other Google product now, and there’s no way to tell them apart aside from remember where in the list they appear. So I hope there’s some work going on with app management and distinguishing Chrome web shortcuts from Android apps down the road. Another odd annoyance has been the Chrome OS shelf (taskbar) - you definitely need it set to auto-hide by default, because Android apps launch slightly under the shelf, obscuring buttons in some cases. It’s little things like this that are more on the Chrome OS team than individual app developers. 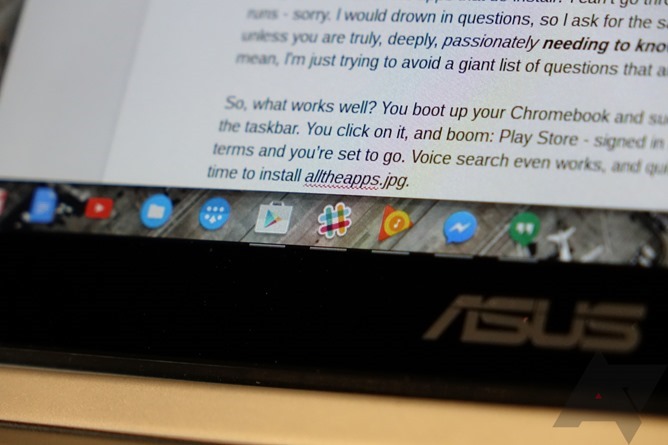 Another interesting thing I’ve noticed is notification handling - it’s probably not what you’d expect, or perhaps it's just broken in some apps, I'm really not sure. As far as I can tell, Chrome OS Android apps won’t serve you notifications at all unless you’ve actively minimized them in the background, as opposed to closing them. For example, if I receive a Hangouts message, there are two scenarios on Chrome OS as it works right now where the Hangouts Android app will send me a notification. The first is if it’s actively up on the screen in focus which, well, duh. The second is if I hit the minimize window button and it sits down on the shelf. If I hit the “X” to close the app window, I no longer get notifications. It won’t give me any notifications until I open it up again. I can see why this might have been intentional - or maybe it’s just not finished - as I’m not sure I’d want the level of notifications I get on my phone bugging me on my laptop. Granted, sometimes notifications didn’t seem to work at all, either, with Slack’s seeming to be broken for me. 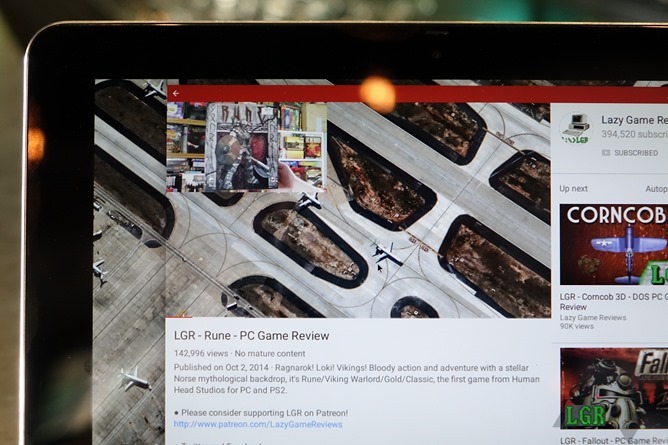 Picture in picture... in picture? An odd YouTube app bug.

Anyway, there are real upsides to Android apps on Chrome OS, too, obviously. Even on this relatively slow Chromebook Flip, Android apps themselves are pretty quick and responsive. The number of crashes I’ve encountered is admittedly high, but a lot of stuff - particularly Google’s - just works. Games are a huge deal for a lot of people with this update, as are things like media player and social apps. Heck, you can run Microsoft Word on a Chromebook now - and not in some web interface. But it’s still very much early days.

As such, for now, I consider Chrome OS’s Play Store mostly an experiment and a way to play games. For much else, I’m sure it can be useful, but it’s so early on that I’m having a tough time finding much to do beyond enjoy the novelty so far. There are no doubt many things people are already finding on the Play Store that they’ve been absolutely dying for on Chrome OS, though, and that’s seriously cool. And for something as ambitious as this new feature is, it actually feels about as fully-baked as it could be out of the box. A lot of the shortcomings of Android apps on Chrome OS right now are on the apps themselves, and I think the popularity of Chromebooks will encourage developers to respond to and optimize for this new user base. There is so much wonderful, exciting potential here 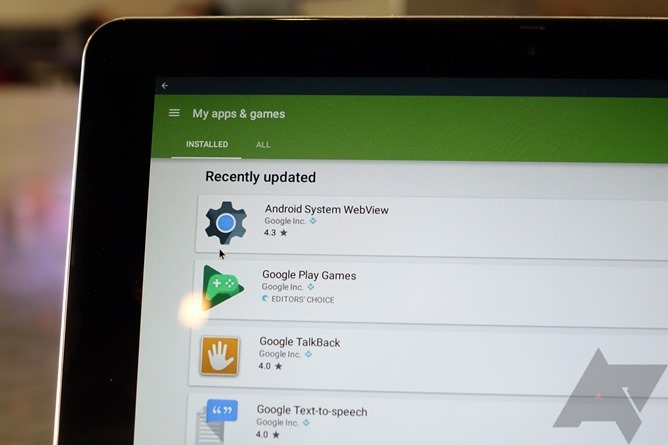 Waze is launching an 'avoid difficult intersections' toggle, but only in LA for now

Get more for your money and never lose your game progress with Amazon Coins and the Amazon ...