Facebook announced an all-new layout for its Messenger app today (presumably for Android and iOS, though only iOS screenshots were provided). The new "home" area in Messenger is designed to make the app more than just a dumb message hub, and much more of a "Facebook people I care about" hub. Instead of simply being a list of chats, Messenger will now show you your favorite contacts, upcoming birthdays (because Facebook), and who's online now. Recent chats will still sit at the top of the "home" area in the app, there just won't be as many living there anymore.

It's unclear when the new layout is scheduled to roll out to end users, and again, the lack of any Android assets whatsoever for the announcement would seem to suggest me that this might be an iOS-first feature. But it's also possible they could be released at the same time, you never know with Facebook. Overall, I like the changes here - a list of recent messages will always be useful, but unless you are an absolute Facebook chataholic, you could probably stand to give up a bit of that room for some more contextually relevant info. 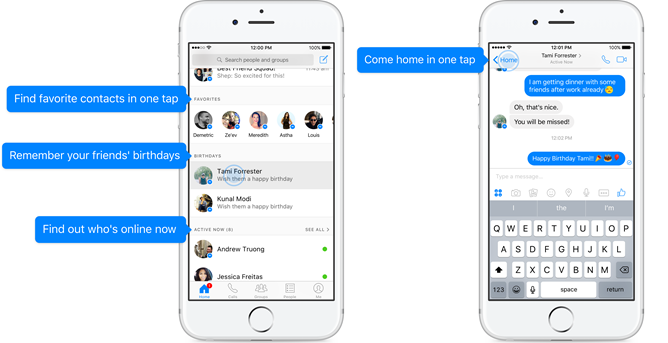 To find out more, check out Facebook's official blog post. Google Photos now lets you view images as a slideshow