Introduced just two short months ago in Android N Developer Preview 2, the calculator quick settings tile has been removed in the latest N beta release. N Developer Preview 4 has killed the nascent shortcut, though it's unclear if it will be coming back in time for N's final release. The tile itself was actually, well, kind of lame - instead of doing what you'd think it would do and opening some kind of mini or floating mode for the stock Android calculator, it just straight up opened the full calculator app. The tile did have the benefit of working when the phone was locked, but it's hard to say just how much more handy that really made it. 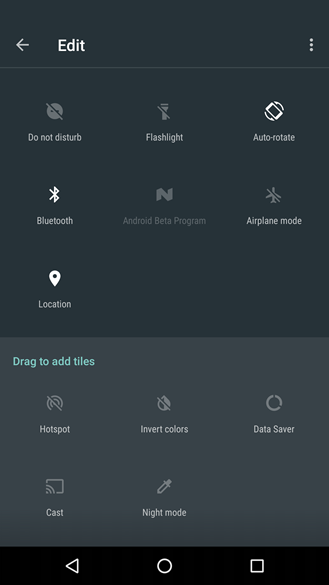 Personally, I'd have much rather seen a smaller in-line calculator that folded out of the quick settings UI, and then folded back in once you were finished. But as features go, something like that would probably fall beneath, say, a proper Android night mode in Google's priority list.

Googler Ian Lake suggests filing a bug report if you want to see the tile back. It's not clear why the Calculator app in DP4 would remove the feature in the first place, though.

A chat app with the same name as Google's Allo was mysteriously delisted from the Play Store ...