The OnePlus 3 has been in the news so frequently these past few weeks that we're more than ready for the phone to be officially announced so we can move on from all the rumors. And speaking of rumors, after getting our clearest look yet at the device yesterday, we thought we were done with the leaks, but it seems that there's more to learn about the 3, and from very official and reliable sources to boot.

People in India who happened to check the Hindustan Times newspaper today might have noticed an interesting ad taking up a huge space in one of the pages. It's a one day early advertisement for the OnePlus 3 that confirms the design of the device and shows that the version with 6GB of RAM and 64GB of storage will be an Amazon Exclusive and will retail for Rs. 27,999. That's the equivalent of $416 in USD. Unfortunately, the ad doesn't tell us whether other variants of the OnePlus 3 will also be Amazon Exclusives or not. 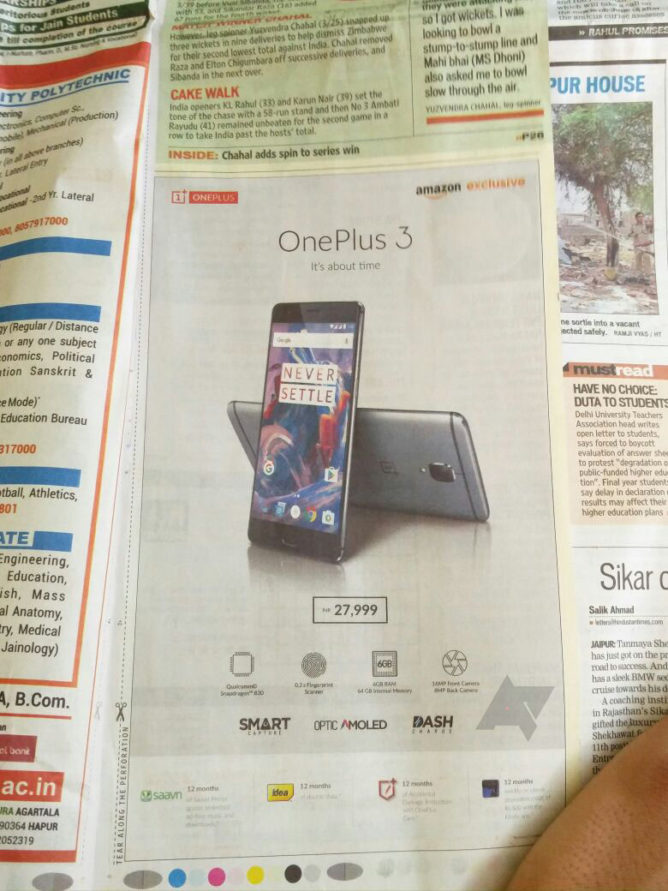 The rest of the specs of the phone have been known for a while, including the Snapdragon 820, fingerprint sensor, and the 16MP back camera and 8MP front one. Yeah, those are inverted in the ad.

If you're eager to check out the OnePlus 3, you should tune in to The Loop VR app today at 12:30PM Eastern Time and get your wallets ready because the phone will be available to buy invite-free.