That's where Dango swoops in to provide a better approach. The app was developed by the same team behind Minuum, the famous one-row keyboard that started as an Indiegogo campaign and has since developed way beyond that to support multiple languages, emojis, Android Wear watches, and more. But Dango is different. It's not a keyboard, it's an add-on to any keyboard or messaging app you might be using, and it uses neural networks to associate words with their corresponding emojis and GIFs for a faster, easier, and more seamless experience.

Before you even start using Dango, the moment you launch the app, you're asked to grant it two different kinds of permissions. The first is as an Accessibility service, so that it can read your screen and know when to pop up, and the second is to draw over other apps which is essentially how the Dango floating button works. 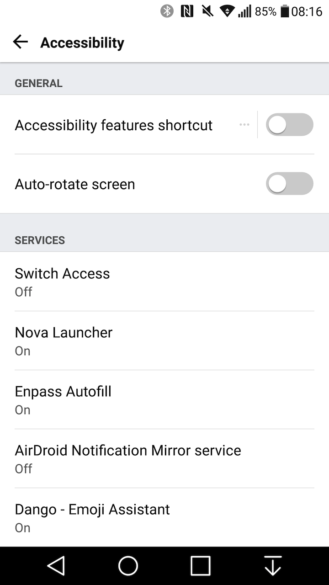 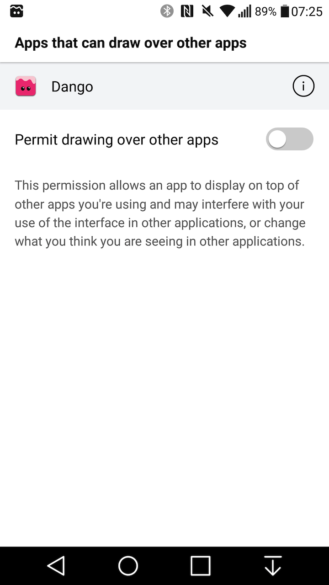 You're then thrown into a tutorial that explains how Dango works from quick emoji suggestions to the full panel that has emojis, GIFs, stickers, and more. 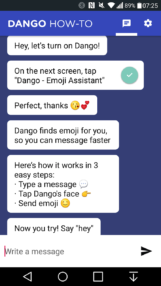 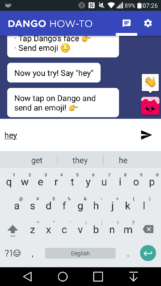 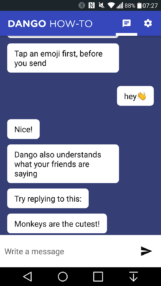 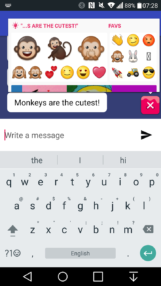 If you're having trouble visualizing how the pop-up window overlays on top of your conversation, the team has a nice video demonstration on its Play Store page to show you how it should work.

Once you're done with the tutorial, you can switch to the Settings pane in the top right corner. There, you'll find all of the options needed to customize your Dango experience, from removing GIFs and/or stickers, to disabling Dango in some apps, allowing it to load GIFs and stickers on a data connection or not, and automatically replacing words with the suggested emoji when you tap it while the cursor is still at the end of the word (no space). 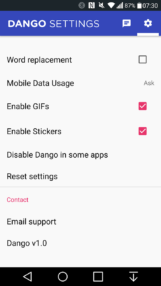 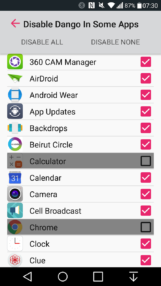 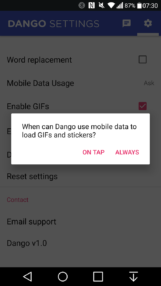 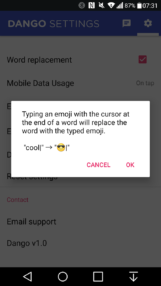 It's all pretty straightforward and should allow you to limit Dango's intrusion to only the instances that you want.

When you're using an app with a text entry box, Dango will pop up whenever your cursor is inside that box. By default, it sits in the middle right of the screen, but you can move it around and even completely take it off your screen if you want to. As you type, Dango will analyze your words to start suggesting directly related emojis or to understand the gist of the feeling you're trying to convey and make recommendations based on that.

You can tap the Dango icon to reveal a panel where the suggested and frequent emojis show up first, followed by a few categories of randomly rotating GIFs, stickers, and then recently used GIFs. You can select any GIF to preview it in a larger format before inserting it. You can also tap any GIF or sticker group to show more items from that same category. 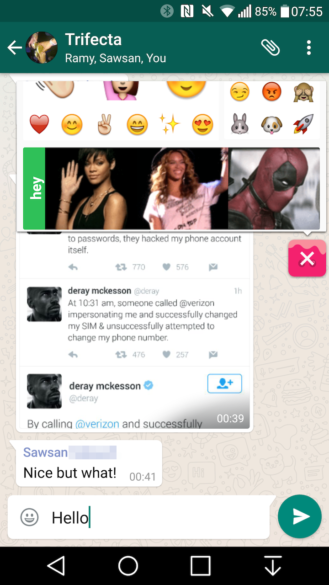 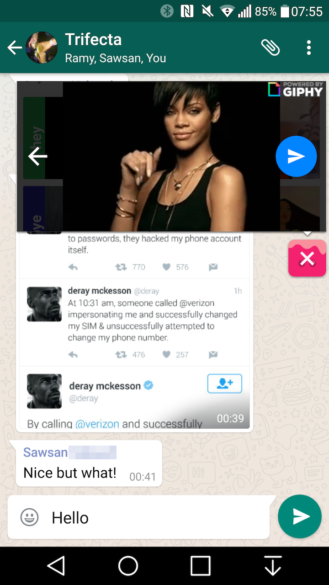 Once you decide on something to send, you tap the blue button and Dango will figure out what to do with your chosen GIF. In WhatsApp, it automatically converts it to a video (because WhatsApp still doesn't send GIFs ARRRRRGHHHHH) and sends it like that. 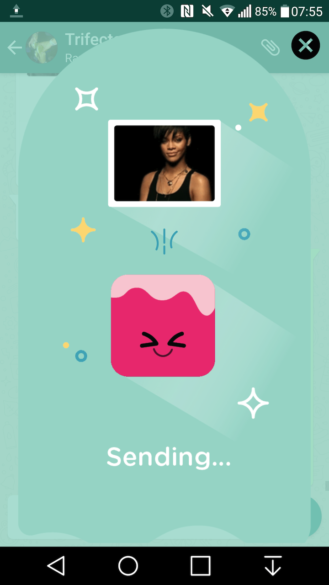 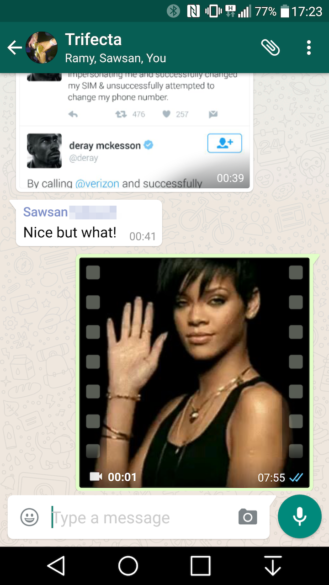 In Slack, it just inserts the GIF's URL in the text box because Slack automatically shows previews of linked media files. 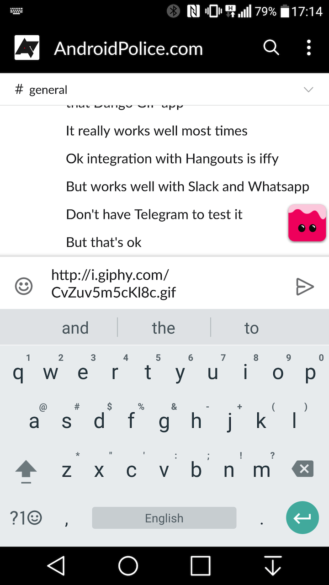 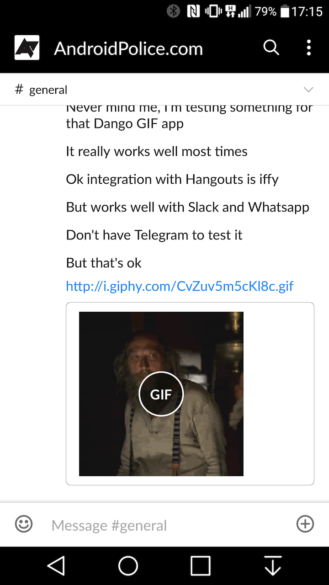 And in Hangouts, it takes the GIF and inserts it as is, because Hangouts can natively send and display GIFs. 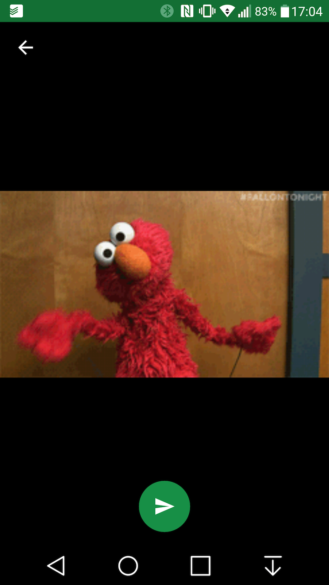 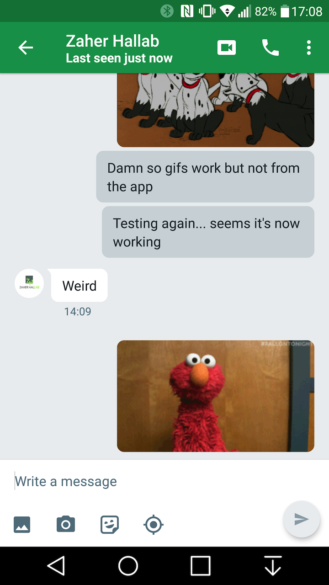 The Dango panel also has a search text box in case the suggested emojis and stickers do not perfectly convey your message. And finally, if you've decided to stop Dango from showing GIFs on a data connection, you'll see an empty box with a manual button to load them. 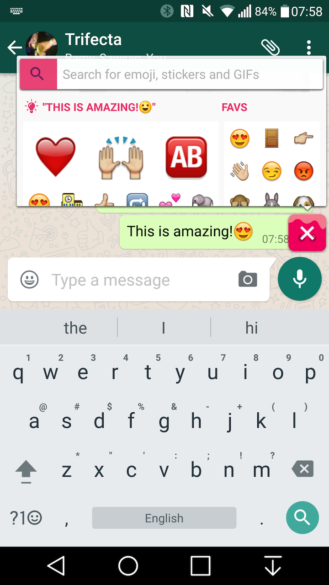 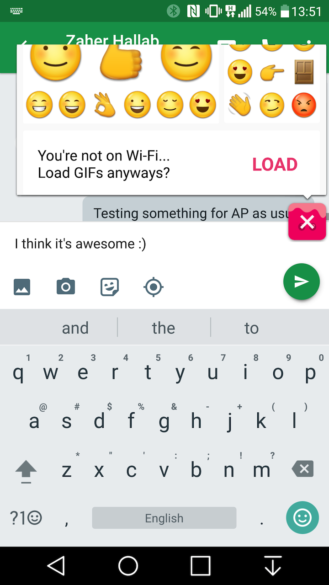 Awesome but still a first-generation product

If you're interested in seeing how Dango works, the Minuum team has written a nice detailed explanation of its use of neural networks along with a demo text box that shows the top suggestions from Dango for whatever you write.

I've been testing Dango for the past few days and I have to say I'm impressed. I've decided to limit it only to a few messaging apps (not even social networks), so as not to be annoyed by the floating icon in every app. I've also tried different permutations and word combos and it all seems to work rather well and smartly. 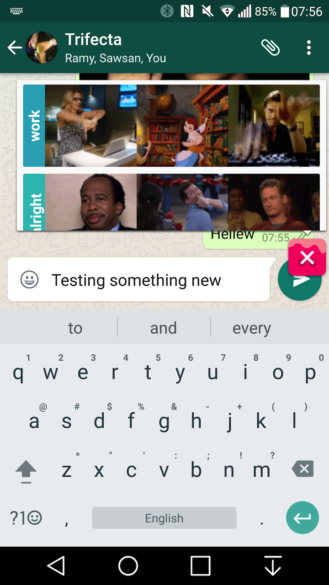 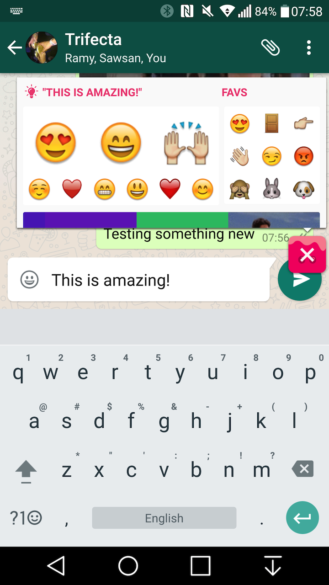 Thanks to neural networks, I even noticed it works with the French and Spanish that I was typing, not just English, although it was the most accurate with single words and became less so as sentences and concepts required more words.

What didn't work that well were the emoji combos that Dango advertises in its Play Store listing and its explanatory article about the app. Sure, I got a queen and a bee when I typed Beyonce, but I had to insert each one separately by tapping the Dango box and selecting them. I don't know if I'm missing something, but it seems like a suboptimal experience.

The other issue I faced was with Hangouts. I'm not sure if it's my phone or some general bug or the way it's designed to work, but there are instances where Dango straight up failed at inserting a GIF in Hangouts, which should be the easiest app for it to handle since it supports them natively. Instead of the GIF insertion screen, I'd get the Hangouts account and contact selection page (as if I was sharing an image file to Hangouts), then after choosing the conversation I wanted to send to, I got a toast message saying it was unable to attach the media file. 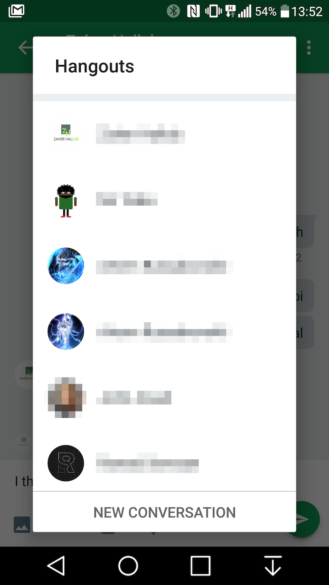 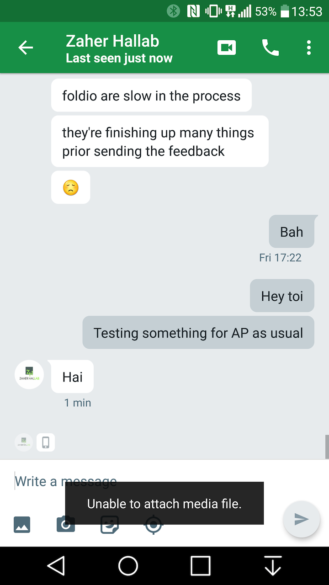 That happened again and again. I tried closing the app and reopening it, switching conversations, and so on. Nothing worked until it miraculously inserted the media file. Then after a few tries, it stopped working without a reason as well. It has flip-flopped from working to not working over several days and I don't like that unreliability.

It's clear that this is still a first-generation product and there are bugs to be ironed out and many potential improvements to the experience. But overall, Dango is interesting, handy, and kind of awesome if you like expressing your emotions with more than words.

You can download the app for free on the Play Store, but it doesn't appear to be available worldwide, in which case APK Mirror has your back. 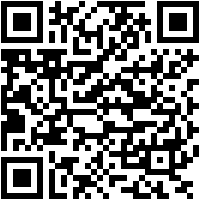 Moto Mod Pricing Leaks In Verizon App, Including An Obscene $299 For The Insta-Share Projector