Motorola announced the Moto Z yesterday with fewer Moto Mod accessories than were previously rumored. There's even an entire phone from previous leaks that didn't make an appearance. According to HelloMotoHK, those are still happening, and there are new-ish images. The phone is code named Vertex, and the remaining Mods were still called Amps when these images were produced. 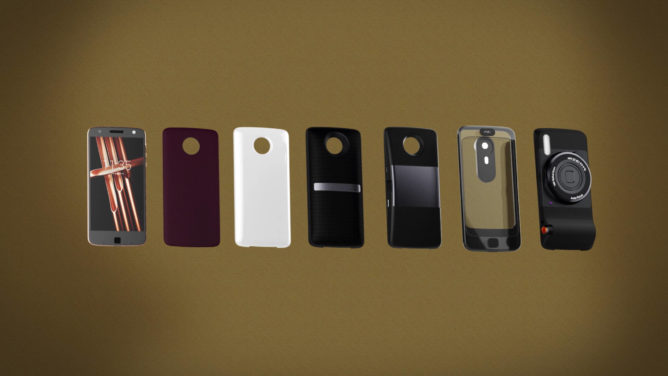 The Play variant of the Moto Z will likely be a less expensive version of the phone. The Z and Z Force have almost identical hardware, save for the shatter-proof display and larger battery in the Force. Previous leaks of the Play pointed to a Snapdragon 625, 2GB of RAM, and 16GB of storage (with a possible upgrade to 2GB/32GB). In the image at the top, the Vector Thin is the Z, the Vector Maxx is the Z Force, and the Vertex is the Z Play. They should all work with the Mods. We saw the camera Mod leak once already, but it wasn't at the event yesterday. You can see that one above, in addition to the Adventure Mod. This is the first time we're getting a good look at that one. It appears to wrap all the way around the device for a waterproof seal. There might also be a macro lens of some sort on the camera. There are some new images of the announced Mods in the gallery above as well.

Facebook Adds 360-Degree Photos On Android, Videos In Comments Too

Video: Our Favorite Themes For The Galaxy S7 & S7 edge