First, I think both phones actually feel of a high quality - the design Moto is going with here is actually a lot nicer in person than I think various leaked photos have given these devices credit for. In particular, I love the black / dark gray versions of both devices - they have kind of a Darth Vader thing going on, if you ask me.

The standard Z immediately strikes you with its incredibly lightness in hand. It's not so much that the Z is greatly lighter than any other smartphone, it's that its lightness is spread across a relatively large and extremely thin canvas, making the phone feel like it's a bit empty (in a good, surprising sort of way - not a cheap way). Motorola's intent here is obviously to give the impression that the comparatively bulky, heavy Motomods don't really add much to such a svelte phone. 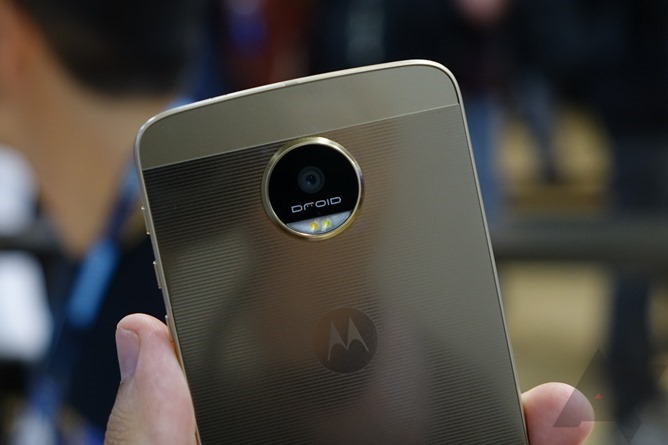 Going around the device, a few things stand out. First: that camera hump. On what is otherwise a smooth, sleek surface, it's quite noticeable. Motorola says this area is actually intentionally so large (in surface area, not in the height of the protrusion) so that future Moto Z devices which are designed to work with current Moto Z Motomods (that's a Motomouthful (sorry.)) will have a good amount of room to play with the camera module area, instead of being stuck with a more restrictive placement and shape. So, there is some thought going into what has largely been billed as an odd eyesore. 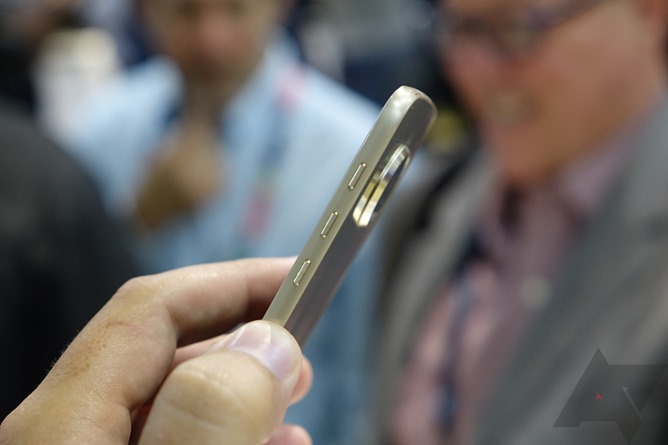 I have to say, my first impressions of the extremely tiny power and volume keys are not positive. They're so small, and I find it irksome when manufacturers place the power key the same distance from the volume down key as the volume down key is to the volume up key. While the power key is textured, simply moving it a centimeter lower on the device greatly reduces the probability of an accidental mixup, and it kills me when phones don't do this (or you just put the volume keys on the other side). Maybe it's a personal thing, though. The front of the Moto Z features Motorola's trademark proximity sensors along with something new - a fingerprint scanner. I didn't have time to test it, but it does wake up the phone and I assume it's about as accurate as any other scanner, so I'm guessing it's fine. Now, some people prefer their scanners on the back, though I find I really have little preference one way or the other.

As for the Z Force, it's basically the same as the Z but thicker, heavier, and features more plastic. Glibness aside, the Force promises to bring the ultra-durable nature of the outgoing DROID Turbo 2 with all of the modern styling and speed of the Z. It, too, features a Snapdragon 820 processor and 4GB of RAM, along with the 5.5" Super AMOLED QHD display, but adds even faster turbo charging, a much larger 3500mAh battery, and the aforementioned "shatterproof" plastic display. The Z Force feels a lot like the Z, and there really isn't much more that I can tell you about it compared to that phone after just a few minutes of using each. 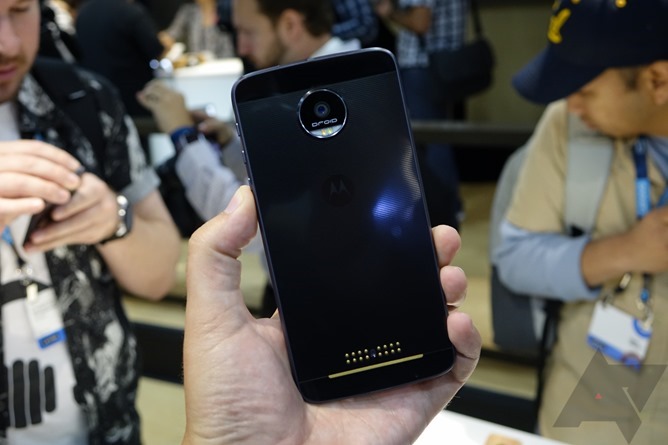 Both phones have Motorola's pared-down take on Android, though both being DROIDs, they have a flotilla of Verizon bloatware preinstalled that the unlocked handsets won't. The new camera app from the Moto G4 is present, and Android 6.0.1 is the operating system. I asked Motorola if, given the unlocked versions don't ship until the fall, we might see Android N on those devices at launch. The answer was an unambiguous "No." 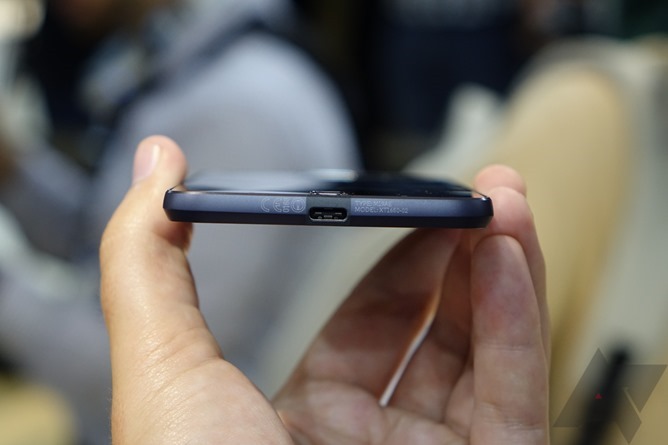 And that leads to the sticky issue many have been keen to point out about these devices: a Verizon-exclusive launch deal that could last upwards of two months. Verizon is no doubt Motorola's strongest carrier partner, though, and the DROID brand has endured over the years. If these phones will sell well anywhere, it's on Verizon. The unlocked Moto Z and Z Force also won't work on Sprint or Verizon themselves, unlike the outgoing Moto X Pure Edition, yet another step backward in terms of compatibility and practicality.

Anyway, let's talk Motomods, because as far as Motorola is concerned, that's the story here. I had a chance to mess with the pico projector, the battery packs, and the style covers. I did see and touch the JBL Motomod, but didn't have a chance to test it out.

The projector is... a projector. The prototype units we were using didn't have kickstands, but the production mods should when they arrive. In a brightly-lit demo area, the projector did work, but it was obviously quite dim and not especially vivid. At 480p resolution, it's also not exactly going to be a replacement for your HD home theater projector. To me, the projector Motomod is 90% novelty, 10% practical use case, and I have a feeling it's not going to be cheap when it finally does come out, which will likely dissuade most would-be buyers. Motorola announced pricing only for the speaker Motomod today, which Verizon lists at $79.99. 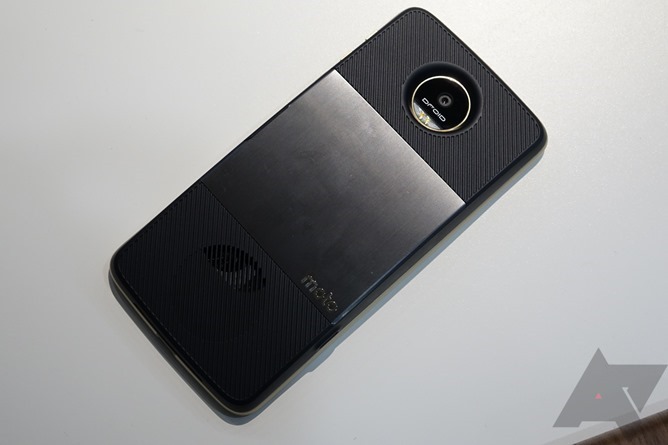 The projector mod in preproduction form

The Power Packs are 2200mAh snap-on extended batteries. The various brands, as far as I know, are functionally identical, and differences come down only to styles and aesthetics. The style covers were actually lauded by a lot of people in the hands-on area, and maybe this just isn't my kind of thing, but I feel like the fact that they can easily be snapped on and off like cheap toys sort of takes away from the "specialness" of Moto Maker finishes and gives them much more of a G4 vibe. Granted, you don't have to buy one, so to each their own - they snap on well and are held in place pretty securely. 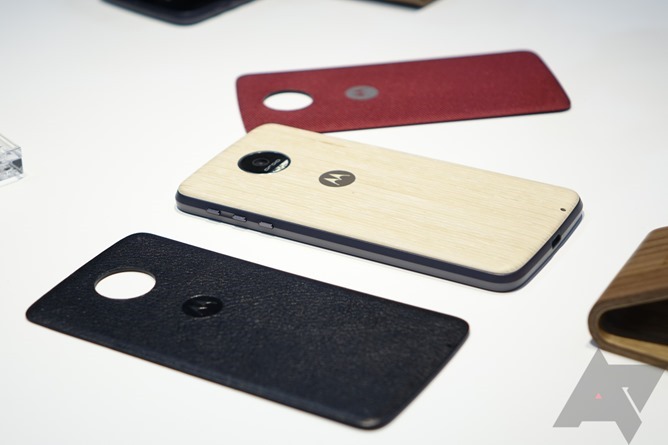 The big question for the Moto Z in the marketplace is going to be whether or not normal consumers actually want to buy snap-on accessories for their likely already-expensive smartphone. Even with Moto's modular solution being far more seamless than LG's janky don't-call-it-Magic-Slot, I'm still not sure many customers will see these accessories as value-adds so much as attempts to up-sell, which frankly, is the business model here.

The Moto Z and Z Force launch on Verizon this summer, with unlocked variants coming to the US this fall. The Moto Z will be available internationally, as well, starting in September. 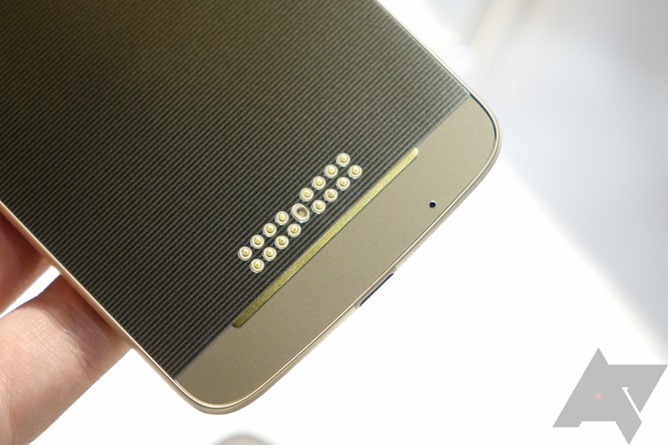