The summer of football competitions is almost upon us, with both Copa América and Euro 2016 starting this month. Google's showing its support by asking users to select which teams they'd like to follow within Google Now.

Euro 2016 is mere days away, with the competition starting in France on June 10. Two cards, one above and one below, have been appearing in the last few days advertising the European championship. One is asking users which teams they would like to follow, listing them horizontally in alphabetical order with a plus in the top right for adding them to get updates. The card only seems to be appearing if a national football team is already followed in Now, although it may appear if a club football team is followed too. The other advertises the start and end dates, as well as the Euro 2016 logo.

Not only is Euro 2016 happening this month, but the Copa América is also taking place in the United States. Google is also prepared for this, with a similar card appearing for users who follow a national team participating in Copa América or a club team who plays its football in a country that is competing. Interestingly, the United States appears first on the Copa América card, while the host of Euro 2016, France, does not on the respective card. 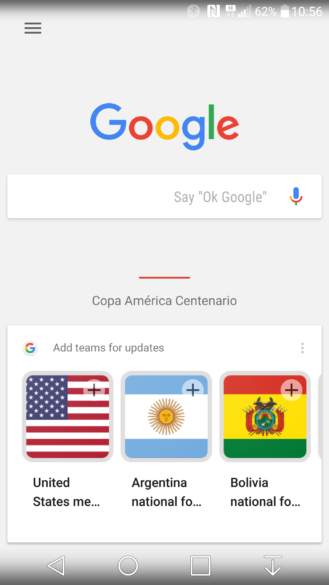 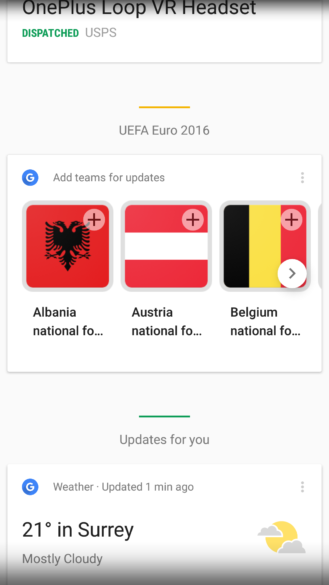 While some of the bigger teams playing in either competition were already included in Now (I already followed the England national football team, for example), the smaller teams, such as debut teams in either competition, may not have had entries in Google's predictive search software, marking the first time the country can be followed for sporting updates.

Euro 2016 starts on June 10th and finishes on July 10th, and is being played in France. Copa América is taking place in the United States, and started on June 3rd and will continue until June 26th.

Google Contacts Can Now Use Phone Numbers To Pull And Auto-Populate Business Data From Maps On ...