Google is constantly testing new features and approaches to getting things done on Android. For example, the new Nearby tab that some users have noticed when doing searches from the home screen search widget. We've gotten a few tips about it, but it seems to be in the early stages of testing.

You can check your device for this mysterious feature by tapping the Google search box on the home screen or possibly in Google Now. If you've got the new feature, there should be a tab for "History" (the standard behavior right now) and another for "Nearby." If you tap on Nearby, you'll get options for restaurants, gas stations, ATMs, and so on.

We don't know for certain what these links do yet as one of our tipsters found the feature was gone when he went back to check. If it's coming and going like that, Google is probably still deciding if it's going to be rolled out or not. We can assume tapping on one of the items in the Nearby list opens a Maps search. It would be silly if it didn't.

Although we haven't highlighted it specifically, Google has also been testing a Trending tab in its Search widget, alongside the History tab. One reader is actually seeing all three tabs when he taps to start a search: History, Trending, and the new Nearby tab mentioned in this article. Google is trying different permutations, it seems, to see which ones work better. Thanks, Jonathan Beckman! 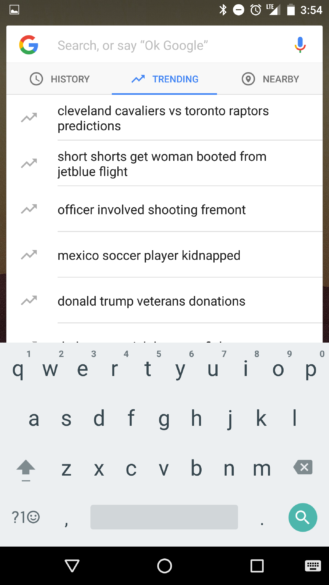 Chainfire's FlashFire No Longer Limited To Beta Testers, Now Available To All On The Play Store