Amazon's Echo has become the de-facto standard of home voice control, at least until Google Home is released and we find out whatever Apple is planning. To emphasise Amazon's market-leading position, the company has published a press release saying Alexa has over 1,000 skills and integrations - we counted roughly 1,150 (115 pages with 10 items on each page). For such a young platform, this is mightily good news, and says wonders about the battleground that the home will be for technology companies in the future. 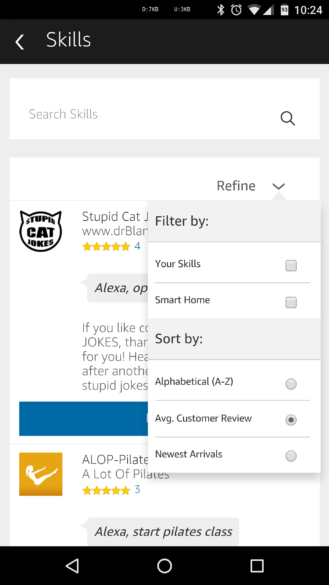 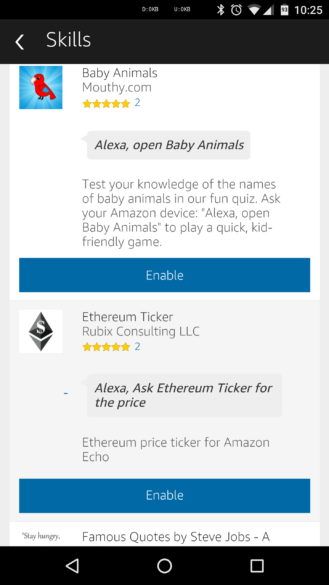 Left: the skills list, showing the filters and sorting options. Right: some other skills that are installable on the Echo.

It's maybe important to note that a good of number of these "skills" aren't really useful, though; a game of voice-controlled Blackjack just doesn't seem like something all that workable, let alone fun. And for all the skills that are worth your while, Amazon isn't doing much to help you discover them at this point. No one, I repeat no one, is going to search through 115 pages of lists looking for that one gem. Until Amazon makes this an actual store, rather than a list of skills with a few filters, having 1,150 skills may actually be worse since people will not be able to easily discover the good stuff among the piles of bad. When the Android Police team were discussing it, Artem pointed out it reminded him of the early days of the Android Market, which is rather poignant, taking into account how giant Google Play is now (and how app discoverability still kind of sucks...).

Still, this is an impressive number, and just goes to show what a hit Amazon has on its hands with the Echo. Now to see if it can maintain that lead when Google and Apple start playing.