It has been a few weeks since Play Music formally launched its take on podcasts, so it goes without saying that there are probably a few things left to be done. An update to version 6.9 takes care of one of the bigger gaps in the functionality by putting podcasts onto its Android Auto interface. Also on the list for this update are some small-to-medium visual tweaks. As usual, the apk is available for download at the bottom of this post if you're interested in jumping ahead of the normal rollout. 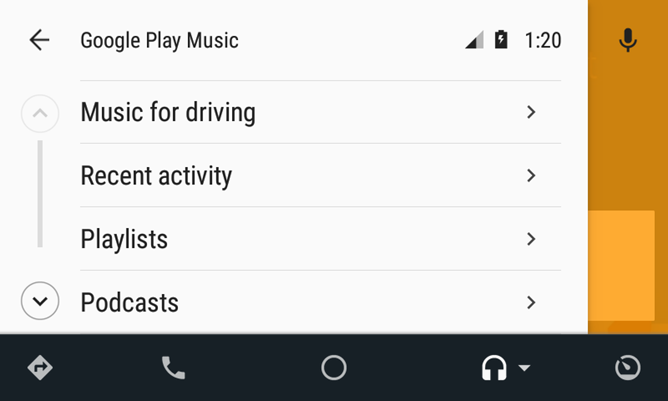 While a lot of people can't see or try it out yet, the big feature-add for this version of Play Music is the addition of podcasts to the Android Auto interface. An entry for Podcasts replaces Queue at the bottom of the first page on the nav drawer. Queue is still there, but it has been pushed to a second page – I doubt anybody will miss it. 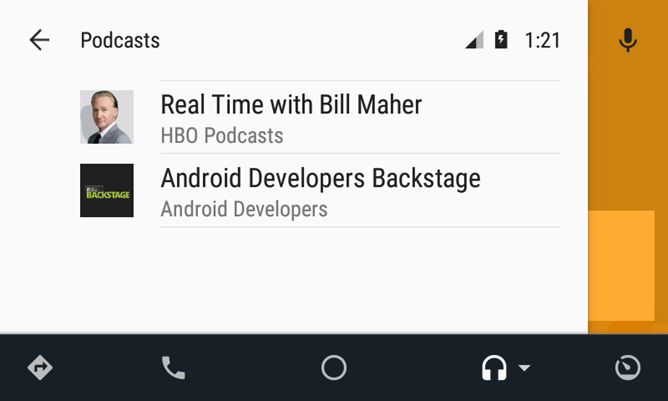 Podcasts look and work a lot like playlists, so there's not much to learn here. Just tap on Podcasts in the nav drawer, then tap on the show you want to listen to. You won't see a step to select an episode, the next (or current) one will immediately start playing. If you do want to change episodes, just hit the queue button (far left) on the player screen and start browsing through the list. 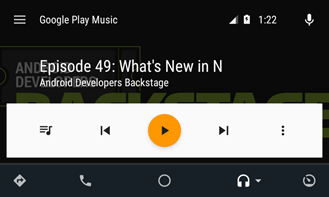 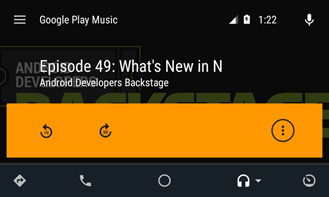 The player interface in Android Auto currently restricts apps to a standard template and allows them to pick which buttons belong in the control area. Aside from the obligatory play/pause button, Play Music's podcast interface includes buttons for the queue and next/previous track skip on the first page. Tap the overflow button to switch to a second page where there are time-shift buttons for going back 10 seconds or forward by 30.

The podcast interface in Play Music is already pretty simple compared to dedicated podcast apps and it translates easily to Android Auto. For serious podcast listeners, this might not quite cut it since there's currently no option to have episodes from multiple shows play back in chronological order or some of the other more advanced features, but it should be plenty for casual users without too many subscriptions. 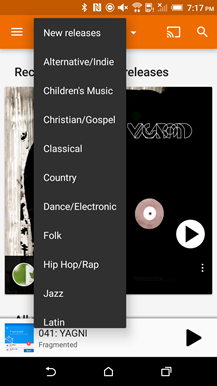 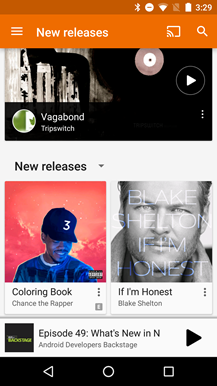 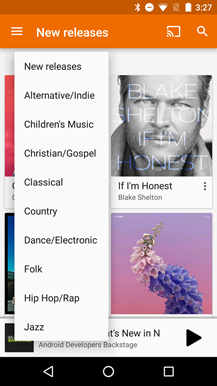 This is a bit of a smaller change, but it's worth pointing out for people that might stumble onto it. If you ever poke around the New Releases section of Play Music, you may have used a dropdown in the title bar to switch to a specific genre. The latest version has moved that dropdown to a less noticeable spot: it now occupies the New Releases title just below the main feature album. This will probably require a very tiny amount of scrolling on medium-sized screens to get that selector into view. Again, it's a small change, but for anybody that uses this feature regularly, it could be irritating to find that it has moved. The change was probably made because the dropdown in the title bar caused the text to look inconsistent on some screen. 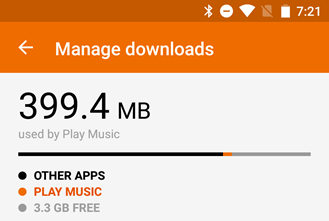 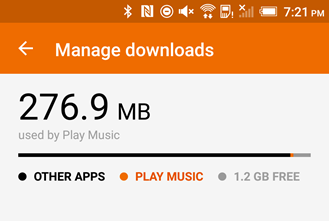 A lot of apps receive cosmetic touch-ups with each update, but Play Music was given quite a bit of attention on this release. Most of the changes are pretty subtle and would go unnoticed without seeing them side-by-side, but there are at least a dozen little tweaks I stumbled onto while looking through this one. For example, the legend in the Manage Downloads screen (above) has been re-arranged to take slightly less vertical space. Look again to the screenshots in the previous section and you'll see that the overflow menu switched from dark gray to white and the Play button on the featured album switched from a white background to a black background with a subtle white outline. Again, there are quite a few of these, but we'll stop here.