It's not often that we have cause to praise Verizon for, well, anything, but credit goes where credit is due. In the last month the carrier has upgraded its branded versions of the LG G Pad X 8.3, DROID Maxx 2, Galaxy S5, and Galaxy Tab S2 to Marshmallow. Never mind that they've come more than half a year after Android 6.0 AOSP code became available, we're just happy to see the updates at all (especially for those oft-neglected tablets). The latest device to get a version bump is the faux-leather-clad Galaxy Note 4.

The Note 4 has been around since late 2014, so it's right in that questionable area when it comes to software updates, especially when carriers are added to the mix. (Incidentally, I wouldn't hold my breath for an upgrade to Android N.) According to Verizon's support page, the update includes Wi-Fi calling for the first time, hi-fi cellular audio, and (like several recent Verizon firmware updates) Amazon Music is no longer a pre-installed app. Nice. 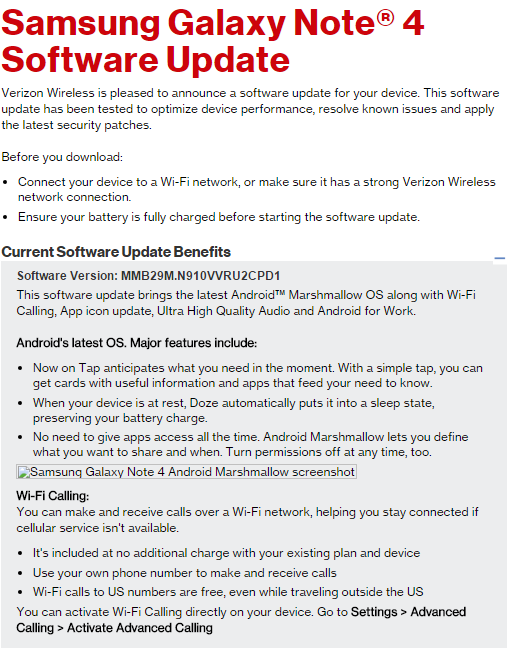 Verizon doesn't say how big the download is, but these version bumps tend to weigh in at about a gigabyte on Samsung phones, so connect to Wi-Fi when you get the alert. Which might be a few days from now, of course... or a week or two. And as always, any modifications to your phone's software might cause the update to fail.

Google Keep Gets A Revamped View On The Web, Plus Auto-Completing Lists, Link Previews, And ...