Apps are getting big - that's one thing no one will deny. With some games reaching more than a gigabyte of space - LEGO Star Wars on my Nexus 6P is 1.17GB - it's becoming an issue for phones with less storage capacity than the more high-end offerings. To that end, Google is introducing an uninstall manager to the Play Store, nine months after Cody discovered its existence in an APK teardown.

We don't know how long this has been live - Google could have just flicked the switch on it, or maybe others have seen it in the past as well. We can't be sure. It works by suggesting a user uninstalls apps that have not been used for a while, because they're taking up space which could be used by other apps or games. It also displays how much space each unused app is using, and how much is needed for the thing that the user wants to install. These aren't the only potentially large files on a device, though, with videos, pictures, music, and downloaded files also taking up valuable megabytes. While the Play Store links to Storage Settings, where these files can be removed, it doesn't suggest uploading files to Google's cloud storage options, such as Google Drive, Photos, or Play Music. 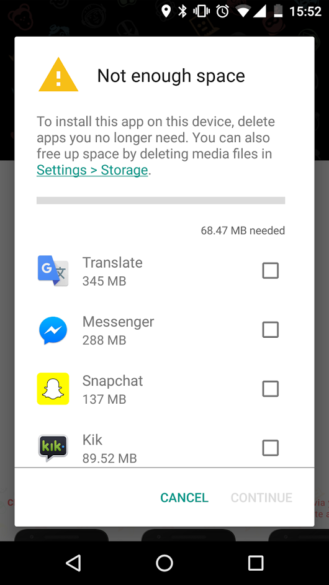 This is, then, a good tool for people who have devices with comparatively small amounts of storage space. Let us know in the comments if you've seen this too.

The OnePlus 3 Will Be Available For Sale Without An Invite, Announcement Scheduled For June 14