Notifications are the bread and butter of our Android experience. Something happens, we get a notification. It could be as urgent as a new email from our boss telling us that we missed a comma in a post (stuff like that has been known to happen when your boss is Artem) or as ordinary as a new Twitter mention or a shipping status change on an order or a new episode available of your favorite series. The difference between how you act on these notifications is huge. You can instantly tap to check a notification or, if you're on Android N, directly reply to it, you can dismiss it without a second look because it's not something you care about all that much, or you can leave it hanging in your notification shade as a reminder to check later.

It's that third scenario that Boomerang wants to tackle. The app takes an Inbox-like approach to notifications, treating them like Google treats emails in its app. Not sure what to do with it now? Save it for later. Don't want to bother with it now, but want to deal with it at a specific time? Set up a reminder. It's simple but efficient and it makes all the difference between a cluttered notification tray of items you don't need to check right away and a clean one that only displays what requires your urgent attention this very moment.

Once you install the app, you get walked through a tutorial explaining its features, its limitations, and the different steps required to set it up. The most important part is that you'll need to give Boomerang notification access to let it handle your incoming alerts. Once that's done the app asks if you want it to work on all of your notifications or just those coming from specific apps. If you choose to go the latter route, which makes more sense than picking everything in my opinion, you'll be presented with a list of your installed apps where you can manually select the ones you want. 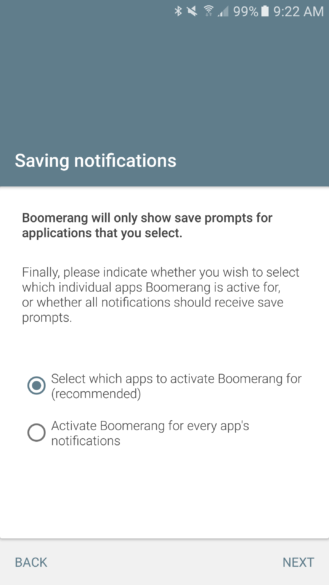 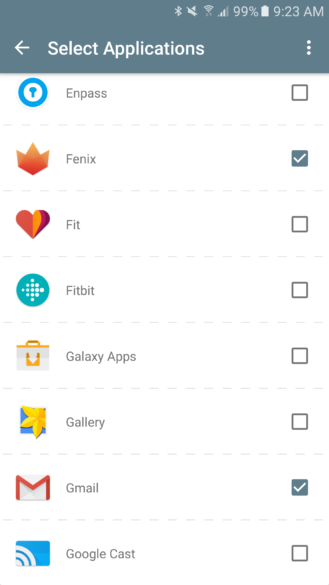 I chose the apps that usually give me the most reason to wish I could hide a notification and resurface it later, namely Gmail, Fenix for Twitter, eBay, WhatsApp, Slack, and a few others. Most of them, as you'll see, are communication apps that can generate several non-urgent notifications that are still important to check at some point.

That ends the Boomerang tutorial and throws you into the app, which is super simple. There's an At a glance screen that shows saved notifications and reminders, a Boomerang screen with all of your saved alerts, and settings, help, and about sections. You can turn Boomerang off, let it remind you of your saved notifications once at the end of each day, access and edit the list of apps to be handled by it, and set how long the save notification option stays visible before it disappears. 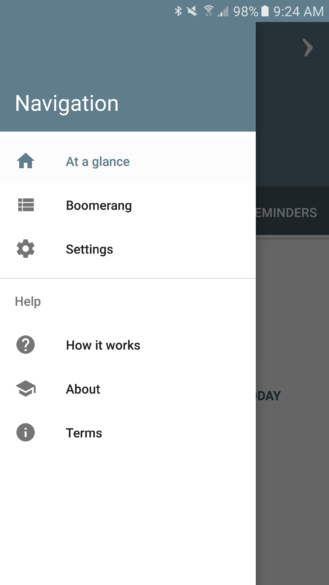 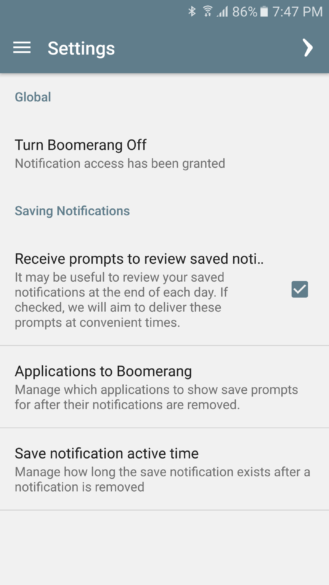 In its default state, you don't see any alerts in Boomerang and the app's own notification shows that nothing has been saved. 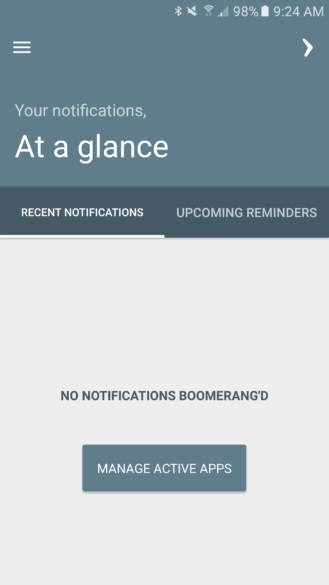 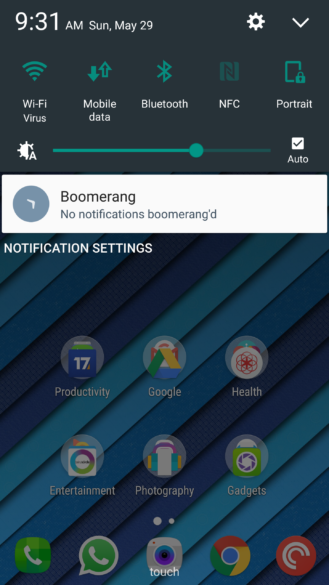 The app triggers whenever you dismiss a notification. It quickly surfaces one to replace it asking you if you want to save the notification you just dismissed or even set a reminder for it for some random time later, tomorrow, or a specific date and time. If you do nothing, this new notification will disappear by itself a few seconds later. 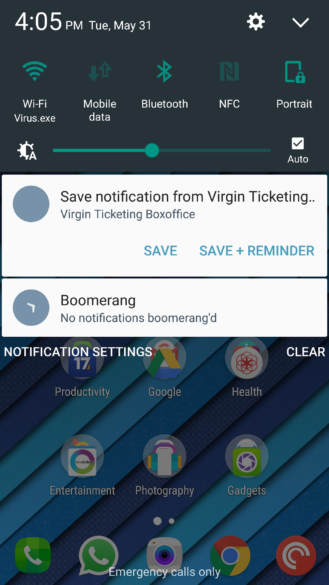 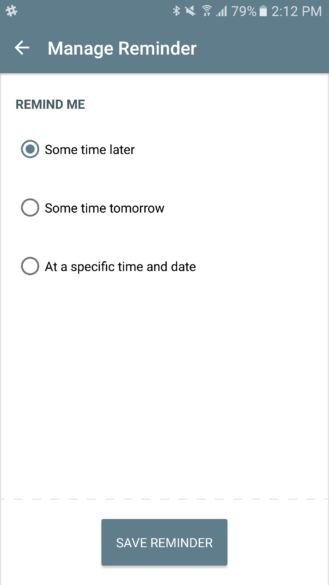 Once you've boomerang'd a couple of items, they'll show up inside the app and in the notification tray. You can dismiss them from the app by swiping them away, just like you're used to. 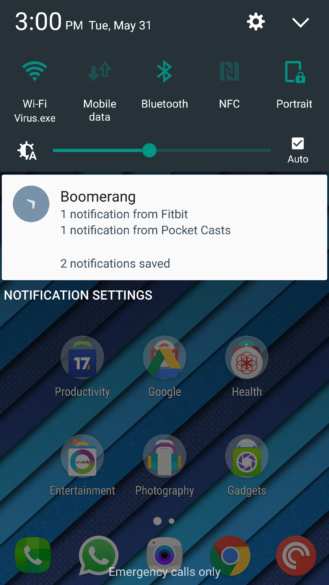 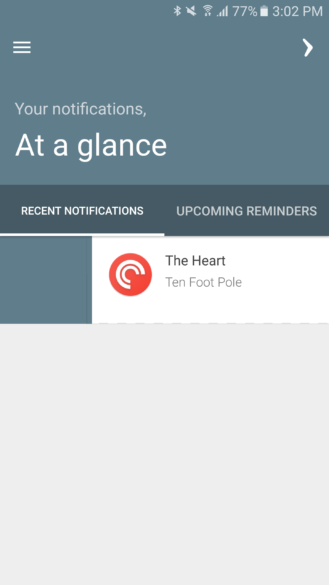 The At a glance screen divides your recent notifications and upcoming reminders and lets you edit the timing by long-tapping on any item. The regular Boomerang screen is just the same, but without the large header up top and divided tabs. It shows more notifications if you've saved quite a few pending ones. 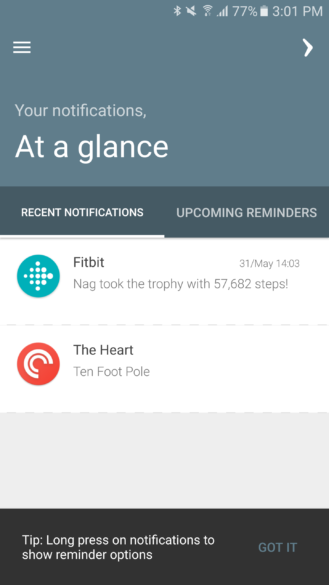 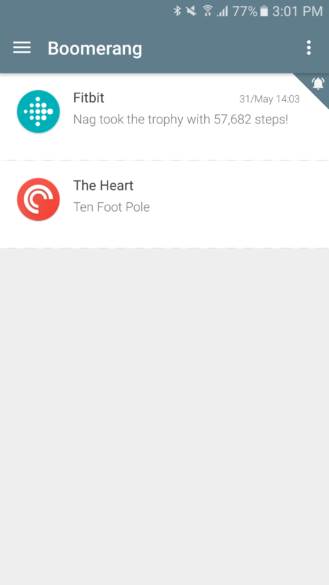 When you reach the timing of a saved notification with reminder, Boomerang resurfaces the notification to you with the name of the app and most of its content. If you read the tutorial fully, you'll know that Boomerang can't handle custom designs and custom actions, so the reply and archive and delete buttons that show up below certain notifications are lost. 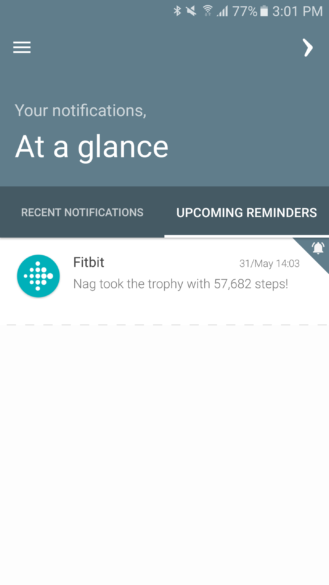 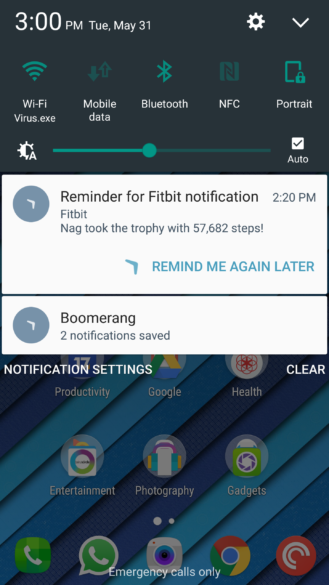 Overall, Boomerang does its job really well. It tries to be as seamless and as invisible as possible, only triggering its save alert when you dismiss a notification from one of your chosen apps, and only resurfacing notifications when you need them. Part of me wishes though that this functionality was built into Android and that there was a gesture to trigger it for any notification you receive, without the need for a third-party solution.