The dream is to have smartphone batteries that can last days upon days of use. The reality is that the more power-efficient our smartphones become, the more demanding we are, perpetuating the status quo of lousy battery life. The band-aid solution so far seems to be the speeding of charge times. Qualcomm has its Quick Charge technology, Oppo has its Super VOOC, ASUS has BoostMaster, and MediaTek has Pump Express. The latter just received a boost to version 3.0, marking the first time it uses USB Type-C Power Delivery instead of VBUS current modulation.

The first benefit of Pump Express 3.0 is that it significantly reduces overheating while charging by bypassing all circuitry inside the phone. MediaTek puts a switch inside the phone that allows the current to circulate directly from the adapter to the battery, thus cutting power dissipation by 50% compared to Pump Express 2.0. The second benefit is the bidirectional communication between the phone and the adapter with over 20 safety mechanisms that monitor the temperature and adjust the voltage for optimal recharging times. 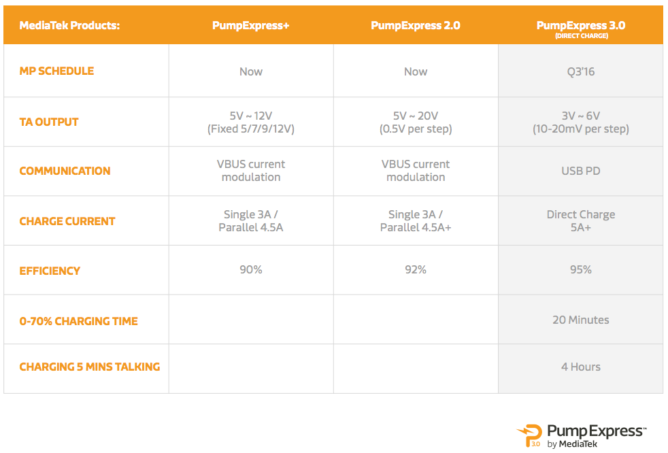 Pump Express 3.0 can charge at over 5A with low impedance, and go from 0 to 70% in 20 minutes. However, MediaTek doesn't point out what battery capacity that is, which makes its stats a little more difficult to interpret. The press release compares this against another competitor and typical charging, saying they usually need 40 minutes and 100 minutes to achieve the same 70% charge, respectively. It's not clear at all who that competitor is or which traditional charging was used (1A or the faster 2.1-2.4A?)

That lack of clarity definitely puts a question mark next to Pump Express 3.0's efficiency. There's a difference between charging a 2000mAh or a 3500mAh battery to 70% in 20 minutes, and MediaTek's test could have been done on either of these or any other capacity below, above, or in between.

Still, it's interesting to see companies innovating with fast charging over USB-C Power Delivery. Qualcomm's Quick Charge 3.0 does not comply with the USB-C spec because it causes VBUS modulation at over 5V, but it seems that MediaTek was able to deliver a high current rate while still sticking with the USB spec.

As to when you can expect Pump Express 3.0 to make its debut, we're not too far off. It should show up in the company's Helio series P20 in devices before the end of 2016 and will propagate to other chipsets in 2017.