Samsung's Gear VR is one of the first available headsets for use with phones, and judging by the various reviews posted around the web, it's a good headset for use with Samsung devices. However, it's missing one thing which both competitors, the Oculus Rift and HTC Vive have: a controller.

If leaked renders that SamMobile has obtained are legit, this might be about to change. The controller shown off in the renders looks pretty standard; an analog stick on the left and buttons on the right. It's covered in black resin, a material maybe similar to the resin found on the back of some smartphones. In the middle there's a menu button and an LED light, that according to SamMobile glows blue when turned on and red when low on battery. 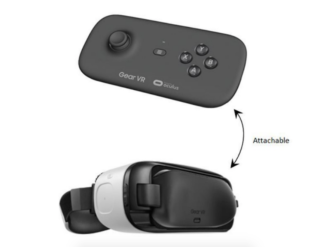 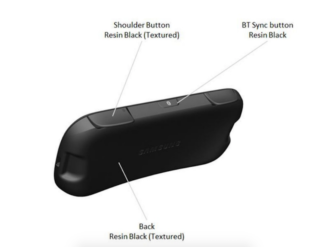 The rest of the device is plain and minimal, apart from two shoulder buttons and a Bluetooth sync button on the top. The controller attaches nicely to the front of the Gear VR headset when not in use, making it a compact and neat solution for controlling games through the headset. SamMobile has no information on pricing or availability, but thinks it'll hit the market sooner rather than later. We tend to think the same - in order to capitalise on the Gear VR's relative success in the nascent virtual reality market, it needs to get these accessories out as soon as possible.