For many users, the choice between unlimited high quality backup or keeping photos in their original condition straight from the camera app is a decision that they don't really care to make. On the one hand, unlimited free storage is very tempting and the photos rarely look any different, even if they have to be resized down to a still very large 16 megapixels. On the other, if you really care about keeping an image at the highest possible fidelity, it's unnerving to risk losing quality to an automated algorithm in the name of saving a little space. It looks like Nexus users may not have to make that decision soon.

The latest Google Photos update includes a some text that describe a very specific benefit for Nexus customers: they will enjoy free unlimited storage for original quality photos and videos uploaded from their Nexus devices.

It doesn't get much more direct than that, right? But you might be asking if it even makes a difference. After all, the highest quality Nexus cameras on the market are only shooting 12.3 MP, well below the 16 MP cap for High Quality. However, there actually are a few big reasons many Nexus owners will want to switch to original quality.

To begin with, the free unlimited 'original quality' storage won't apply to just photos, but video as well. Like photos, the high quality option scales videos down too. The difference is that the cap is set at 1080p. The Nexus 6P and 5X are both capable of shooting 4K video (2160p). Once this new policy is in effect for Nexus devices, full-resolution 4k video will be free to back up.

Another thing many people aren't aware of with the 'high quality' setting is photos and video uploaded through that method are processed to further reduce file size, even if they are already at or below 16 MP. The resolution isn't changed, but some extra magic is performed to cut out even more data. The results are very good, usually looking identical to the naked eye, but there's often some small adjustment to colors or clarity that will be lost in the process, and artifacts may become more visible after zooming in. If you're curious about how this works, there was a spectacular session at Google I/O that dives into image compression. Check it out here.

The previous two points cover the most common situations, but those aren't the only types of images you might capture, there are also panoramas and Photospheres to consider. Both are prone to very high megapixel counts, almost always exceeding 16 MP. These images already seem to get some special attention with the high quality backup option, but making them free to back up in their original quality will definitely help to keep them looking as good as possible.

What about photos and videos that weren't taken by a Nexus device?

Now we get to a tricky question: what about photos and videos that weren't taken by a Nexus device? This may be a question for things like downloaded photos and videos, but I'm predominantly thinking about photographers. Most current prosumer cameras start around 16 MP and quickly climb into the low or mid-20s; there are even some pro bodies shooting over 40 MP. In addition, many cameras these days are equipped with Wi-Fi (either natively or with something like an Eyefi card) that makes it easy to move photos over to a phone for quick editing and sharing. Will these photos be backed up at full resolution and without reprocessing for free if they are simply uploaded through a Nexus device? If so, this could become a very compelling investment for shutterbugs and pros alike.

With all that said, there's no sign of when Nexus devices will gain free original quality storage or if there are any other terms or restrictions. For those that already store at original quality, like I do, keep an eye on your storage quotas and let us know if they ever take a sudden and massive dive. I sure hope this happens before my promotional Drive storage comes to an end next year.

Slowly but surely, albums are becoming more configurable and interesting. We can now collaborate with other people to add photos, add comments, set cover images and titles, add locations, and more. While it's possible to change the order of the images in an album right now, it's tedious and awkward. However, a new set of options is coming with a few automatic sorting methods. The list includes: newest first, oldest first, and recently added. There is also a "custom" option that restores the manual ordering method. 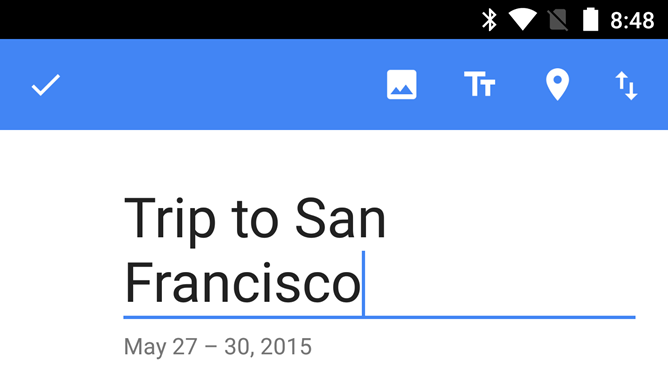 Screenshot modified to add the icon on the far right.

Sorting mode is going to be added as an additional option in the Edit Album screen (open an album and tap the edit button or find 'Edit album' in the overflow menu). It will appear on the far right, after Add Photos, Add Text, and Add Location. It will open a screen that includes the four options, each with a single-line description of the method. A quick mockup is shown above.

While we're on the subject of albums, here's another odd little change that seems to be in the works. According to a pair of strings, device folders will be moving to the Albums view.

The current version provides access to the device folders list in both the navigation drawer and in the albums view. From the sound of this text, it seems like folders may be treated and displayed like albums. This may turn out to be a really good compromise for users that prefer to manually manage photos with folders but also want some of the higher-level features and presentation of albums.

When you want to make extensive adjustments to a photo, you're going to turn to Snapseed, Photoshop, or another serious editor; but for quick and simple color and lighting tweaks, the Photos app has its own editor. If you hit the button to edit a photo right now, you'll see options to adjust Color, Light, Pop, and Vignette. Two new types of adjustments are coming soon: Contrast and Exposure.

Acer Liquid Zest Plus With A 5,000mAh Battery Coming To The US In July