I've owned, used, and abused a lot of USB car chargers over the years. They all do more or less the same thing, and most look nearly identical to every other car charger on the market. When Nonda contacted me asking if I was interested in taking a look at their ZUS dual port car charger ($30), I almost deleted the message.

With a max output of 2.4A per outlet (ideal for Apple products), the charger sports decent charging speeds, but with no Qualcomm Quick Charge technology or Nexus Rapid Charge support, I didn't think it was worth my time to review. Then I read a little more of the press release and discovered that charging speeds aren't what make this a compelling device. There are two other reasons to consider this charger – outstanding build quality and a slick app that helps you find where you parked your car. Let's discuss both.

The press kit for the ZUS sings praises to its German engineering and high quality components such as a German Bayer polycarbonate body and titanium coatings on the metal connectors. Marketing lingo aside, this is a very well-built charger that has both a quality look and feel unequaled by any other charger I've tested to date (and I've had my hands on quite a few). It also allegedly runs cooler than competitors and withstands high external temperatures better thanks to the fancy-named plastic body. I didn't get out a thermometer to measure the thing, but it does stay pretty cool when in use, so I'll believe that claim. The thing is over-engineered to the max, and I love that.

Even the LED lights are better implemented on the ZUS than any other charger I've seen. Instead of being blaring, blue, and distracting, the three white lights at the top of the charger and the ones found in each port are the perfect brightness. They are just bright enough to be seen in daylight to know the charger is connected, but not so bright as to be distracting during night-time driving.

Instead of placing the USB ports side by side at the front like most car chargers, Nonda has opted to have one port facing either direction on the ZUS. This is great for making it easy to distinguish which of my cords is USB Type-C, and which is Micro-USB while keeping my eyes on the road. It does make for a bit messier cord situation though, as the cords want to flop into the footwells of the car when not connected to a phone since they are pointed outward instead of forward.

This minor issue is mitigated by using one of ZUS's own 4ft braided USB Type-C cables that has an L-shaped connection. They are currently being funded on Indigogo and are another example of Nonda's obsession with fancy-sounding, premium materials. The buzz-word here is Kevlar. Strands of the stuff run through the core of the cable, giving it unparalleled strength and resilience, at least according to Nonda. 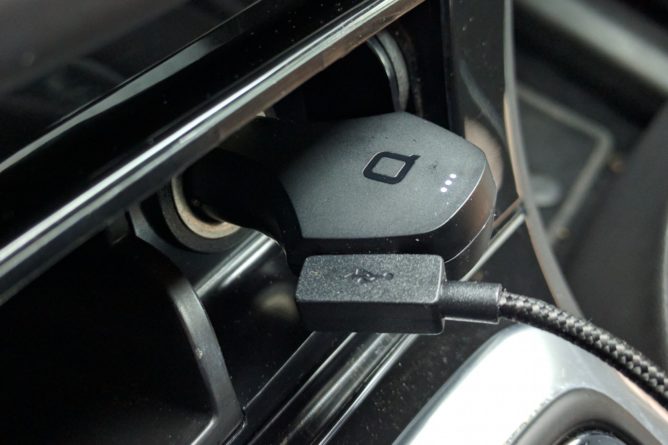 They are so confident that you can't break it that they back it up with a lifetime replacement warranty. That's a pretty sweet deal, as long as the company doesn't go out of business. They sent me one of their cables to check out alongside the charger, and I can indeed say it is very sturdy and certainly looks and feels well made. In fact, it's the nicest USB-Type C cord I've used yet — as it better be for $20. Materials, once again, feel expensive and high-quality, and I can't help but be impressed.

While as a whole I find the ZUS to be a very attractive charger, I do have a couple of reservations about the design. One is its size – it's a little over 3 inches long and more than half that length sticks out of from your car's 12V DC socket. This is quite a bit longer than other chargers and could pose a problem to those who have limited space around their charging port. The other issue is that the charger is prone to coming loose from the 12V socket when one of the connected cables gets tugged, even lightly. That's kind of annoying, but not a deal breaker.

While the build quality is top notch, the real reason to buy a ZUS car charger is to help you find where you parked your car. The ZUS doesn't have any sort of GPS unit, it instead relies on your phone to record your parking location. A mobile application and a Bluetooth connection between the ZUS and your phone are necessary for this to work.

After initial setup, every time you turn on your car, the ZUS establishes a connection to your phone automatically and launches the ZUS app, which runs in the background as you drive. When you turn off your car – cutting power to the car charger, the application takes note of your car's location. You are alerted that your parking locale was successfully recorded with a chirping sound and a notification on your phone. The pop-up notification also gives you the option to set a parking timer, which is a great help if you are paying for your parking spot.

If you park in a place with a poor GPS signal, like a multi-level parking garage, the app will inform you that it was unable to log your location and prompts you to take a picture of your location instead. Not ideal, but it's better than just telling you, 'Hey, I can't mark your location, bummer bro.'

When you are done doing the thing that you were doing at the place where you parked your car, you just open up the ZUS app on your phone and it will guide you back to your car. There are two different ways it can do this, one is by showing you a map with an indicator for both you and your car, the other is a circular ring that points you in the direction of your vehicle. The first option is very similar to Google's own parking location reminder, the second looks quite sleek and futuristic and is my preferred option due to its simplicity.

Now it's time for the important question, does it work? Yes, yes indeed, it works very well. Granted, you need to be in a place where your phone can acquire a GPS connection both when you park your car and when you go to look for it, but as long as that one stipulation is met, it works like a charm. Pull up the app, follow the arrows, and find you car. Simple, and for a person who has a tendency to lose their vehicle in the mall parking lot every time they go to a movie (yup, that would be me) it's actually wonderfully convenient. I'm sure you are wondering why I wouldn't just use Google's parking location card in Google Now. The answer is simple, this just works better. Google Now, for unknown reasons, doesn't always bother to record my parking location, which can be terribly frustrating when you have truly lost your car. I also found the ZUS application to be more accurate and the UI easier to use.

The only real disappointment with the ZUS is that it doesn't support faster charging speeds. The looks, build quality, and app functionality are spot on. I would even go so far as to say that the charger is sexy (can a car charger be sexy?), it wouldn't look out of place plugged in the dashboard of an Aston Martin, Porsche, or a Zonda for that matter. They even make an insane version plated in 24k gold for $499. Don't tell me Mr. Bond wouldn't be all over that (though he may be disappointed that it doesn't dispense poison, explode, or turn into a hovercraft).

Are the pros enough to outweigh the one, albeit rather significant, con? That's up to you to decide. As for me, the ZUS won't be replacing my charger for daily use, but it is going in my travel bag for use on road trips and vacations when I frequently park in unfamiliar places. That being said, if Nonda releases a version of the ZUS with QC 3.0 that will also rapidly charge my Nexus 6, then it would be my favorite charger of all time. Want to grab one for yourself? Follow the link below to buy one at Amazon. 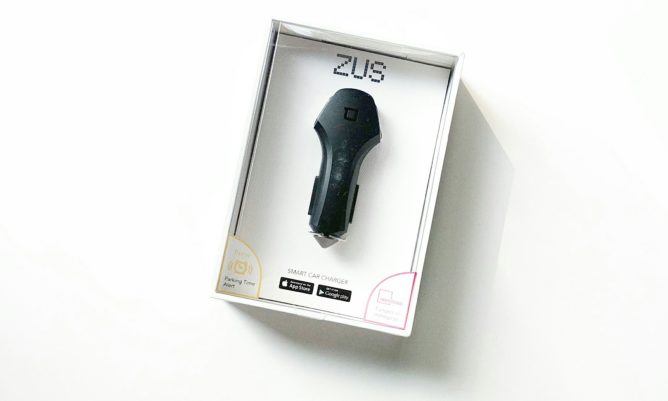