Google Photos is constantly improving and quickly becoming one of my favorite Google services. From shared albums to automatic labeling of people and things, to an exhaustive search function, it's so easy to just upload thousands of photos and let Google take care of managing and organizing them for me. The big annoyance that I kept facing was that plenty of my old photos were tagged with the wrong date and time because they were taken with a standalone camera on which I'd never bothered to adjust the time settings. This resulted in hundreds of photos showing up in the years 1969 (this is not a pun, I swear) and 1980 for some random reason, even though I wasn't even born then.

Google Photos previously added the option to manually change the date and time of a photo, but you could only do it one image at a time. Now multiple selection is possible and, even better, you can either assign a specific time to all photos or just shift their time range so you don't lose their chronological order. That's so smart, I love it.

The option is only accessible from the web interface so you'll have to head over to photos.google.com and select several photos that you want to edit then hit the overflow button on the top right. Choose Edit date & time then pick one of the two options: shift dates & times or set one date & time. 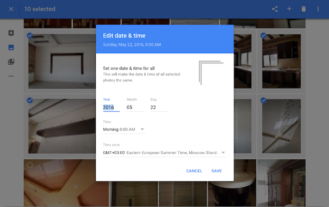 The first lets you set a starting time to which all of your photos will be shifted and will then show you a preview of where those images would fit in your library in relationship to other photos taken during the same time. If you want to adjust further, you can go back and tinker with the dates and times. The second option is much more straightforward and lets you assign a single date and time to all of your selected photos. 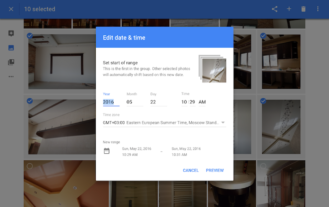 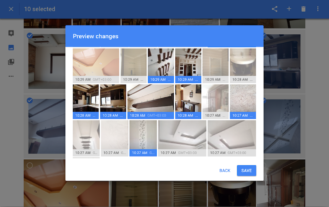 It took me about an hour to scroll through my entire library and find the misdated photos and fix them. Now I no longer have to see those 1969 and 1980 photos and wonder why on earth a digital camera, of all things, had defaulted its time tag to such old years.