We reported on Pebble's site yesterday, noting that it was teasing a big announcement, which we expected to be a watch. (Although we were kind of off on the shape of said new watch.)

Pebble's not launching just one watch, though: it's launching two, plus a whole new product. The two new watches are sequels to the Pebble and the Time. Predictably, they're called Pebble 2 and Time 2. slowclap.gif

The Pebble 2 is a thinner, lighter version of the original Pebble watch that launched on Kickstarter four years ago. It looks pretty much like that watch, with the same sort of chunky but quite good-looking rectangular face and bezels. It's heart-rate enabled and water resistant, so swimming is an option, and can also track sleep, although lying in bed with that on your wrist might get a bit uncomfortable. The screen is 'high contrast black and white', so the battery will go for 7 days on a single charge, which is impressive. The Pebble 2 costs $99 on Kickstarter and will ship in September.

The Time 2, meanwhile, is the 'premium' version. It's got less frame around the screen, and a 53% larger full color e-paper screen than the previous Time. As with the Pebble 2, it is water resistant up to 30 meters and has a microphone for quick voice actions. The battery will last for up to 10 days, a good improvement over the original Time's 7 days, especially with that much larger display. The Time 2 will ship in November and costs $169 on Kickstarter. 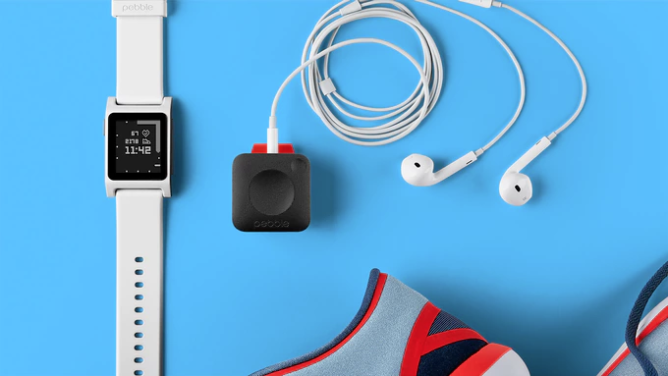 The Pebble Core is maybe the most interesting device launching today, mostly because it's not a smartwatch. Instead, it's a portable, clip-on device for tracking activity during exercise and playing music; think of it as a 2016 equivalent of the iPod Shuffle. It can hook into popular activity tracking services, such as RunKeeper, Strava, MapMyRun, Record, and Google Fit, with more coming in the future. The music comes from Spotify, streamed over a 3G connection; the Core also packs WiFi and Bluetooth, plus GPS for pace tracking. The battery will go for 5.5 hours on one charge, which is probably about as much exercise as an average person does in a week. For a Kickstarter price of $69, it's an attractive proposition, although it will ship in January 2017.

The Pebble Core has an extra button, which is programmable; in true Pebble style, they've named it the 'Pebble Core for Hackers'. It also has a hardware expansion port and brings early access to the SDK. Pebble notes that almost anything can be done with the button, from opening a garage door to ordering a pizza to your current location. The Core runs a stripped down version of Android 5.0, so building on the platform should be familiar for at least some developers. The final new thing is Pebble Health, a new app to sync tracked activity data to your phone. However, it is not clear if Health will be available for Android when it launches, or just iOS.

These three are all available on Kickstarter now. As I write this, the campaign has made over $3.5 million. It will last for the next 36 days, but if you want the early bird prices, (the regular prices are $10 more) you'll have to pledge quickly.