You know how you can usually type some combination of Alt or Ctrl or Cmd with the question mark on your computer to surface a list of available keyboard shortcuts in whatever app you're using? Android is about to get the same option, which is great if you plan on using something like the Pixel C for work.

The trigger for the overlay is Alt + / (on Chrome OS, it's Ctrl + Alt + /). Once you tap that on your physical keyboard, it should show a screen with all of the keyboard shortcuts that are available from the system and your currently used app. Developers can also add their own shortcuts to the list to make it easier for users to see which actions they can get to faster.

Here is the relevant part from the developer documentation:

In Android N, the user can press "Alt + /" to trigger a Keyboard Shortcuts screen that displays all shortcuts available both from the system and from the app in focus. These are retrieved automatically from the app’s menu if available, but developers can provide their own fine-tuned shortcuts lists for the screen. You can do this by overriding the new Activity.onProvideKeyboardShortcuts() method, described in the downloadable API Reference.

To trigger the Keyboard Shortcuts Helper from anywhere in your app, call Activity.requestKeyboardShortcutsHelper() for the relevant activity.

Here's a screenshot of the Keyboard Shortcuts Helper screen in action in the Chrome browser. Thanks Ryan McDonald! 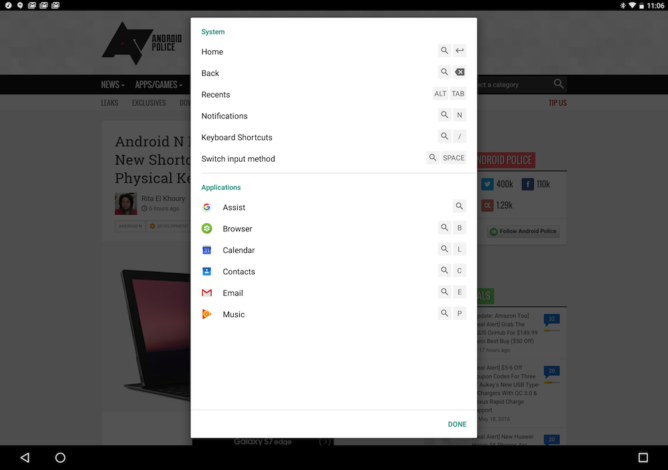 Launcher Shortcuts Are Not Coming To Android N After All, API To Be Removed In The Next ...