Don't get too excited: though they're signed by Google and genuine, neither app is actually working for regular Android users at the moment. Some users are encountering nothing but crashes, others are getting messages like the one below, and others have an option to send a verification code that never comes. 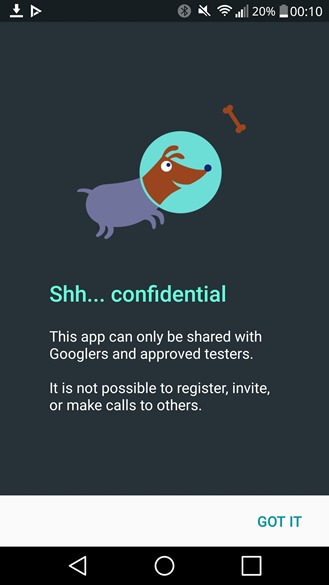 But that wasn't enough for one XDA Developers poster, who goes by the name of Quinny899 and Kieron Quinn on YouTube. He decompiled the Allo app and took a peek around the files inside, eventually making it through the initial access barrier with SQLite Editor to have a look at the app itself. Without a verified connection to Google's servers he could only see the offline portions of the app along with a few dummy conversations, but it's still interesting if you're desperate for some info on Google's ambitious plans for the chat platform.

Here's a quick walkthrough that Quinn posted to YouTube:

But you don't have to take his word for it. Quinn also created a custom module for the Xposed Framework, a tool that allows deep customization for root-level Android users. If you'd like to take a similar peek at Allo, you'll need to use Xposed and Titanium Backup to modify the Allo files on a compatible device. The instructions are spelled out on Quinn's XDA post, and he says he'll have a try at Duo next. Be aware that all of this may stop working the moment that Google sees a bunch of users poking around, and both the module and the Titanium backup file are unverified. Proceed at your own risk.