Hangouts is Google's unified messaging app, but there's something completely new on the way. At I/O 2016, Google just announced Allo. It's a messaging client that's connected to your phone number rather than an email (like WhatsApp). Google has included various smart prediction features, Google Assistant, and of course, stickers (yay).

Google has added a few interesting general chat features to Allo. No longer will you have to use ALL CAPS to express "louder" text. There's a little slider that lets you make your messages larger or smaller—essentially whispering or shouting. There are also plenty of stickers in Allo, sourced from independent artists. These will scale with the "volume" of your messaging. 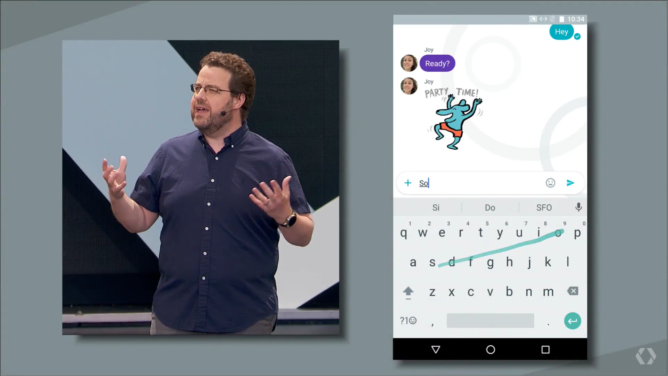 Allo will support smart predicted replies based on your past messages. These will get better over time as you use Allo more, and it can even suggest emoji and stickers. Predictions are also presented based on text and photos. So, if someone sends you a picture, Allo can recognize what's in it and suggest replies. That's not the only smart feature in Allo, it also has Google Assistant built-in. This is basically the long-rumored Google chatbot.

Assistant in Allo gives you access to Google services and data inside your chat. You can have the bot pull up map data, photos, and more for everyone to see. Google also demoed OpenTable integration for making dinner reservations. If you want to talk directly to Google Assistant, it can pull up data for you in a conversational way. Ask it about sports, movies, or whatever else. 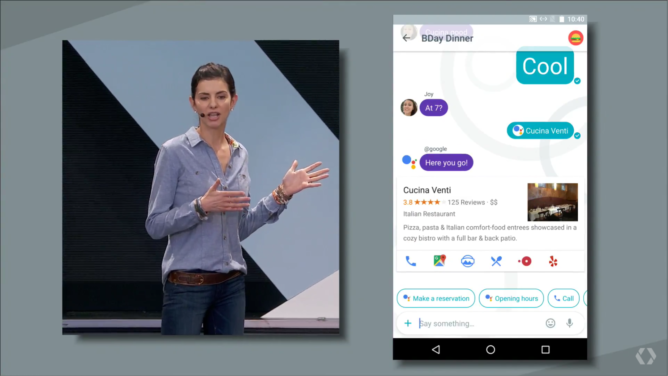 On the privacy side, Google points out that Allo is end-to-end encrypted. You can also start incognito conversations in Allo that expire. Deleted chats are also deleted forever. 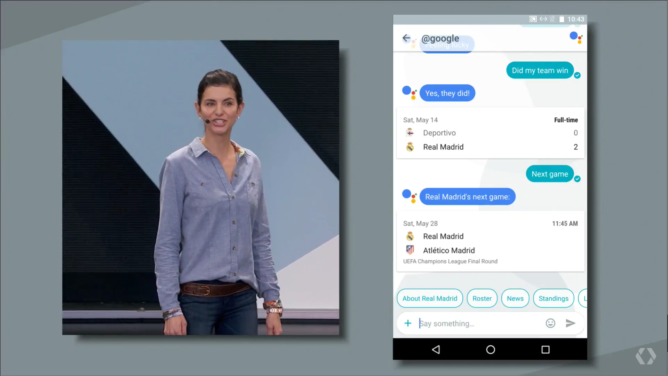 Allo will come out this summer to Android and iOS, along with companion app Duo. What this means for Hangouts is unclear, but it can't be good.

Allo lets you communicate with anyone in your phonebook—both Android and iOS. #IO16 pic.twitter.com/nhpxGJDRGP

The Play Store page for Allo is live, but it's only pre-registration right now.

Google Research has posted more info about how Allo comes up with suggested replies for text and photos.