Watchfaces will gain the ability to show data from other apps, customizable to the wearer's tastes. The demo on the I/O stage included a watchface with three separate segments ("complications") showing calorie counts from Lifesum, stock information from Robinhood, and a task count from Todoist. Each of the complications can be tapped to launch into the appropriate screens on the related apps. These sound a bit like widgets, but they clearly have consistent colors, which suggests a highlight color can be chosen to apply to each one.

Messaging on the wrist is going through something of an overhaul. Google is planning to add or improve three input methods so responses can be done in whatever way is most appropriate to the situation. The first addition is called Smart Reply, which includes a set of suggested responses based on the context of a conversation. Google is also introducing a gesture keyboard that looks mighty similar to the Google Keyboard for phones and tablets. The third input method is a handwriting keyboard that scrolls as you draw letters and numbers with your finger.

None of these will replace voice dictation, but they will make good substitutes if you're trying to respond to a message while there is a lot of noise or if you're not in a place where speaking to a watch is acceptable.

Fitness tracking is about to become almost fully automatic as the full Activity Recognition features of Google Fit are coming to Android Wear. Now when you start a run or hop on a bike, the sensors in your watch will detect that you're up to something and apps can begin tracking it.

Activity tracking is just where the Google Fit integration begins. Apps will also be able to exchange data right on the watch, so things like food logs and exercise trackers can work together to determine just how many calories you've gained or lost throughout the day. 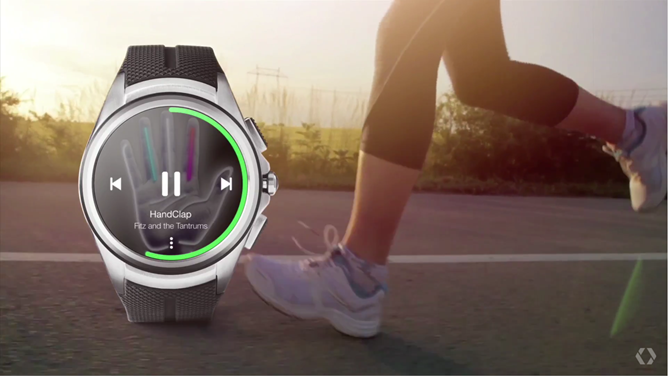 Standalone apps aren't entirely brand new to Wear, Google has done it with a few of its own apps like Messenger. However, full network access will be supported for third-party apps on Wear 2.0. This means that if they can gain a connection via Bluetooth, Wi-Fi, or cellular signals, they will be able to reach out to the cloud just like apps on your phone. Additionally, APIs for Google Cloud Messaging, Account Manager, and others will be directly accessible. This can significantly improve the usefulness and efficiency of apps when your phone isn't nearby, and it opens up a whole world of possibilities for iPhone users that have decided to go with Wear on their wrists.

The card stack interface on Wear has served pretty well since its inception two years ago, but it's time for it to evolve. An updated design is in the works for the system UI, notifications, and app launcher that will make them faster and easier to use. The style is also going to integrate a darker color palette and more Material Design elements for the OS and apps going forward. 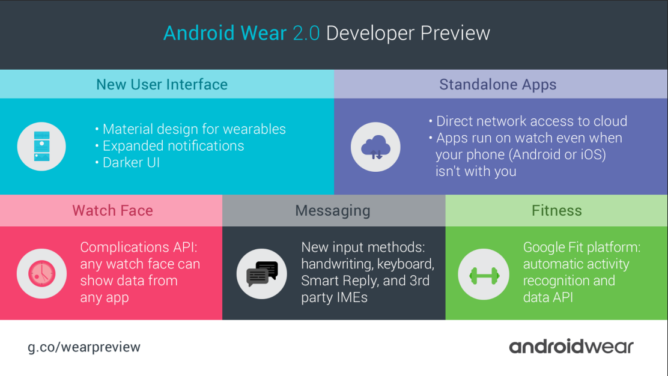 The success of the developer previews for phones and tablets has clearly not been lost on Google. Android Wear will officially join the fray with its own preview SDKs and firmware images. The schedule for releases is set up to come in stages similar to those for the N Preview, but on a later schedule. Signups aren't necessary to put the preview images on a watch, it's done entirely with manually flashed firmware. However, images are only available for the Huawei Watch and LGE Watch Urbane 2nd Edition.

A video has been posted to demonstrate some of the new UI elements and many of the new features.

The preview SDK and firmware images are available right now. Just head over to the g.co/wearpreview and read about the details for setting everything up and getting started. Each milestone release should come about every six weeks, and the final release of Android Wear 2.0 is planned for Q4 of 2016.