The unlocked HTC 10 is just starting to show up on doorsteps, and HTC has an update ready to go. The OTA started rolling out a few days ago, but now there's also a full RUU for manual flashing. HTC only lists this as a bug fix update, but the changelog includes more detail.

The OTA is almost 400MB and will include camera improvements, WiFi stability enhancements, and better general system stability. It only takes a few minutes to update, but I should note updating my review unit caused the phone to lose its default home screen. It just showed an HTC logo on a blank display until I went into settings to select one. Hopefully that's not common. 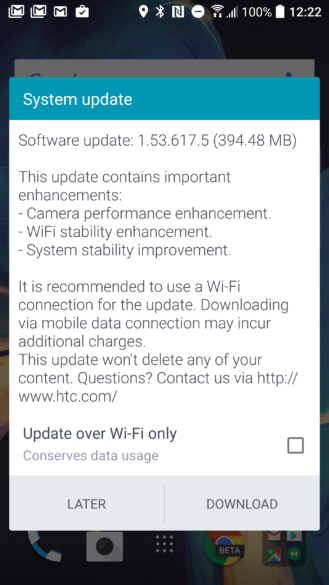 That should appear on your device soon if it hasn't already. However, there's also the new RUU for manual updates over USB if the OTA isn't found. This is a 1.6GB download and unlike the OTA, it will delete all the data on your device.

PSA: The Google Dialer Works With Many Non-Nexus Phones Now [Update: Not Anymore]