We've covered Remix OS before, which is Jide's project to mold Android-x86 into a desktop OS, like when they released the Remix Mini plug-in PC. It is a really quite interesting and polished take, borrowing heavily from Linux and Windows 10 design language with your familiar Android apps existing in a windowed environment. While Jide has made it available to download onto your laptop or desktop (and tablets like you would do with Cyanogenmod or similar), they now have a new hardware partner in AOC. The Mars will be a 24" all-in-one PC that runs Remix OS out of the box.

You might be saying, "hmm, AOC sounds familiar." That's because AOC is the company that made that one refurbished computer monitor you almost bought at a crazy low price at Newegg or some similar place. With AOC not being big players in the full computer setup market and clearly being fond of tight profit margins, this seems like a natural pairing.

While I can already hear the chorus of "if you want free, just get Ubuntu/my favorite Linux distro," let's remember that one of the big selling points of any OS is the third-party software it supports. Some people will never switch from Windows to Mac because they have to have [insert software here] that only runs on Windows, or vice versa. And the constant criticism of Linux is lack of third-party software.

While the Play Store doesn't have software to replace some of the stuff power users want on a desktop, Remix OS gives access to a comparably huge library of apps unlike most other free desktop OS options. 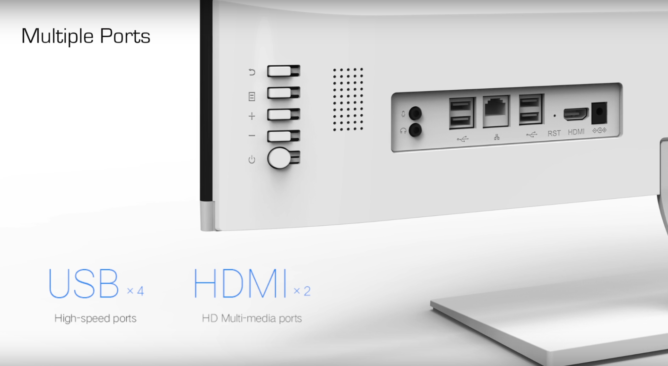 Details are a little light in terms of hardware at this point, but as you can see in the screencap above there are 4 USB 3.0 ports on the backside as well as two HDMI ports and an ethernet jack. Jide says this PC has an Amlogic S905 SoC, which is a 64-bit, 4-core Cortex A53 chip that is designed for media set-top boxes. It is, to be clear, far from a high-end piece of hardware. This PC is outfitted with just 2GB of RAM and options of either 16GB or 64GB of storage.

In an interview, a representative of Jide clarified that this all-in-one will be released in the Chinese market soon as well as to some enterprise customers outside that market. He didn't rule out other markets, but they are clearly unsure of their plans in that regard. Their booth at CES Asia also had a 32" model—also made by AOC—which Jide says is still in development and does not have a timetable for release.

It may be a while before any of these consumer-oriented PCs with Remix OS reach western markets, but by the looks of it this model may have the same downfall as the Remix Mini: good software on weak hardware. In the meantime, if the software seems promising to you, chances are you have a device that can run it already.

May 11, 2016 (Shanghai, China) - Jide Technology, the team behind Remix OS, today announces a partnership with AOC, a global leader of HD display technology to develop and produce a 24” all-in-one (AIO) PC. This is going to be the first AIO PC, aimed at the enterprise market, running Remix OS, as the company continues to push forward the future of Android PCs. The Remix OS AIO computer will be on display for the first time at CES Asia 2016 in Shanghai.

Remix OS is a productive version of Android, offering multiple resizable windows, true mouse and keyboard support, and advanced file manager to enable users to create content as easily as they consume content. On the AOC AIO PC, Remix OS truly takes advantage of the bigger screen real estate available so that users can get multitask efficiently.

Jeremy Chau, Co-Founder of Jide Technology says, “This partnership shows off the potential of Android PCs, by putting Remix OS into another form factor. In fact, it was based on interest from enterprises that encouraged us to develop this device with AOC. Again, our community of users have been spreading our story and again, we advance Android PCs because of their support.”

Ren Jingshun, AOC’s B2B General Manager states, “We’re really excited about this partnership with Jide Technology and Remix OS because we believe the AIO will go far in bringing Android PCs to the enterprise market. The cost savings, the familiarity and the productivity experience you get with the AOC Remix OS AIO will really be advantages for enterprise users.”

The AOC Remix OS AIO will be available first in the Chinese market in Summer 2016.

To keep up with news on the availability of the AOC Remix OS AIO in markets outside of China, please leave your email here: http://remix.jide.com/AOC_allinone

To try out Remix OS while waiting for news on the AOC Remix OS device, a free download link can be found here: http://www.jide.com/remixos-for-pc#downloadNow