Logitech is unveiling a new product today, and its exclusively for Android with the aim of making it easier to use your phone in the car without distraction. Logi ZeroTouch is a smart car mount with included voice control app. And yes, you need one to use the other. These two things are not usually so intertwined, but ZeroTouch is an unusual product. Would you like to know how unusual? Read on.

ZeroTouch is available as either a dash mount or a vent clip-style mount. The dash version is going to cost $80 and the vent mount will be $60. ZeroTouch also refers to the app available via the Play Store. It's free, but it won't work unless you also have the dock, which pairs with the phone via Bluetooth. The way it does this is actually pretty clever. 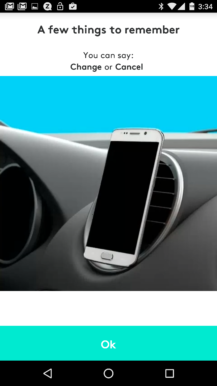 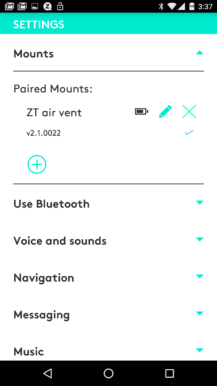 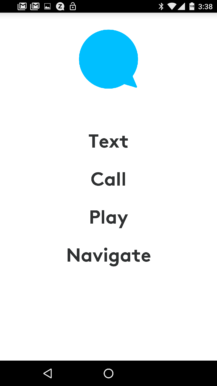 Your phone attaches to the magnetic mounts with the aid of a small metal tab that sticks to the back of your phone. The mount will remain off until it detects that metal tab has been connected (it's really just sensing any strong magnetic attraction). At that point, the dock wakes up and pairs with your phone to activate the ZeroTouch app. The dock itself is basically just a trigger mechanism.

Logitech is serious about not touching your phone while driving. They're even more ruthless about paring down functionality than Android Auto is. To trigger a voice command, all you have to do is put your hand up to the proximity sensor on your phone for a second. That wakes the screen and opens the ZeroTouch UI. This gesture can also be used to cancel an action, or you can just say "cancel." 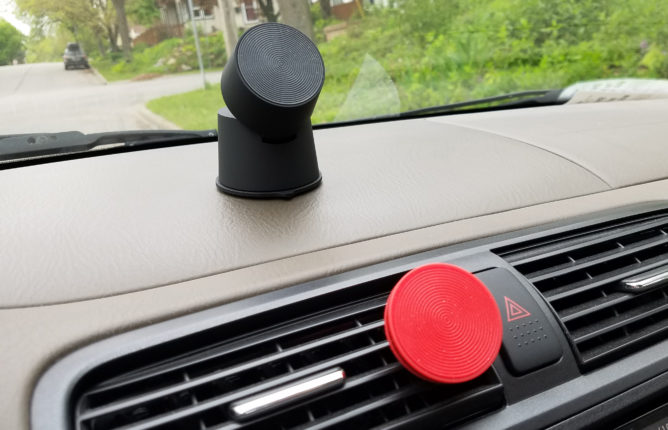 The vent and dash mounts.

ZeroTouch includes access to features like SMS, music, navigation, calls, and location sharing. It's a front-end for the things your phone already does, with a more focused feature set than Google's standard voice commands.

I will say upfront that I'm not a big fan of sticking things to my phone—I don't even use cases most of the time. The ZeroTouch mounts come with two magnetic tabs, one small and silver and the other larger, flatter, and black. The small one will be what most people use, but those with cases might be able to get the black one attached on the underside of the case.

The adhesive seems semi-permanent. I was able to pry it off of a phone with some effort, and it didn't leave any residue. You will need to make sure you don't place this tab over top of any wireless charging coils or magnetic cover sensors, though. If you do use a case, I think the flat black connector is the best bet as it's not going to be visible. I will note that since this is Bluetooth, you can set the dock to toggle Smart Lock, which is handy. Both mounts seem sturdy and the dash version sticks in place as well as any other mount I've used. The magnets are super-strong too; the phone won't go anywhere. 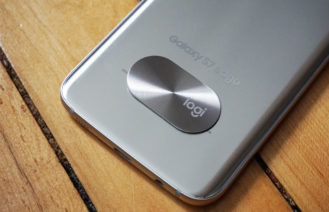 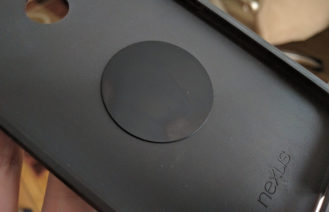 When docked, the app launches instantly and the hand gestures are usually picked up well. I prefer the wave setting, which doesn't require you to hold your hand in front of the sensor for as long. I was initially confused about where these docks were getting power. After all, they paired over Bluetooth and there's no charging port. Well, the answer is super-weird. You don't recharge them ever. These docks come fully charged with enough juice for two years of use for a few hours a day (so says Logitech). When they're dead, you have to buy a new battery and replace it. Don't get too up in arms here. These docks use standard CR2016 batteries, which cost under $2. Assuming they last as long as Logitech says, I don't see this as an issue.

As for the functionality, navigation works fine. You can just tell the app where you want to go, and your preferred navigation app opens. Calling is straightforward too. Tell the app to call someone in your contacts, and it'll happen.

Music is reasonably good as well, at least as far as voice commands go. It has integration with Spotify and Deezer, but the basics all work with Play Music (what I use). I can start playback of artists/songs, pause, skip tracks, and so on. Deeper integration for things like playlists will only work with the aforementioned services.

Messaging in ZeroTouch is a bit weird. You can only start new conversations via SMS. Logitech has a safety justification for this, but I really don't get it. If you send a message to someone, it'll be an SMS. However, ZeroTouch can intercept, read, and allow you to reply to messages from Hangouts, WhatsApp, and Facebook Messenger. 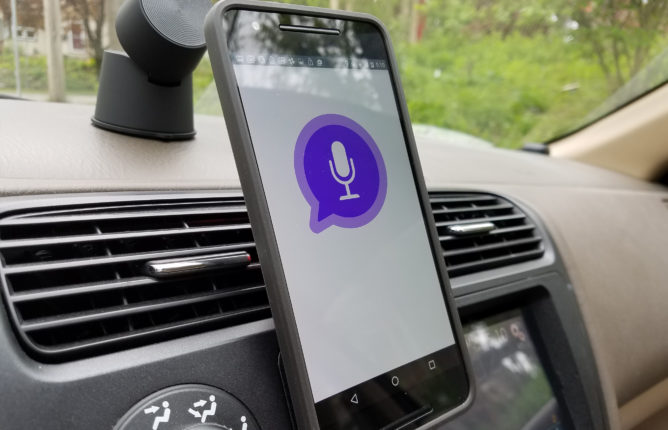 ZeroTouch seems to get most commands right, but it doesn't do many things. You'll be able to nail down its foibles eventually. For example, "skip" won't do anything when playing music, but "skip track" does what you'd expect. Since the app is in the Play Store, it can improve over time, and it does have some improving to do.

So, is Logitech ZeroTouch a thing you should buy? Based on my time with it, I have a hard time telling anyone to go out and buy it. $80 is a lot for a dash mount, even if you add in all the voice control features. With OK Google, you can do some of these same things without touching the screen. Yes, it can be more distracting and occasionally requires a tap, but I don't know if anyone's going to think $80 is a reasonable amount of money to avoid that.

ZeroTouch is neat, but I'd say the cheaper vent mount is the way to go if you want to try it out. You should also consider how you'll attach it. If you use a case, the thinner tab will work with no drawbacks, but sticking that metal puck to the back of a naked phone is going to be a deal killer for some. 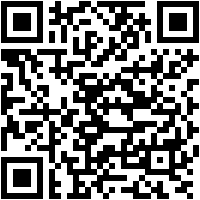 Logi ZeroTouch Turns Any Car Into a Hands-Free Connected Car

NEWARK, Calif.--(BUSINESS WIRE)--Today Logitech (SIX:LOGN) (NASDAQ:LOGI) introduced the Logi ZeroTouch™ Air Vent and Logi ZeroTouch Dashboard smart car mounts for Android™ smartphones that trigger Logitech’s voice-controlled app when you dock your phone in the car. With this combo you can hear and respond to an incoming text, and operate select apps such as navigation and music, completely hands free. Together, the car mount and app give you the best features of a connected car, without buying a new car.

The Logi ZeroTouch: A car mount and app that gives you the best features of a connected car. http://blog.logitech.com/?p=24768

Tweet now: Introducing the Logi ZeroTouch: A car mount and app designed to give you the best features of a connected car. Learn more:http://blog.logitech.com/?p=24768

“New car owners can experience the luxury of a connected car, but there are still tens of millions of older cars on the road,” said Bracken Darrell, Logitech president and chief executive officer. “As we look for ways to design products that are thoughtful solutions to human needs, we realized there was an opportunity to turn any car into a connected car. The result is the Logi ZeroTouch. The smart mount and app work together to give you the best features of a connected car, while keeping your eyes on the road. We believe ZeroTouch will play a crucial role in turning the look down and text, into the look up and talk.”

To get your car connected, simply snap your phone to the magnetic air vent or dashboard mount to automatically trigger the Android app, and speak freely. You can use your voice to place calls, text back and forth, stream music using Spotify®, initiate directions with navigation apps, such as Google Maps™ mapping service or Waze, or easily share your location with friends and family through Glympse® location service – all without ever touching your phone.

Through natural language understanding, using the app feels like talking casually to a person next to you in the car. A simple hand gesture quickly wakes up the app to initiate a text or command, and to eliminate errors, the app reads your text back before sending. The app automatically informs you of incoming texts, and you decide if you’d like to listen, respond or cancel without ever looking at or touching your phone. Or, depending on the streaming music app, you can request specific artists, songs, playlists, or genres, and give commands like “pause” and “skip.”

The ZeroTouch Air Vent and ZeroTouch Dashboard mounts are available today at Logitech.com and Amazon.com for a suggested retail price of $59.99 or $79.99 respectively. For more information, please visit Logitech.com, our blog or connect with us on Facebook.

Logitech designs products that have an everyday place in people's lives, connecting them to the digital experiences they care about. Over 30 years ago, Logitech started connecting people through computers, and now it’s designing products that bring people together through music, gaming, video and computing. Founded in 1981, Logitech International is a Swiss public company listed on the SIX Swiss Exchange (LOGN) and on the Nasdaq Global Select Market (LOGI). Find Logitech at www.logitech.com, the company blog or @Logitech.

2016 Logitech, Logicool, Logi and other Logitech marks are owned by Logitech and may be registered. All other trademarks are the property of their respective owners. For more information about Logitech and its products, visit the company’s website atwww.logitech.com.