Nexus phones tend to last a while, at least in terms of software - thank Google's spot as the gatekeeper of Android for that. I'm still using my Nexus 6, and will probably continue to do so when the 2016 models come in and it passes the two-year mark. The previous phone, LG's Nexus 5, is coming up on three years old, but it still has access to the latest version of Android with new security releases every month. It's still a great budget phone, especially for enthusiasts and developers. 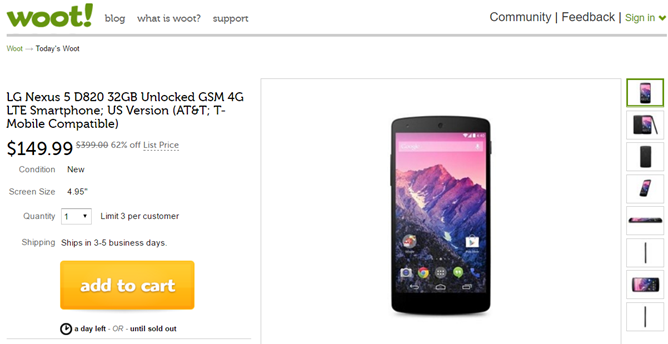 If you missed out on the N5 the first time around, or you just need a good backup or travel device, Woot has brand new units on sale today (and today only) for just $149.99. Heaven knows where they found new stock of a three-year-old device, and a popular one too, but they have it. It's only the 32GB model, which originally sold for $399.99, and only the black model is available. This is Woot's featured deal for today, so it will expire at midnight Central time and shipping is a flat $5. Since the phone is new, it should be covered under the usual one year warranty from your date of purchase.

Just in case you've forgotten, the Nexus 5 uses a 4.95-inch, 1080p LCD screen, a Snapdragon 800 processor, 2GB of RAM, and a 2300mAh battery. There is no MicroSD card slot. The camera is 8MP with an LG-designed optical image stabilization system. The plastic build isn't the most solid thing in the world, but the soft-touch body feels good and it's one of the lightest phones in its size class. The radio will work with a Micro-SIM from AT&T, T-Mobile, or Sprint (though you may need some help getting it activated on Sprint's network). It will also work with most international GSM carriers, though LTE support may be less reliable.

Get an order in quickly if you want a new Nexus 5 - there's no telling how many, or more likely how few, Woot has in stock.