Sometimes app developers surprise us with a big push of new versions and features after leaving us in the cold for the longest time. The Vimeo team, for example, had an ugly mess of an app for years until an update to version 2.0 last December completely rewrote it from scratch and made it several folds better. That was followed by the addition of Chromecast support in version 2.1 in February, and now another update to 2.2 is introducing offline videos.

When you start watching any video inside the Vimeo app, you'll see a new download icon in the overlay on top, which slowly breathes a blue hue to attract your eyes. Tap it and the video will start downloading and a notification will show up with the detailed progress. This works regardless of whether or not you're signed into Vimeo, so unlike Watch later videos, you can save offline videos without an account on the site. 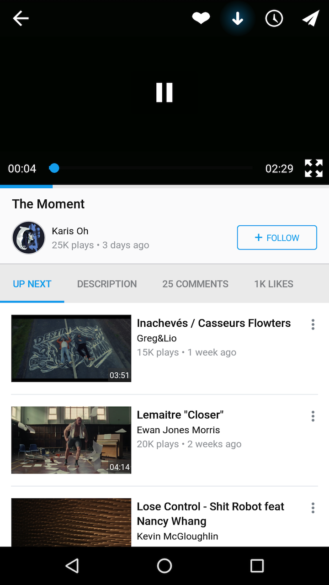 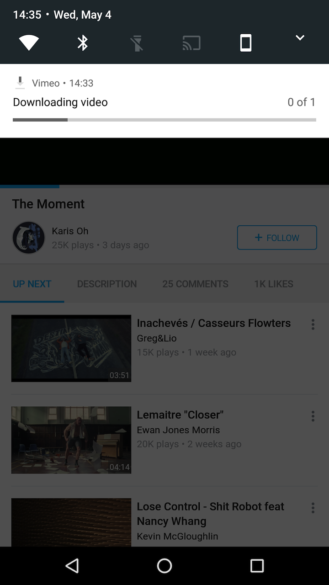 The Watch later tab (the middle one) now displays two sub-sections: Available offline and Watch later. The first one is where your cached videos will reside until you watch and delete them.

Here's the app's changelog, followed by a link to the Play Store so you can try it out for yourself.

Watch videos, sans WiFi: now you can save videos to your phone or tablet and watch them offline, anytime. No internet or 4G necessary.
When you’re not busy bookmarking videos for later, you may notice a few bug fixes and optimizations that make your uploading, streaming, and sharing as smooth as the screen on your phone before you dropped it one million times. (Guilty.) 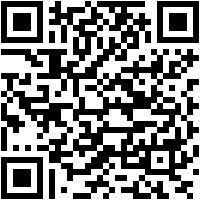