We're going off a single source here, so grains of salt and all that, but it looks like Facebook has finally begun to push the new Facebook Live tab to some Android users, a month after announcing it. The image below is from Romanian blog daytrend.ro, and clearly shows the same UI we saw in Facebook's initial announcement in April. 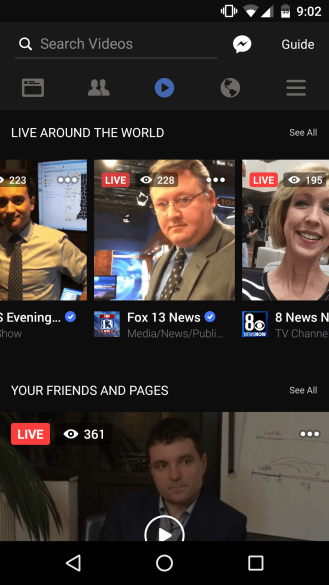 The blog states that they're using the current v77 alpha of the Facebook app, though using that same version I was unable to replicate the above. More likely, this is a server-side switch being thrown by Facebook for select users as they test the feature in the wild. When Facebook announced the Live tab feature for mobile devices initially, it was asterisked with an "in the weeks to come," so a month post-announcement isn't particularly hard to believe as a launching point.

In addition, it appears a new version of the Facebook Beta for Android is rolling out right now that adds back the colored status bar - the alpha version already has this - which was removed from the app shortly after being added around 9 months ago.

Are you seeing the Live tab in your Facebook app on Android? Let us know in the comments below.

Updated May Platform Distribution Numbers Show Marshmallow As The Only Version Gaining, Now At 7.5%