Right now mega-publisher 2K is in full promotion mode trying to get people to play Battleborn. It's a brand new shooter from (at least some of) the makers of the hugely popular Borderlands, and it attempts to blend conventional pew-pew gameplay with the variety and marketability of the MOBA genre. As part of this push the company has published Battleborn Tap, a mobile game that is neither a MOBA nor a shooter. Instead, it's underwhelming.

In this 2D game, a bunch of alien enemies appear onscreen and you tap them to death. Your tapping damage soon becomes insufficient, so then you'll have to win the battle the American way, by buying it. Specifically buying the "Battleborn" mercenaries, who are represented as cutesy 2D versions of the player-characters from the full game. Let your mercenaries shoot on their own, tap the bad guys to help them out, and grab currency to buy more soldiers or upgrade their equipment. At a glance it looks like an old-school RPG battle that happens to be playing out in real time, but in practice it's more like a complex version of Cookie Clicker. 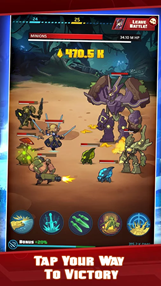 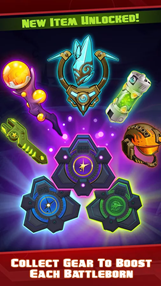 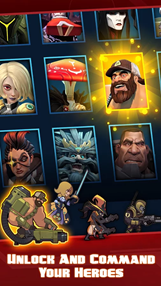 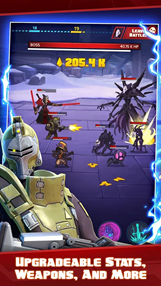 Everything's subjective of course, but I don't find Battleborn Tap to be a good representation of the full game or an engaging mobile title in its own right. It doesn't help that in-app purchases go up to $40, which is pretty bad form for a mobile tie-in that's ostensibly just there to get you excited for the PC and console version. Fans of the main game might want to check out some of the exclusive extras that can be unlocked in Tap, but it might not be worth the time spent even then.