BlackBerry launched the Priv late last year at the stratospheric price of $700. It's not an unheard of price for a flagship phone, but the first Android phone from a struggling OEM? Maybe not the best idea. The Priv has been showing up on mega-discount lately, and today it's on sale for the lowest price yet. You can pick a new unlocked Priv up from eBay for $379.99. 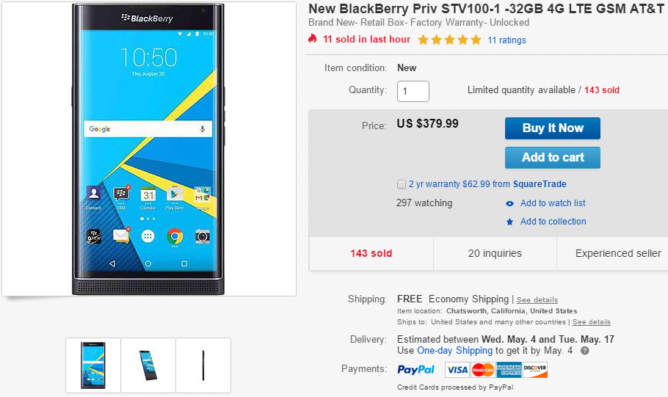 This listing is for the AT&T variant of the phone, but it's unlocked. It has all the LTE bands you could need (including B12 for T-Mobile), but the 3G bands are best suited for AT&T and similar carriers. It will work on any GSM/LTE network, though. Other than being unlocked, this is the same phone you can buy right now from AT&T for $640. It's really your only option if you want a modern Android phone with a keyboard.

As usual, economy shipping is free in the US. The seller will ship to a few other countries if you want, but it'll cost you. Tax is required only in California.