Developers usually use version numbers to convey the amount of change an app has gone through from one release to the next. But what does it mean when Google Maps not only jumps over v9.24 entirely, but also skips forward a patch release to give us v9.25.1? Let's assume it's a sign that there are a lot of new features and not too many bugs. This version certainly doesn't disappoint on new features. There are a bunch of additions to be seen, so let's get right into it.

Unofficial Changelog: (there may be more)

Contacts Appear in Your Places and Maps 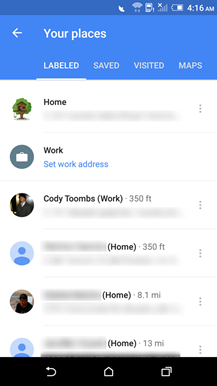 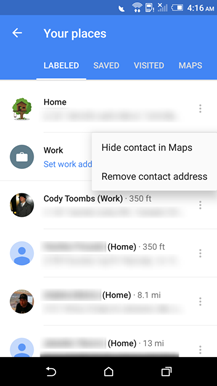 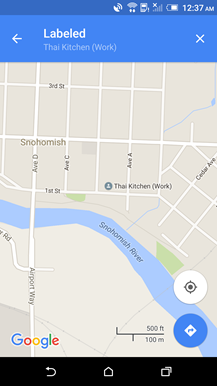 One of the biggest complaints about using Google Maps for navigation to a friend's house is that the address had to be manually saved or searched; otherwise, the only way to pull it up was through a contacts app. Forget those days because all of your friends' addresses are now listed under the LABELED page on the Your places screen.

Previously, this list contained standard entries for Home and Work, plus any locations with manually added labels. Those items are now followed by a list of addresses pulled from the contacts database. There doesn't appear to be any fast way to sift through them, so there are probably going to be a few more changes to this screen in future releases.

Each entry has an overflow menu with the option to hide the contact from Maps so it won't show up in this list or anywhere else in Maps, and another to remove the address from the contact entirely.

The contacts will also appear as landmarks while looking at maps. You'll have to be zoomed in reasonably close to see them, but they appear like any small business.

Tip: if you update to this version and don't see contact addresses, try killing and restarting Maps. 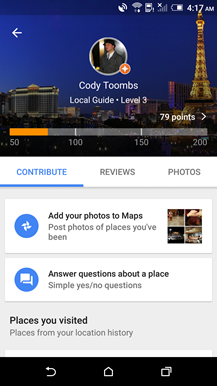 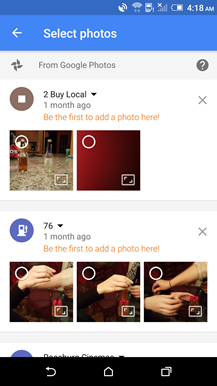 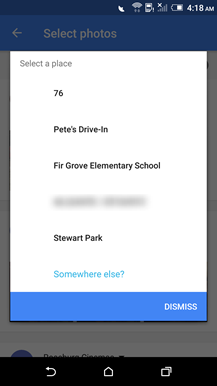 Another addition has been made to the Contribute screen, again putting focus on submitting photos for others to see. But this isn't just a little reminder or helpful hint, it's basically the grand poobah of batch submissions. Google is making it easy for people to snap dozens, or even hundreds of pictures for local establishments and submit them en masse.

Just look for the new "Add your photos to Maps" card on the Contribute page. This leads to a screen with photos taken recently. The whole list loads automatically in multi-select mode and photos are grouped based on location. Suggestions for the associated business are given, but they can be changed using a dialog with a list of other nearby establishments. Captions can also be added to photos once they've been selected.

Notification For 'New on Maps' 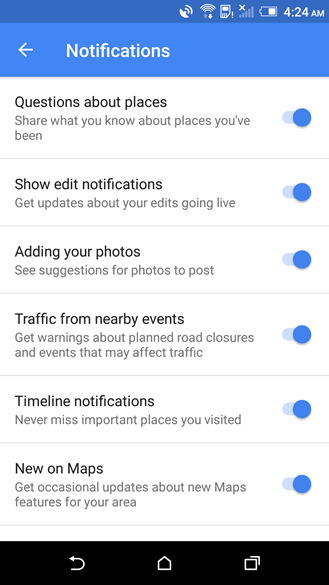 There is a new toggle under Settings –> Notifications that will inform users about "new Maps features for your area." It's not clearly spelled out (and it's even a bit overly vague), but this will probably produce notifications for things like new mass transit stations, major changes to roads and freeways, and other important events related to the things surrounding you. The option is on by default. 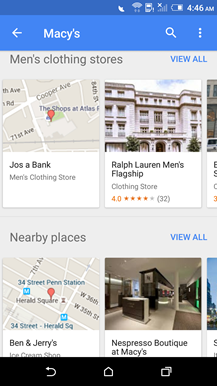 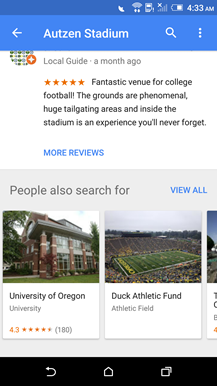 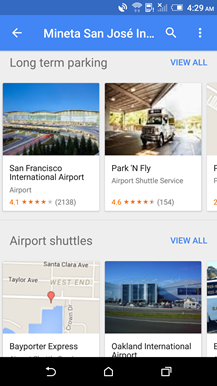 Google Now has made some big waves thanks to its predictive skills. There's a lot of value in having useful information within a tap or two. The latest version of Maps takes this a step further by adding related searches and suggestions to the bottom of location pages. Check out just about any business or landmark, you'll find lists of potentially useful information about places close to it.

Just about every location will have a "People also search for" list, but places like airports and popular shopping locations may include even more options. For example, an airport might include suggestions for long-term parking and transportation, and a store or hotel might show nearby shopping and restaurants, or even popular tourist attractions.