Fenix is my go-to Android Twitter client, and since I'm grandfathered in on my user token, I'll be sticking with it until the lack of support eventually tears the app asunder. But if you're looking for a new client with a lot of the same features and a similar feel, I'd recommend checking out Finch. It's been available for a couple of weeks, and it hits a lot of the same notes: Material Design interface, easy access to your main timeline, messages, and lists, light and dark modes, et cetera. As someone who ruined his eyesight long ago, I especially appreciate the setup that walks you through the theme and text size settings before getting to the tweets proper. The only thing I really don't like is that links open up in the app instead of the browser, and I don't see an option to change that behavior. 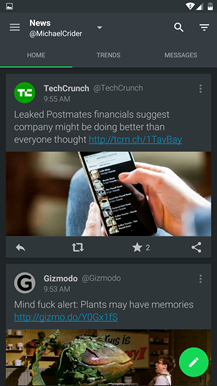 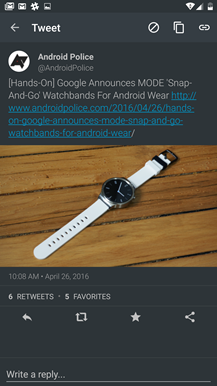 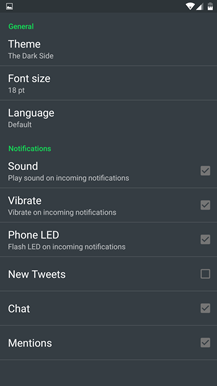 There's easy support for multiple profiles (if you spend an inordinate amount of time tweeting from the perspective of your Bichon Frise, for example), and the interface scales well from tiny phones to huge tablets. The one thing it's really missing is a big fancy scrolling widget, but since it has extensive options for notifications, at least some of that is negated.

Finch is free, which is nice, but also means that it's going to hit Twitter's arbitrary, anti-user, stupid, stupid, stupid token limit sooner rather than later. So download it while you can.