According to reddit user /u/TheWiseYoda, there is a setting in Chrome OS v51 (which is currently available through the developer channel) which says "Enable Android Apps to run on your Chromebook." In and of itself, that's not really saying anything - Android apps have been on Chrome OS for a while. This option quickly disappeared, meaning /u/TheWiseYoda could not tick it to see what happened. 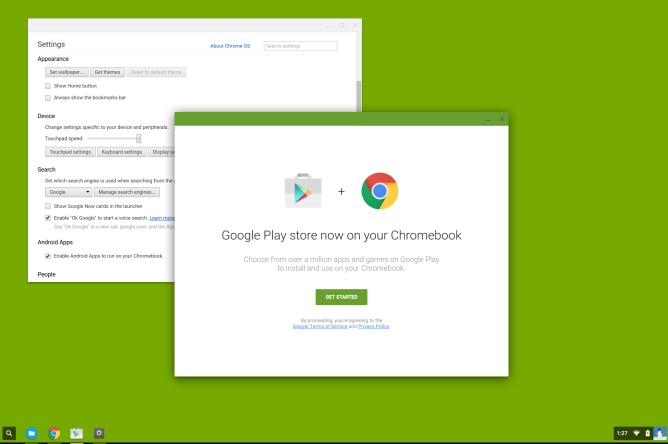 Above: the Google Play store window on Chrome OS, with the settings showing the enabled checkbox in the background

However, others had better luck and were able to enable the setting. They found that it brings up a window with "Google Play store now on your Chromebook." It also says users can choose from "over a million apps to install and use on your Chromebook." Like the earlier checkbox, this window automatically closes pretty quickly, but the information is there for all to see.

Pretty cool, huh? Could this be the big Google I/O news this year? We'll have to wait and see, but it certainly looks promising.

[Weekend Poll] What Is Your Ideal Smartphone Screen Size?