So often we are asked to either buy a "mainstream" Android smartphone or wait for the separate "phablet" launches of devices that often occur later in the year. There's no big HTC 10 or LG G5 - those are one-size-fits-all devices. Samsung launched the S7 and S7 edge in two sizes: one the 5" (roughly) smartphone that embodies the typical flagship device of the last two years. But they also launched the 5.5" S7 edge with a curved display panel for those who wanted a bigger screen and battery. The battery gets a 600mAh boost to a total capacity of 3600mAh, and that definitely makes a difference in my experience. 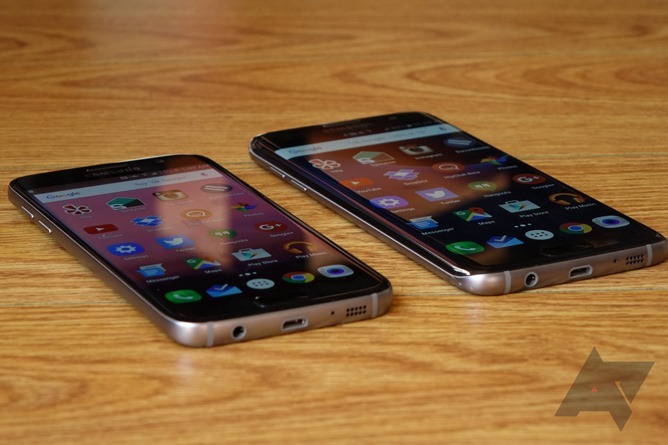 Samsung may have taken a bit of flak for following the "Apple formula" of iPhone / iPhone Plus, but Apple basically took that formula from other, smaller manufacturers who have been doing similar size-staggered smartphone launches for years.

For those who loved the Galaxy Note line but never really used the stylus, the S7 edge provides the large screen real estate of that device without the wait. The Note doesn't usually launch until many months after the Galaxy S flagship, so if you want a big-screen, premium Samsung device, 2016 is the first year Samsung is giving you an option quite so early. The S7 edge is definitely my favorite of the two, for its larger - and more striking - display, and superior battery life.

I don't use it often, but I'm glad to have it when I do. Samsung Pay is the only mobile payment solution that can truly replace your credit card in a majority of situations. While not suited for every payment requiring a credit card, here in the US, Samsung Pay basically works anywhere you can non-awkwardly reach for the magstripe reader on the point-of-sale machine. 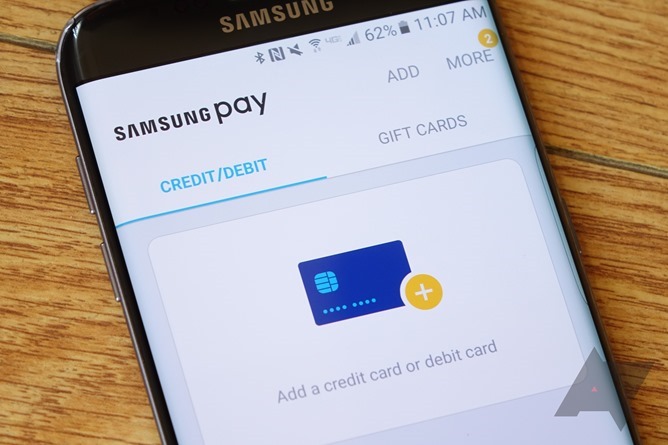 Your bank does have to support it, but major credit card issuers are generally well-represented on Samsung Pay in the US, and it really is crazy simple to use. You can actually set up Samsung Pay to sit on your homescreen or lockscreen at all times, reach to launch at a moment's notice, just by pulling up from the bottom of the screen. You then can use your S7 or S7 edge's built-in fingerprint scanner to authenticate use of the card and activate "payment mode," at which point you simply hold the phone against the credit card reader where the magstripe scanner sits.

Samsung Pay will also work with Android Pay and Apple Pay-enabled NFC readers if the magstripe doesn't work, or if you prefer to pay using NFC. You're getting the best of both worlds here - Samsung Pay really is a pretty awesome feature. Samsung also wants to grow Pay to be used for storing membership cards and loyalty points, and given the feature's very warm reception, I wouldn't be surprised if they start to make headway there.

You can find the full list of supported Samsung Pay banks and card issuers for the US here.

Samsung makes the best display panels in the smartphone business, full stop. Samsung's Super AMOLED panels have the deepest blacks (great for watching TV/movies and gaming), great outdoor visibility, the best color reproduction (in "basic" mode - more on that in a second), and insanely good viewing angles. Issues around Super AMOLED power consumption have largely been resolved, as the S7 and S7 edge have easily boasted the best battery life among flagship smartphones this year. And like any modern high-end smartphone, they offer 2K resolution. 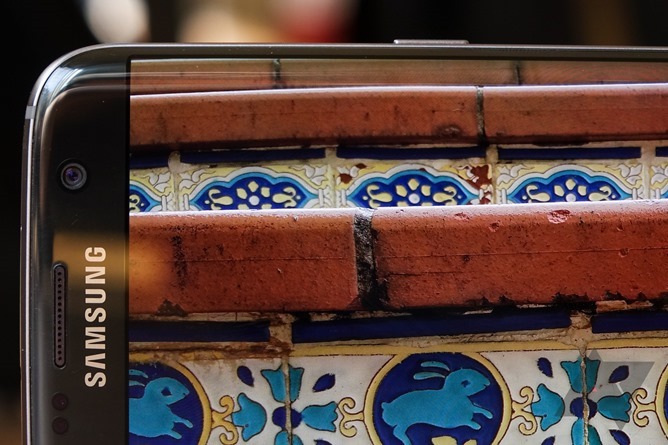 What makes Samsung's screens great in particular for photography is that they can be set to an extremely accurate "basic" mode in the settings. If you open the settings apps, under display there is a section called "screen mode," which offers you four options: basic, AMOLED photo, AMOLED cinema, and adaptive display.

Adaptive display is the default mode, and it will boost or lower contrast in certain applications versus others. For example, in the camera app, it will heavily boost contrast and brightness so that the camera viewfinder is easier to see in bright sunlight. This mode is probably the most desirable mode for most people, as it makes colors extremely vivid, increases effective contrast (making the display easier to see in bright conditions), and provides the most striking images. 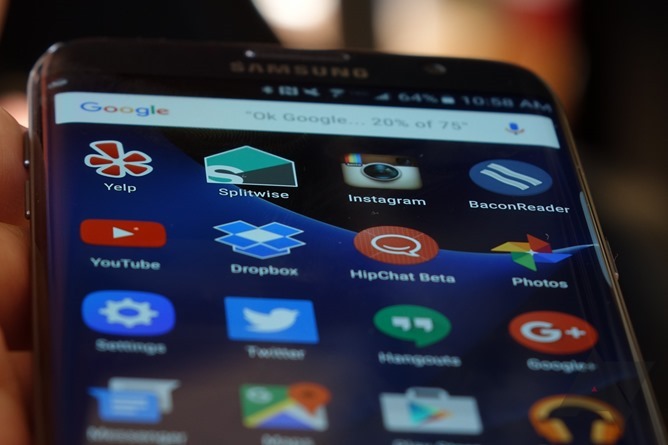 But if you switch into basic mode, the panel becomes extremely "accurate." This means that photos, video, and other content all appear very close to their "real" colors, as opposed to an interpretation of those colors that Samsung's software thinks is most visually pleasing. This can be great for reviewing photos or video your smartphone camera has taken, because you can get a much better sense of how that photo or video will look on your PC, other people's smartphones, and televisions, as opposed to just how it looks on your own phone's screen with its particular color calibration. I also personally find the warmer whites of the basic display mode are much easier on my eyes when using the phone at night or in the dark, whereas the adaptive mode tends to be a bit more uncomfortable because the white point is bluer. It's great having these options.

The camera is very, very fast

Samsung's camera on the S7 and S7 edge starts up fast and takes pictures even faster - this is probably the fastest smartphone camera out there right now. And while it may not have the fastest startup time of any smartphone camera ever, the speed with which it captures images is hard to beat. Many smartphones today make aggressive use of HDR features that enhance the contrast and dynamic range of the photos we take, especially when lighting is very dark or very bright (or both) in a scene. These HDR modes are great for turning what might otherwise be washed-out or murky images into vivid, beautiful photos. But they usually come at the cost of time - the Nexus 6P, for example, takes quite a while to do an HDR capture, and this can slow you down when taking subsequent photos. 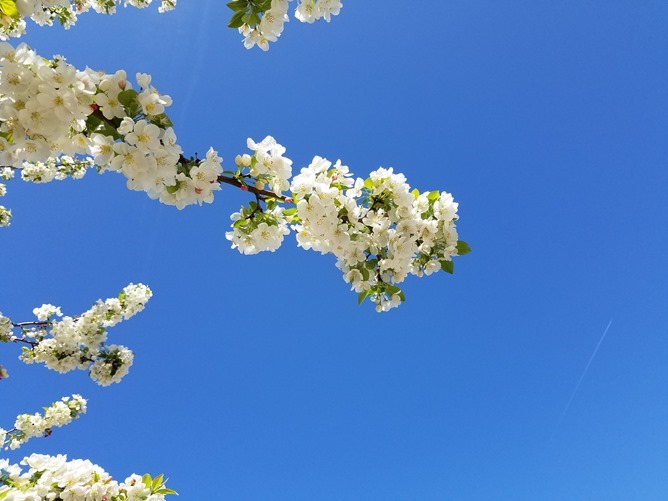 The Galaxy S7 and S7 edge capture HDR photos extremely quickly, thanks to what is likely the same hardware HDR processing Samsung used in the Galaxy S6 and S6 edge (and Note 5 / S6 edge+) last year. Combined with a lens and sensor that are designed to pick up even more light in the dark, the S7 and S7 edge are easily the most usable smartphone cameras I've ever come across.

The Galaxy S7 and S7 edge can manage to get a decent image in almost any lighting condition, and the speed with which images are captured means less blur, fewer missed moments, and a less frustrating smartphone camera experience overall. 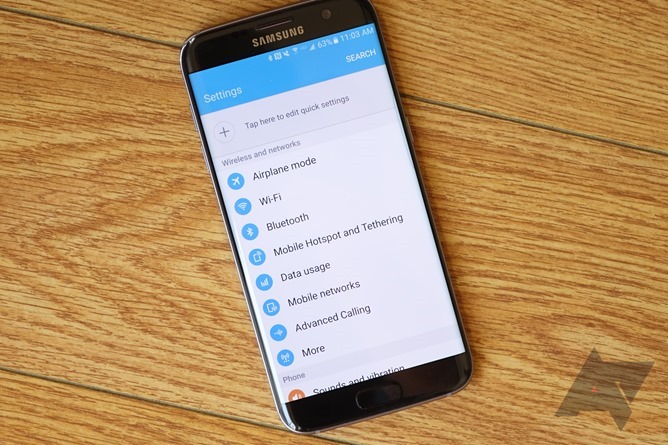 The reason I point this out is a difference in battery life. Sadly, our US versions of the S7 and S7 edge don't get the insane battery life of the international Exynos versions of the phones. But here's the thing: the battery life the US versions do get is still really, really good. My AT&T S7 edge easily gets over five hours, sometimes six, of screen-on time (go to settings -> battery, scroll down, then tap "screen" on the list to see your screen on figure). That's completely nuts compared to the S6 or S6 edge+, both of which barely managed to get me to three hours, maybe four tops, last year. My Nexus 6P gets nowhere close to the S7 edge's figure.

The regular S7 easily gets over four hours of screen on time for me, too, which for a phone of its size is quite good. If you are lucky enough to be in a region with the Exynos versions, some users of the Exynos S7 edge are reporting seven or eight hours of screen-on time in some conditions. That's totally bonkers.

But even with our Snapdragon 820 versions here in America, the battery life improvements over last year's Galaxy phones are huge, and Samsung seems to be leading the pack on this figure overall coming into 2016.

What do you love about the Galaxy S7 and S7 edge? Discuss in the comments below. Be on the lookout for our counterpoint post, too, in which I discuss the things I don't love so much about these phones.