It has only been a couple of weeks since WhatsApp made end-to-end encryption more visible and easily verifiable to all its users, and now Viber is following up in its footsteps.

The app, which messages seem to have been encrypted before (but not exactly end-to-end, apparently) will now show a padlock in conversations to confirm that your personal and group messages are end-to-end encrypted. All users need to have Viber 6.0 installed for the feature to work and the padlock to show up, which means that you'll probably need to wait a day or two before everyone's app updates on Android and iOS. 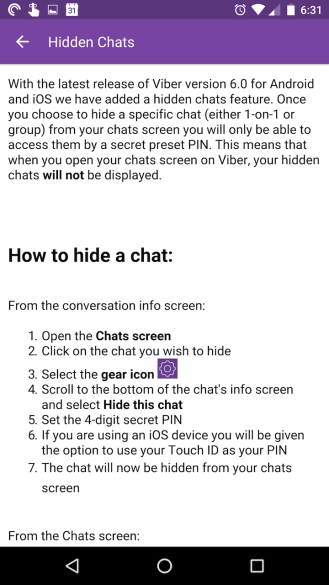 There is also a new option to hide chats from the main chat list (because, uhm, reasons?!) and to authenticate contacts you're talking to. Here's the full changelog followed by the link to the app on the Play Store.

Viber's new privacy-enhanced version includes:
• Increased security – the padlock icon confirms that all your messages – including groups and cross platform messages – are end-to-end encrypted
• Hidden Chats – hide away specific chats so nobody knows they even exist
• Contact authentication – a new layer of security allows you to protect yourself further with a simple ‘trust contact’ mechanic