The Powerhouse is a lithium-ion power bank with enormous capacity. What kind of capacity are we talking? Well, there are 36 individual batteries in the Powerhouse and each one is rated at 3,350mAh. That adds up to a total capacity of 120,600mAh, or 434Wh. Holy guacamole, that's a lot of energy. In fact, it's enough juice to fully charge your phone up to 40 times, juice up a laptop up to 15 times, power a 15V lamp for over 100 hours, or even run a mini-fridge for 7+ hours.

The batteries are housed in a very handsome aluminum casing with a sturdy aluminum handle. The whole kit is slightly smaller than a car battery and weighs in at 9.7lbs. On its face, the Powerhouse sports four 2.4A USB ports, one 12V car charger socket, a 110v standard AC plug, and a 16.8v power input connection. It can be recharged in 10 hours using the included charger, or in 16 hours with a compatible solar charger (which has yet to be released). The LCD panel on the front indicates which ports are turned on and gives an estimate of charge time remaining based on the current output.

I know what you are asking yourselves about now – why would you ever need a portable battery with that kind of capacity? Anker doesn't see the Powerhouse as a massive phone charger, they consider it as a replacement of a small gas-powered generator. With that in mind, the uses are numerous. Camping, road trips, power outages, a stay at grandma's house (that was built in the 1920's and has only 4 power outlets in the whole building), or the zombie apocalypse; you name the activity, the Powerhouse can be your energy source for it.

How Well It Works 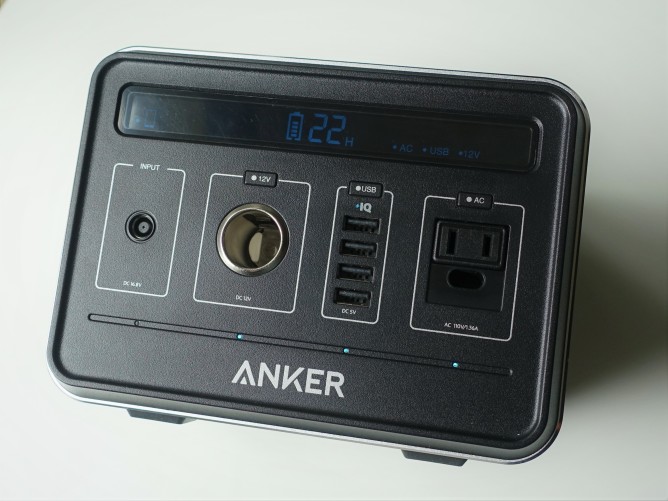 I'm very impressed with this device. It is extremely well-built, functions just as advertised, and is quite good-looking on top of all that. It worked to recharge every phone and tablet I threw at it, in addition to a lot of the smaller electronic items in my home. While the USB ports are not QC compatible, they still delivered a fairly quick charge to my wife's Sony Z3. Besides, if I wanted a faster charge I only needed to plug in a QC car charger into the 12V outlet and I'd be in business.

I had a lot of fun trying the Powerhouse out with a variety of household electronics. It did just fine powering a small stereo, my bedside lamp, and even my 50 inch Sony TV. Higher voltage appliances, like our toaster and blender, or my wife's blow dryer (she was hoping to be able to use it while camping) were too much for the little guy. They would work initially, and then, as the power required increased, the Powerhouse would shut off with a beep. That brings up a good point, the Powerhouse has voltage and temperature safety controls as well as built-in surge protection to prevent your power bank from turning into a bomb. That's good.

I would love to tell you that I tested Anker's claims that the Powerhouse is capable of recharging a phone 40 times, but there is no freaking way that I was going to be able to verify that in just a week (even if I wanted to). I will tell you this though, I've used it for several hours the past week to power a whole bunch of different items and I still haven't completely drained the thing yet. This thing is an absolute beast. 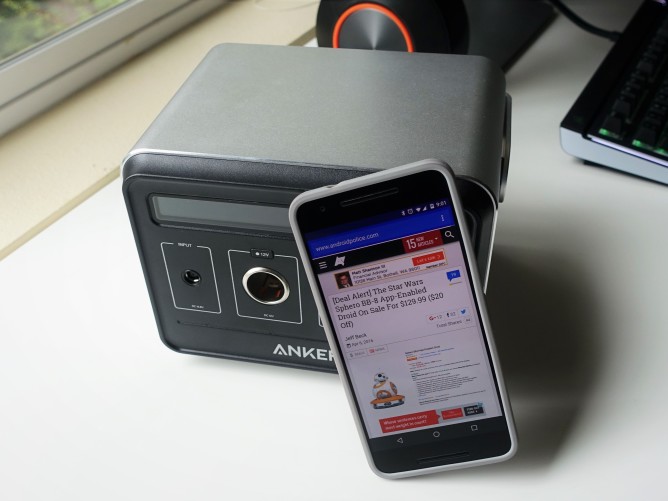 There are a couple minor nitpicks I have with the device. The first small annoyance I have with the battery is that there is no auto-off feature. Each connection has to be powered on individually by hitting the button just above it, and once you turn it on, it will remain on until you turn it back off – even if nothing is connected to it. Since this battery is intended for use while camping, or in the car, I can see those buttons getting hit accidentally. I don't know how much power is drained by keeping a port active, but it would be nice if the battery was smart enough to turn itself off when not being used.

The other minor quibble is that there is no bag or case included to protect the Powerhouse. The aluminum body, while handsome, can be scratched and scuffed rather easily, and I would have liked to see a carry case included, especially for the price (which we'll get to in a moment).

The Powerhouse was just released today, and is now available for purchase at Amazon for $499. Yeah, that's a hefty chunk of change, but considering that one Powerhouse has the same amount of juice as 36 of Anker's $16 PowerCore+ mini chargers, the price is easier to understand. You also won't have to pay $499 for it because Anker has provided us with a 20% off coupon code to share with you, our power hungry readers. The code is ANKPower and can be applied at checkout to reduce the price by $100 to $399.

The item is not eligible for Prime 2 day shipping, but it does include free standard shipping with delivery in 8-10 business days. Since it is not sold by Amazon you also won't have to pay sales tax (unless you live in California). The Powerhouse is backed by an 18 month warranty. Interested? Check out the product listing by clicking the link below.