At this point asking people to support your crowd-funded concept device is kind of like asking them to support your "sure-fire multi-level marketing system." Sure, it could be legitimate, but it's better to just treat that money as if it's gone forever. That said, smartwatches might be the one exception. Pebble, arguably the legitimate dark horse in that small market and one of the first to successfully market itself, got started on Kickstarter. So maybe it wouldn't be fair to dismiss the CoWatch, a new smartwatch that features interoperability with Amazon's Alexa voice control system, out of hand.

Based on its Indiegogo campaign page, the CoWatch is a fairly straightforward smartwatch design. It supports fitness tracking functions, notifications and canned responses, interchangeable watch faces, a heart monitor, et cetera. The hardware even appears to be similar to Android Wear devices (if that 1.2GHz processor isn't a Snapdragon 400, I'll eat my hat). The software is custom, but it's reportedly compatible with both Android and iOS, and the watch's screen is a full 360-degree circle with a 400x400 resolution. But none of those are headlining features. The notable difference between the CoWatch and any Wear device you'd care to name is that it uses Amazon's Alexa system for voice control and management.

Alexa, you'll recall, is Amazon's take on voice control services like Google Now and Siri, currently doing duty as the highlight feature of the Amazon Echo gadget. The API integration in the CoWatch allows the smartwatch to do more or less all of the same things, assuming it has an active Internet connection available. That includes basic voice searches, controlling compatible apps, and even activating "smart home" features. 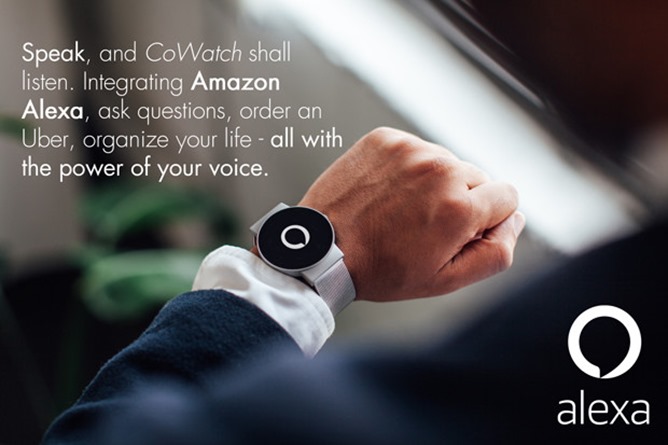 CoWatch claims to be built by "Android and Google veterans," but the only former Google employee on the eight-person team is a sales manager. The rest are a mix of product managers, hardware and software engineers and the like, none of whom are particularly notable. That said, they have put their names on the project, which is more than you can say for many Indiegogo campaigns.

Normally "flex-funded Indiegogo hardware project" is just Internet slang for a group of gullible and ultimately disappointed people giving their money away. But the CoWatch campaign seems legitimate, if only because it's not really a campaign. The $80,000 flexible goal is laughably low for this grade of hardware, and with initial units already in production and a full rollout scheduled for June, it's clear that the design of the smartwatch is more or less done. Nope, this is a marketing push, pure and simple. That said, they are offering some pretty sweet deals, including a $159 entry price for the "super early riser" tier. If you're already invested in Alexa as a platform, and you don't mind a moderate roll of the dice, then lay your money down.