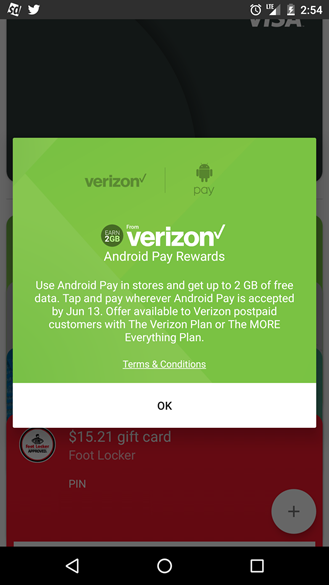 To demonstrate its commitment to the Android Pay platform, Verizon is doing something almost unprecedented at Big Red: giving away data. Customers who activate Android Pay on a compatible Verizon phone will be rewarded with one extra gigabyte of data access. Use Android Pay at least three times, no matter what the cost of the actual transactions, and you’ll get 2GB of free data. The offer is good for post-paid Verizon customers on the standard or More Everything plans.

The wording on the terms and conditions page is a little vague and filled with legalese, but apparently participants need to make their purchases by the end of the day on June 13th to qualify… and the data “may be redeemed” until July 13th. So yeah, that sounds like participating Verizon customers get bonus data for a grand total of three months. Oh well – that’s still pretty nice considering how expensive Verizon’s data is in the first place.