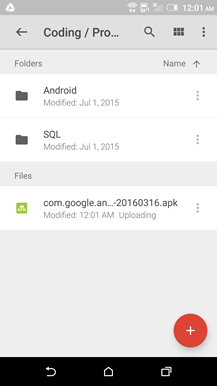 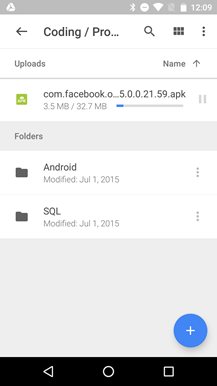 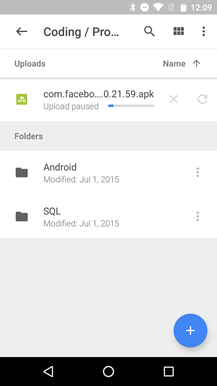 Yesterday, we discussed the desktop client and how it finally allows for selectively synced subfolders, but now it's time to look at the Android app, which also received a bit of attention. The experience of uploading a file just got a little bit better. If you're sending a file to the cloud from your device, there is now an inline progress bar for uploads.

The previous version placed an item at the bottom of the file list, but it lacked feedback about its upload status. (There was a persistent notification during the upload, and that did have a progress bar.) With v2.4, Drive now shows a progress bar during the upload progress, along with a pause button at the far right. 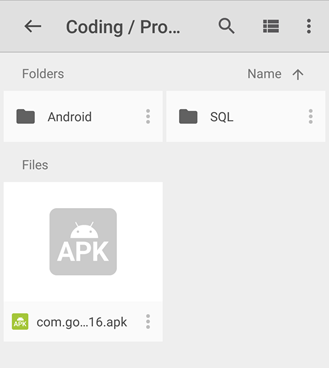 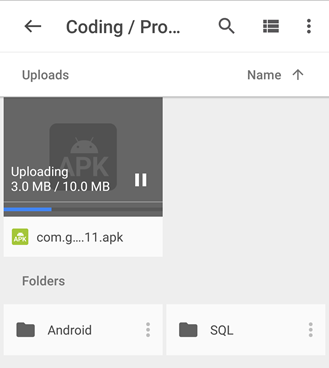 For reference, here's what it looks like in grid view. 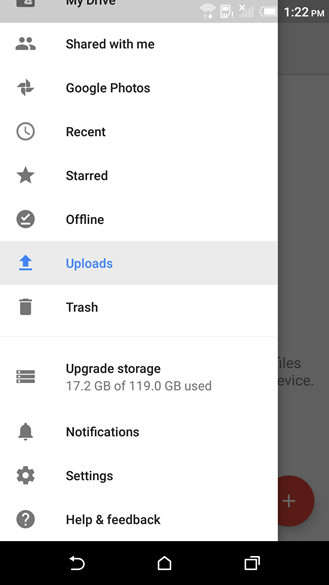 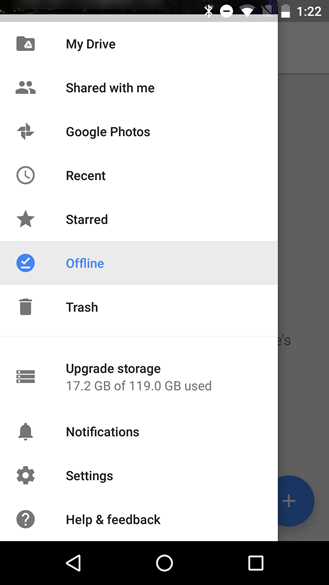 It's worth noting that there is one victim to this change. The Uploads screen that was present in the navigation drawer has been removed. This means there's no immediately clear way to see all of your current uploads in one place, but there are still notifications to show uploads in progress. 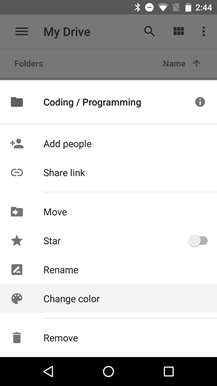 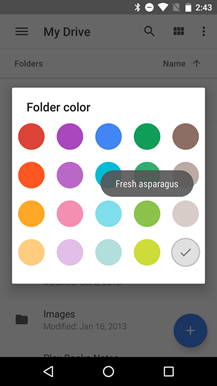 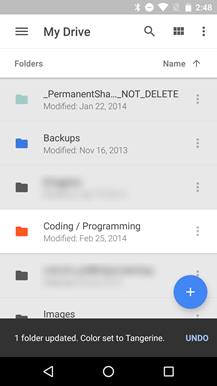 Google Drive has found its colorful side, or at least it's allowing us to. Folders can now be given custom colors. This will allow for users to work in a color-coding system for their files, or even just make certain folders easier to pick out at a glance.

To change the color of a folder, just tap the overflow button and look for the "Change color" option near the bottom of the list. Choose the color for your folder (or optionally long-press on the colors to see some of their unusual names) and the folder will switch to the new color. A snackbar with the color name and an undo button appears after making the selection, remaining there until some activity is taken. 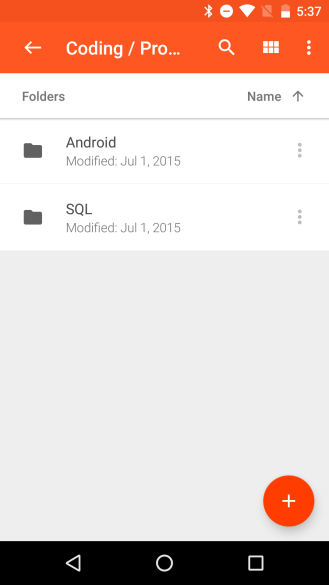 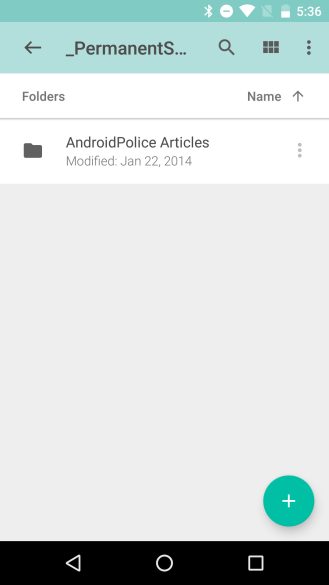 Correction: The FAB, Action Bar, and Status Bar will now change color to match the folder color (as described in the previous section). However, if a color has not been set, the default color for the FAB alone is blue. - Thanks, Lucas C.

The small screen of a phone, or even a tablet, isn't really the best interface for file management. At the very least, it's not great when the list of files gets up into several pages, and it's even worse when folder structures get fairly deep. Drive is looking to remedy this with an increasingly common solution: a built-in suggestion engine.

As one of the strings points out, suggestions can be swiped away to dismiss them, which means they will probably appear as cards at the top of the root view. Swiping them away will include a snackbar element with the option to Undo the dismissal.

It looks like the feature may have a couple of different facets. There titles are given: Assistant, Items you may want now, and Smart items. There's a connotation that different situations call for a different type of recommendation.

This gets more interesting because it appears Drive will explain the reasons for each suggestion, and the list is fairly extensive. This can include files that were accessed recently or with a high frequency, those that have just received comments from other people, documents with related comments, or even files that seem to be accessed at the same time each day.

The basic premise here is that Drive is going to make some educated guesses at which files a user is likely to need at a given time, then put them within quick reach when the app launches. If this saves even one instance of digging through a few layers of folders, it's worth having. This may not be of much value to users with a dozen or so documents laying around, but it could make a profound difference for those with a massive collection numbering in the thousands.

The subject of suggestions isn't quite over, Drive is also going to steer us toward saving files for offline use when opportunities arise. It looks like this will be a prompt that appears when we lack an Internet connection and try to open a file that's not stored locally. The message will be titled "Planning to edit this file often?" and explain that the file is currently not available offline, and then recommends pinning it for the future.

It's not a big thing, but regular users will probably appreciate the reminder. More importantly, this will also serve to educate new or inexperienced users that files can be saved for offline use.

I'm reluctant to cover this one because it stinks of unfulfilled promises, but the text is here so I'll mention it. Yes, it looks like Google is going to take a pass at a manual full-device backup.

What does it mean to back up a device? Well, that's the mystery... This could be a hook into the Marshmallow feature that enables the backup and restoration of app data to Google's servers. Alternatively, this could be a way to back up all of the publicly available files in local storage. I'm almost dead certain it's not going to resemble anything like a fully restorable nandroid backup, but that's not completely off the table.

As these new strings open up room for speculation, there is also a chance that they belong to a basic reimplementation of the existing backup features, which would make them entirely uninteresting. Basically, I'm saying it's not worth getting any hopes up... This could be something, but it's probably nothing.

Do you actively collaborate with anybody using Google Drive? Good news: there's going to be a shortcut in the nav drawer to "Team Drives." There's not really much else to say on this, but it's pretty obvious that this will be a quick way to reach those folders that everybody shares. The string appears among a handful of other names that were previously found in the nav drawer, which makes it pretty obvious this will be joining them.

That's it for this teardown. I'll be looking through plenty of Android N apks, so there may be more stuff to see this weekend. (Somebody please kidnap me and force me to take a break.)

[Update: Streaming Now] The Coachella Music Festival Is Streaming For Free This Weekend ...