Third-party retailers are a tempting source of information for upcoming product specifications. My theory on this is as follows: until historically recently, retail has been comprised largely of brick-and-mortar stores. In advance of major product launches and marketing initiatives, those stores often received information, media, and technical details about products weeks or even months ahead of time so as to be ready when said product became available. This is because things needed to be designed, printed, and distributed to physical locations in advance. This made retail leaks - such as weekly mailers or magazine advertisements - fairly reliable.

But in more recent years, the internet has largely obviated this system. An online-only retailer can receive marketing, promotional, and technical information about a product days before it launches and be fully prepared to sell it to customers. Let alone that in the world of notable smartphones all the relevant technical and product information (aside from price, sometimes) is typically made available weeks before the product physically ships to consumers, so online retailers don't really have any special interest or need for that information too far in advance, typically. That's not to say it never happens, it's just kind of rare. Generally, those providing reliable retail leaks anymore are either companies making the products themselves or the brick and mortar dinosaurs - stores that still largely operate in the real world (and thus need more advance notice to coordinate product launches).

Oppomart, a third-party retailer of various Chinese smartphones and accessories, is neither of these things. Oppomart is an online store where you can buy Oppo, Xiaomi, Meizu, OnePlus, and various other brands of popular Chinese smartphones. It is not affiliated with Oppo in any way - that's just what they call the store. Oppomart, being a self-interested bussiness, is very interested in getting you to click on things and then subsequently buy stuff from them. Thus, this completely bogus listing for a OnePlus 3 on their store. 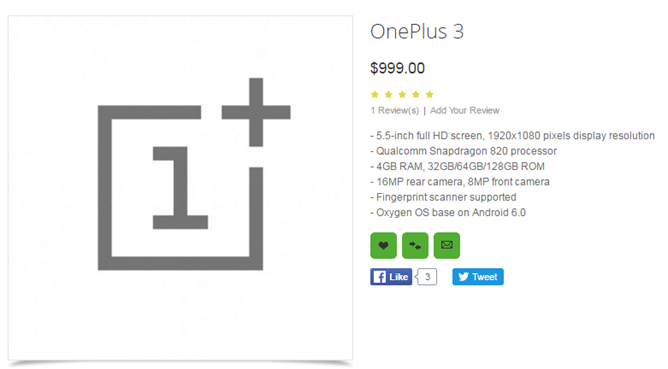 The specifications for which were almost certainly lifted from an Antutu score - the merits of such things already being wholly dubious - and what appears to be speculation from PhoneRadar (I see no real evidence the OnePlus 3 will have a 5.5" screen, aside from the previous two devices having them). Now, could it just be coincidence, and Oppomart just happened to put up the product page around the same time this leak occurred? I'd be inclined to consider that a possibility if Oppomart didn't have a history of shamelessly plugging completely wrong information into their product listings. Take this listing for the OnePlus 2 from an archived page, just a few weeks before the phone launched last year.

Now, compare to the actual product listing once Oppomart figured out what the real specifications were.

This leads me to my next point: it's supremely unlikely Oppomart gets specifications from any phone manufacturer before a phone is announced, because Oppomart is a gray market retailer. This means that Oppomart does not operate as an official distributor for at least some of the brands of phones it sells - and probably all of them. There is a huge demand for gray market devices from many of the brands it stocks in countries where these phones are not officially sold nor supported, or where these phones may take months longer to launch.

And while the makers of the phones Oppomart sells probably aren't terribly upset about an unofficial distributor getting their brand exposure in markets where they don't operate, it's easy enough to see by their prices alone that those brands have no real involvement with the company. Oppomart wants $569 US to pre-order a Xiaomi Mi 5 Pro, a phone that in China will retail for around $415 with tax. They charge $385 US for the OnePlus 2, which ordinarily sells for $349.

OnePlus, though, is among the least likely of all those manufacturers to give Oppomart any kind of heads-up, since OnePlus is the sole official retailer of OnePlus devices. I mean, really: what rationale would lead OnePlus to give specifications for an upcoming phone to some random third-party retailer they don't even work with? That'd be some awfully self-destructive behavior, and while I'm far from OnePlus' biggest fan, even I don't see any logical reason for them to go around giving controlled leaks to Oppomart, especially when they put a price placeholder of $999 there, which is openly misleading to anyone who might stumble upon the page.

So, just remember to be careful out there when you see a "leak" or specifications for any unannounced smartphone. There are plenty of companies that would be all too happy to put up a product page just to get you in their door and clicking around, hopefully to buy something. Oppomart is absolutely one of those companies, and the information they publish about upcoming smartphones shouldn't be taken with a grain of salt - it should be outright distrusted.

The T-Mobile Galaxy S6 And S6 Edge Are Getting Android 6.0.1 Marshmallow Today