Hi. It's not often I put on my "audiophile skeptic" hat here at Android Police, but, well, I felt compelled today. As you may be aware, LG has a phone called the G5. That phone has an accessory called the Hi-Fi DAC, which is a little black box with a B&O logo on it. I've used the B&O Hi-Fi DAC with our compatible pre-production G5 (this does not affect the "quality" of the DAC). It is, in short, exactly what I expected.

I was not necessarily expecting quite the... loving embrace that I've seen some critics give it. While the G5 itself has seen fairly mixed reviews, the Hi-Fi DAC seems to be getting a pass as the highly-desirable one of two chin modules LG has launched with its new smartphone. And I'm left wondering, for the most part, why?

First, let's discuss what the Hi-Fi DAC actually is. To call it a DAC alone is actually not a complete description - the LG Hi-Fi DAC is a DAC and a headphone amplifier, albeit one that requires power from an external source. It will work as a standalone audio device with PCs, too (that's actually fairly neat). So, let's break that down: what's a DAC? A DAC is a Digital to Analog Converter. It is an umbrella term for any device which converts a digital signal (to oversimplify, ones and zeroes transmitted as electricity) into an analog signal (to oversimplify, a continuous and time-variable electrical current). So, it takes the raw bitstream from your decoded MP3 or FLAC file (see: ones and zeroes), then converts that bitstream into an analog signal (something you can put into an amplifier and hear).

The "amplifier" portion is a bit trickier as I'm not an electrical engineer, but what you need to know, in essence, is that the amplifier takes the analog signal and amplifies it such that it is actually audible (unamplified signal would be far too quiet) to whatever your end playback device is, be it headphones or speaker. And yes: you can have a DAC without an amplifier built into it, and you can have an amplifier without a DAC. But in the audio world, pretty much any portable DAC has a built-in amplifier because you wouldn't want to carry around two separate pieces of equipment, it'd be silly.

So, with those basic understandings out of the way, what does LG's Hi-Fi DAC actually do that makes it interesting?

Functionally, those are the tick marks. I know - there's more about the amp and DAC themselves, and we'll get there.

Let's talk about the first one: the Hi-Fi as an external audio device. If you have a laptop, especially an older one, this could actually be useful. Cheaper laptops, especially, typically have poor quality headphone amplifiers, and this can result in noticeably inferior sound quality when using headphones. Plugging in the LG Hi-Fi DAC could, potentially, improve the quality of audio on your laptop. We aren't getting into the "why" of that just yet - but suffice it to say, even I, the audiophile skeptic, do see a potential use case there. 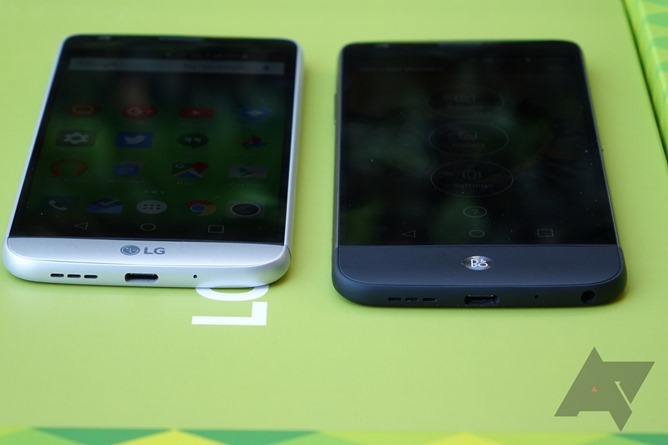 Granted, there are similar systems that cost a fraction of what LG's does with far more capability if you plan to use them with a laptop, and if you want to get spendy, there are dedicated products I would be far more likely to recommend that at least have the value of existing positive consumer feedback. LG's Hi-Fi DAC is a near-total unknown for this application and I would be wary of throwing my money at such a thing when existing gear gets the job done, and done cheaper.

The second one is what audiophiles are likely looking for: native support for playback of high-bit depth (e.g., 16, 24, 32-bit), high sampling rate (e.g., 44.1, 48, 96, 192KHz) audio files. If you are not familiar with these concepts, I suggest Wikipedia for a basic primer (bit depth, sampling rate). And if you are not familiar and don't want to get familiar, what you really need to know about ultra-high bit-depth and sample rate is that testing and analysis of these things generally shows that they are at best unnecessary and at worst actually destructive. There are counter-sources to these views, I know. But I'm the skeptic here, and I've never seen anything that has actively compelled to believe any of the hoopla around this stuff outside the context of actually recording and mastering audio, where the concerns are quite different.

Still, audio is increasingly becoming available and mastered in high bit-depth, high sample rate formats, and even streaming services like Tidal are starting to offer it this way. For audiophiles, having a piece of hardware that supports native decoding (without downscaling) of the bit depth and sampling rate of the files they listen to is paramount. There is actually no especially good reason for this - but I can understand the desire. If you had a phone that only played 2K video and all your video files were 4K, even if the screen was so small that you could not possibly tell the difference between 4K downsampled to 2K and native 4K, you'd probably still want the ability to play back in native 4K. It's slightly irrational, but it's something I think we can all understand on some level.

Now, let's talk about upsampling. The G5 Hi-Fi DAC takes any audio being played back and "upsamples" it to 32-bit/192KHz. So if you have a 16-bit, 44.1KHz or 48KHz track (the most common formats), it "upsamples" that to the higher bit depth and sampling, with the implication being that this makes things sound better. (Correction: This piece previously confused up-converting [which is objective bullshit] with upsampling, it has since been updated.) This is, at best, highly debatable. First: you cannot create data where no such data exists - and that's not even what this is trying to do. If the file is encoded with a sample rate of 44.1KHz, "upsampling" it to 192KHz cannot create information that the file never had. Period. And this implication, for me, is where the train really starts to derail with the Hi-Fi DAC, because LG has already lost my trust by peddling such a blatantly untrue implication designed to take advantage of placebo and people's willingness to believe that audio is too complicated to really understand.  Correction: In this context, upsampling may or may not produce an audible effect on the end music, but the actual result is still highly debated by audiophiles and science, and no one seems to understand fully if or why upsampling does (or does not) work or even if the effects it allegedly produces are desirable. At the end of the day, LG markets this feature like it "increases" the quality of your audio files to as though they were 32-bit / 192KHz, which is misleading (again, no new data where none existed before). Upsampling is an entirely different process, and one that may modernly have no real reason to exist.

Moving on, we'll confront the real elephant in the room: the notion that the LG Hi-Fi DAC makes your audio sound "better" than that from the built-in headphone jack. Does it? My position is that even if it did provide a noticeable improvement, LG has gone out of their way to hide it. Because they know that, even if the improvement is there, it is so marginal at best that most consumers would completely fail to notice it.

Instead, side-by-side listening with the LG G5, DAC on and off, a Galaxy S7 (Exynos), and my desktop reference setup (Shiit Modi DAC, Onkyo TX-8255 stereo receiver) revealed that the G5 Hi-Fi DAC is probably just a glorified DSP (digital signal processing - applying artificial alterations to the digital signal) box. Here's what that entails. Listening to the same high-quality 256Kbps MP3 track on all four setups, the only one I could really even hear a difference that wasn't attributable to placebo or mismatched volumes was... the B&O DAC. And that is a huge red flag. My desktop reference setup (using Blue's quite-sensitive Lola over-ear headphones) generally allows me to tell one of two things about a phone's audio performance: it's basically fine (differences are not noticeable or so small as to be insignificant at normal volumes) or it's not very good. Anything outside those two results is suspect.

And yet! The Hi-FI DAC G5 was clearly and noticeably shaping and processing audio differently than any other device I tested. I'm not sure what effects are being applied, but I would guess it's some sort of suite of adjustments B&O have made to deem the accessory acceptable to the B&O "signature sound." The problem for me is that, as someone trying to just let the components be transparent and produce flat, unshaped sound, the Hi-Fi DAC is actually doing a worse job at being a piece of audiophile equipment than the G5's standard headphone jack! Sure, you'll hear a difference going from the G5's headphone jack to the Hi-Fi's DAC, but that's literally because LG and / or B&O have gone out of their way to make certain you hear a difference, whether you like it or not. After all, if the average Joe bought a G5 and the Hi-Fi and used the bundled earbuds, do you think LG honestly wants to be in a situation where the customer says they can't hear the difference? They have to be able to hear it, or LG would be openly mocked for selling an overpriced, ineffectual witchcraft box.

So, does the LG Hi-Fi make your audio sound "better"? I mean, if you like the way it sounds from the module better than the headphone jack, subjectively speaking, it could. But it's worth noting that a third-party music app with a few effects and an EQ could probably get you pretty close to doing the same thing, and with the knowledge that you are actually actively shaping the audio in a way that differs from the source. You could also turn it on and off (the Hi-Fi DAC offers no such feature - it is utterly opaque).

LG's Hi-Fi DAC is, sadly, emblematic of some of the current trends in "designer audiophile" products. It's also not totally useless (as a PC USB audio device), but compared to the perfectly good - and much more transparent - built-in audio of the G5, I'll take the latter every day of the week.

Quote, From The Developer Of Fenix, Is A Slick News Reader For Feedly And Inoreader