I love Google Maps. It's one of the most useful applications on my phone, and I would be lost without it. Not metaphorically, but literally – I'm really quite awful with directions. A lot of great features have been added over the years, including some sweet new ones just a few days ago, But there's one feature we all still hunger for, and that feature is posted speed limits. Thanks to a new app called Velociraptor by developer PlusCubed, that's a feature we can now enjoy – albeit with a couple of minor hiccups.

Velociraptor works by overlaying a floating icon over top of the Google Maps app. The icon displays the speed limit for the road you're driving on and, optionally, it can also display your vehicle's current velocity. After the initial setup, it launches automatically when you open Google Maps. It's super nifty, check it out. 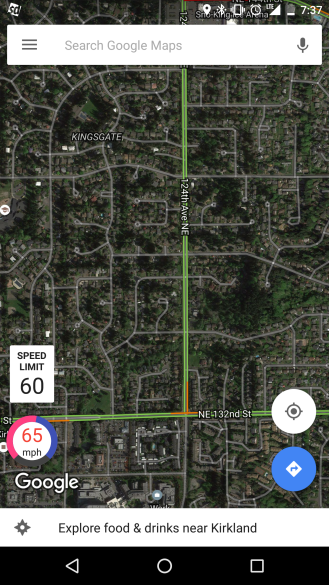 The app setup is quick simple. The first thing you will need to do after you download it is grant a few permissions needed to make the app function. You'll be walked through the steps and it's impossible to get lost within the application because it consists of only one page. This page. 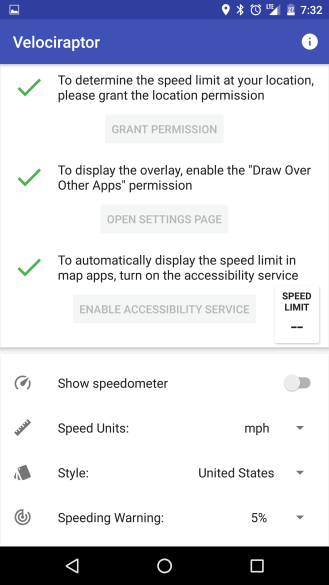 On the app settings page there are a few different options that can be changed to your liking. You can toggle the speedometer on or off, change units and sign style from kph and international to mph and 'Merican', and set speed limit warnings (which changes text from black to red when you are speeding) from 0% to 20% over speed limit. Once you've set up the app the way you like, just open Google Maps to see it in action – Velociraptor will launch automatically and you'll see the speed limit sign overlayed on top of the map.

The little floating sign can be dragged to any position you like in a vertical track a couple of millimeters in along either side of the map (I suspect this is to prevent you from placing it in a spot where it blocks your view of important information). While it can be repositioned, it can't be resized, so don't bother trying to pinch or expand it. The size looks just fine to me though, and the dev did a great job designing the widget so it looks like just another element native to Google Maps.

I know what you are thinking to yourself right about now – how well does it actually work? I've used Velociraptor the last couple of days, which was enough time to make a few observations. As a whole, it works very well, but there are a couple of quirks to be aware of.

The first thing I noticed while testing the app was that speed limits weren't available on some roads. Freeways, highways, and other major roads accurately stated correct speed limits, but on smaller streets the widget would often draw a blank. There also were a few times when the app took several seconds to update the speed limit when changing roads. The app pulls data from HERE maps, not Google, so it makes sense that the information is not entirely in sync with Google Maps. 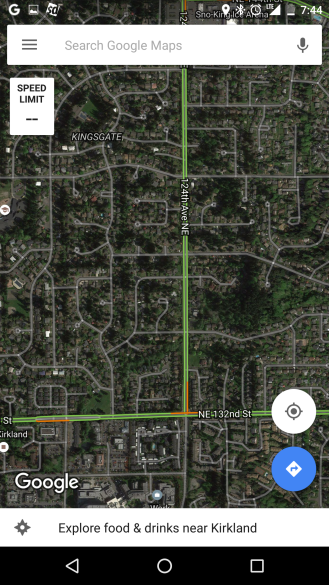 Another odd behavior I observed was that the widget will hang around regardless of which part of the Maps app you are looking at. It's a little odd having a speed limit sign floating around while you are punching in an address, or looking for a good place to grab some food. Fortunately, it's easy to slide it to another part of the page if it's blocking any essential info. 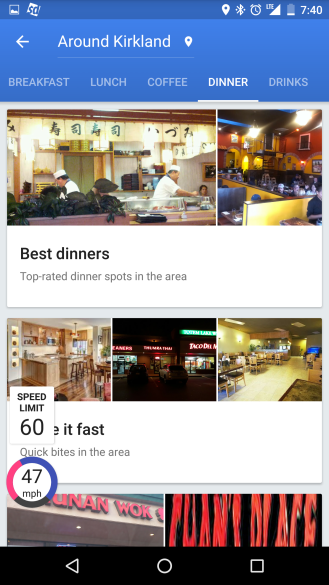 The last peculiarity I detected was that the speedometer was inaccurate and a bit erratic at times, displaying speeds that were several miles-per-hour faster than what my car's speedometer showed. The good news here is that the developer, PlusCubed, released an update for the app just this morning to address that issue. I haven't used the speedometer feature enough today to say whether it is indeed better, so you will have to be the judge of that.

This app is amazing. It's genius in its simplicity and adds a feature I have wanted since the dawn of Google's navigation service. Yeah, there are a couple of kinks that need to be worked out, but none of them are offensive enough to make me want to disable the app. The best part of all this? The app is free, so there is absolutely no reason that you shouldn't download it and try it for yourself.