Who doesn't love a good update? That's a rhetorical question, of course. A few app updates rolled out today, including one for Google+ on Android. A look through it shows that this update was pretty well dedicated to polishing things up on the Notification screen. A previously announced feature is finally locked in, and some of the top requests from users have been addressed. As usual, we've got a link at the bottom if you're eager to get this one downloaded, or just keep reading to find out what's new.

A Server-Side Switch Has Reverted The Changes

So........... It looks like Google has reverted all of the changes listed below using a server-side switch. I've tested it on a couple of phones and confirmed that closing the latest version of the Google+ app and re-launching it will result in returning to the previous version of the Notification screen. We're not sure if this was done intentionally or if it was a mistake, but we'll be on the lookout for more information. 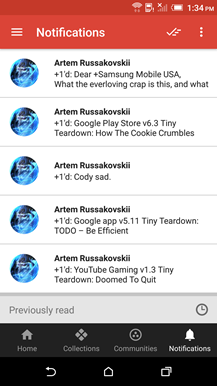 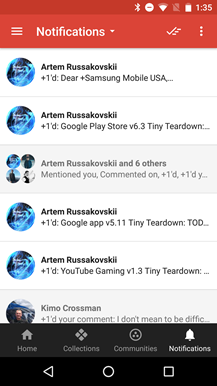 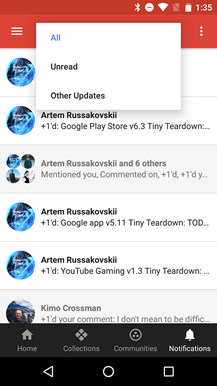 Stop me if you've heard this one. Wait, don't stop me, because you actually have heard this one. About six weeks ago, Google+ v7.3 was supposed to bring notification filters. It seems that never really happened, or if it did, only for a small subset of users. Version 7.6 is actually the version to officially roll out notification filters which allow users to switch between: All, Unread, and Other Updates.

The options are in a dropdown from the title bar. The "Previously read" bar that once sat at the bottom of the notification list has been removed.

Dismiss In Both Directions 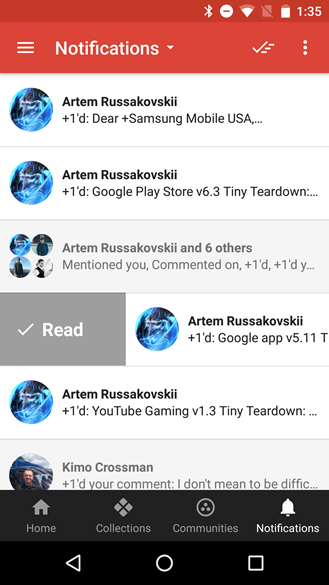 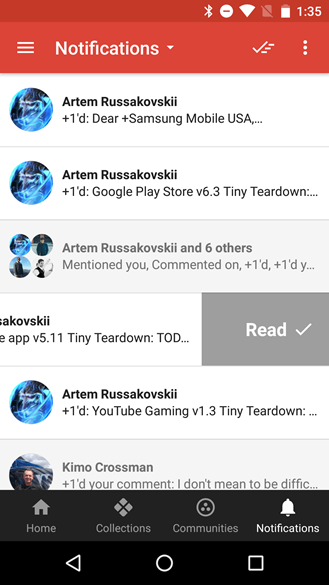 A couple of months ago, Google+ transitioned from its old confusing layout to the (less confusing and) controversial new layout with a bottom tab bar. At the time, the notifications panel existed as a drawer-style element on the right side of the screen, but an update or two later gave notifications a dedicated screen and a button of its own in the tab bar.

At that time, it made sense that notifications could only be dismissed with a right-to-left swipe, because swiping the other direction would close the drawer. The same single-direction swipe behavior remained even after the dedicated screen came along, even though there was no longer a reason for the limitation. Well, the latest update has things working just the way we would expect. As the screenshots above show, a notification can be dismissed with a swipe either to the right or left. 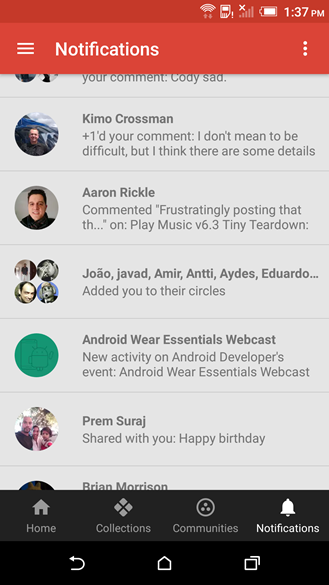 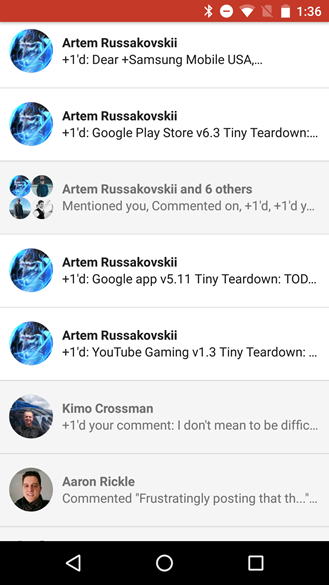 We're not quite done with the improvements to the Notification page, but this one is pretty quick. If you start scrolling down the list of notifications, the title bar at the top and tab bar at the bottom will scroll out of view to give much more space to the content. Scroll back up the list just a little bit and they will reappear immediately.

This brings the Notification tab in line with the behavior of the Home stream, though it's a bit different compared to the pages for Collections and Communities, both of which include their own swipeable views with named headers.

This isn't really much of a teardown so much as a note about a couple of related things that happened at the same time. About a month ago, the Google+ Create Program was announced with the goal of inviting great content creators to collaborate on putting their work on display and bringing more insight into the ways Google+ could grow and improve. It seems quite a few letters have just been sent out to let people know their applications are still under consideration.

Thank you for your interest in Google+ Create. We will review your application soon, and will be in touch if we can invite you to become a member.

If you do not hear back from us, please understand that we have many applicants, and will be slowly expanding Google+ Create over time. We appreciate your enthusiasm and participation on Google+.

Coincidentally, the v7.6 update also includes a couple new lines of text, one of which looks very familiar. The word choices are a close match to what we saw with the announcement and website for Google+ Create.

There's nothing specific to take away from this, but when two related clues show up on the same day, it's usually a hint that something is happening fairly soon. In this case, it's probably going to begin as a promo banner or welcome screen to recommend some great collections. Of course, the program is meant to go beyond just another list of featured collections, which already exists, but we'll have to wait to see how that plays out in the future.

Initial Hands-On With The Huawei P9