Google is sending out all kinds of things today. First it was Nexus factory images, then an Android Auto update some users can actually care about, and now a pretty full bump to the Maps app. There are plenty of live features to look at in this one, but there is some teardown material, as well. There's no point in wasting words, let's get straight into it. 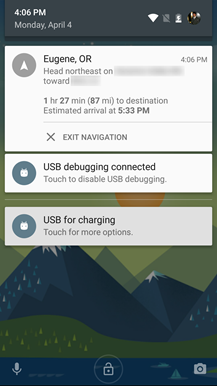 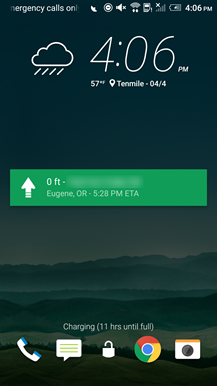 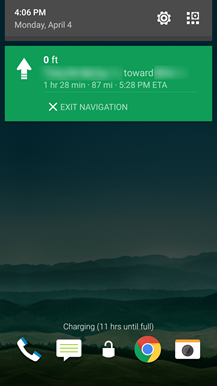 Fire up Navigation mode and hit the road to find the first notable change. The persistent notification that comes with navigation no longer masquerades as one of the many flat white notifications on your phone, it now sports an immediately distinctive style with white text on a green background.

We all know we're not supposed to be messing with our phones while driving, but many people do it anyway. This change at least gives users the easiest and most "glanceable" way possible to get back into the one mode that they actually should be in while driving. It's better than trying to read through the top three or four notifications if they all look fairly similar. 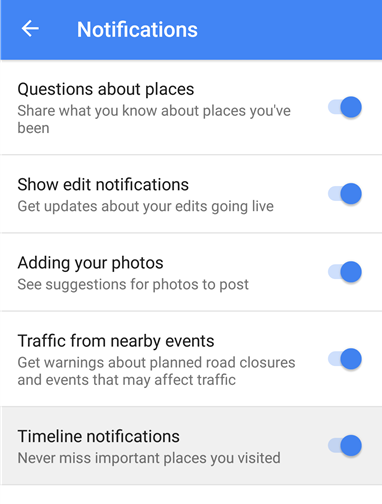 Another notification-related feature is in this version, but this one looks to your past rather than your present. If you peek in on your timeline very often, you'll probably notice there can be a lot of mistakes in there. Maps does its best to make educated guesses about the locations we visit, but it can't get everything right. For the last few months, Maps has included prompts in the Timeline view to allow for making quick fixes, but you won't see those if you don't look there often. Now, Maps wants to be a little more upfront and ask you through notifications.

These notifications will show up sometime after you've stopped into a location. For those of us that like to keep a clean history, mostly because it gives us cleaner predictions in the future, this is actually something we probably want. For everybody else, just drop into Settings –> Notifications and turn off the toggle. 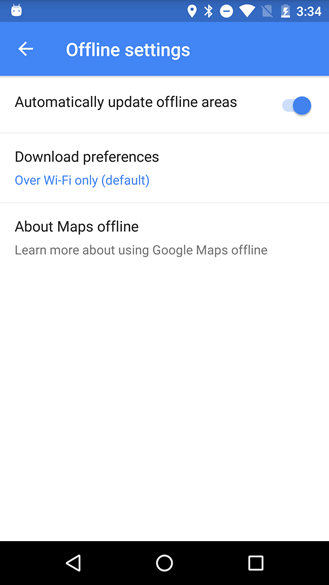 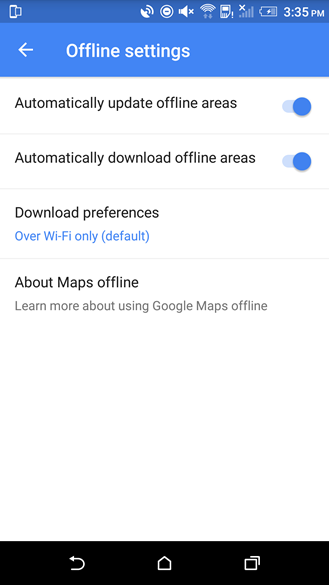 A new option to "Automatically download offline areas" was added to the Offline Settings screen. At first the option seems pretty vague without more context, but a look through some of the strings for Google Maps tells us just about everything we might want to know. Google Maps is going to act smarter by identifying the areas you are in and preemptively download those maps so you won't have to worry about losing navigation with poor connectivity or network congestion.

Management of downloaded areas is still done the same way as always, so clearing off maps you don't need should be a breeze. I haven't been able to force this to work yet, but it looks like there should still be a notification generated for downloads and most of the same rules will apply, particularly as they relate to Wi-Fi usage.

Judging by the strings, it seems Map will still use a live connection even when an offline map is available, but at least it will use offline maps to supplement its information when your data stream can't keep up. 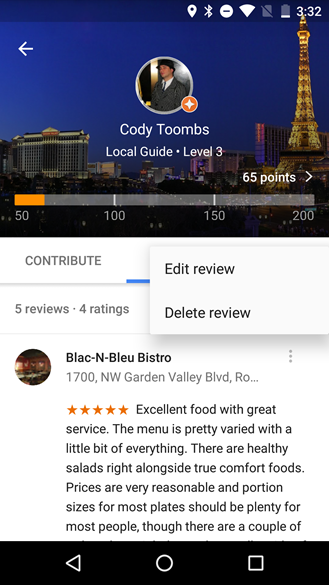 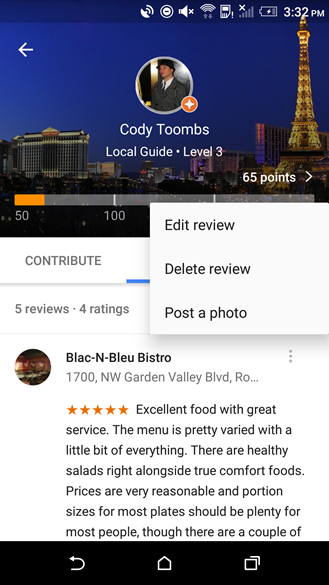 This one doesn't need much of an explanation. Go to your list of Reviews (under My Contributions) and tap the overflow menu. In addition to the Edit and Delete options that were already there, a third menu item has been added that allows you to upload a photo for that business. The Contribute section already had this same menu item, so it's not really a new thing so much as taking care of a missing feature. Still, it's faster than searching for a business to submit a picture or using some other methods.

After a couple of tips and a little bit of conversation, we stumbled onto at least three variations on the layout for quick searches within Maps. It seems the overabundance of A/B testing is alive and well even outside of YouTube. The comparison originally occurred after we were tipped with a couple of screenshots (Thanks, Moshe!), and then Artem and I compared our own. Here's what each of us is seeing: 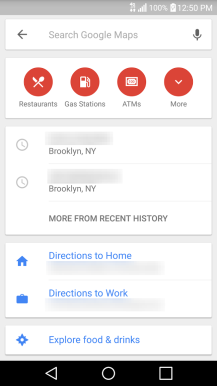 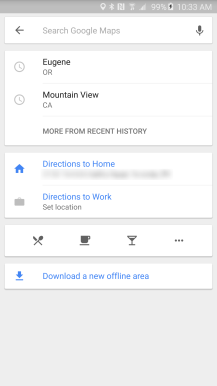 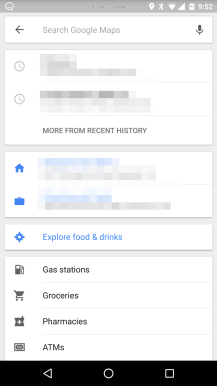 The difference is most striking in Moshe's screenshot, which includes big red, highly visible circles for quick searches. My own view includes just simple icons without words, which isn't as helpful, but it consumes very little vertical space. Artem's screen shows a stack of icons with words. The both of the first two shots, tapping the overflow/more button expands to a larger list of options.

There's not really a new feature here, but it's interesting to see that some teams are going pretty far to test different designs to figure out which ones are working best for users.

I want to add a quick note that almost all of these items from the teardown could very well be live already, so keep an eye out for all of them. Most of the features below should only appear under special circumstances, so I'm counting them as things for a teardown because I can't replicate them yet, but they could appear when the right conditions are met.

I know, most people reading even the title are about to jump to the comments to point out this already exists in the navigation drawer. Yes, there's a "layer" for Traffic and it includes some really great, very precise information about slow traffic conditions, accidents, and just about everything else. Well, it looks like Google might be playing around with something even more up-to-the-moment.

Google's engineers have talked many times about using a combination of historical data and live information collected from drivers using Maps Navigation (and Waze). This makes it possible to predict traffic conditions in the future and to identify abnormal conditions and report those very quickly. However, there may be times–and places–that have very rapidly changing traffic conditions, and the current system might not have that level of resolution. At least, that's my guess...

It seems there is an experiment dedicated to using just live data exclusively. It's possible this is just for internal testing, particularly for the purposes of testing how useful the data can be. I don't know that I would bet on ever seeing this for regular users, but it's interesting to see that some kind of test is going on to bring even more timely traffic information to users.

If you take part in the Local Guides program–submitting pictures and reviews, answering questions, or reporting new information–then you're probably going to like some of the new tools to make contributions even more accurate.

Notification for places that need a picture

Google almost certainly has the most comprehensive database of user-contributed photos for different places around the world, but there are still a lot of businesses and landmarks that deserve something more than a mediocre shot from the roaming Street View cameras. Pretty soon, Google will offer to clue you in when you're in the vicinity of a place that has been thus far neglected by the masses.

We all know the people Google has reviewing contributions can get overwhelmed and some weird things have snuck into the database. The curation team is mostly responsible for keeping objectionable material out of view, but they can't know everything or go everywhere to confirm people are giving true and accurate information. As people give more and more information about locations, Google is getting ready to ask others to help verify the accuracy of it.

The strings indicate that this feature is currently focused on covering corrections suggested by one user, and other users will be asked to vote on it to either agree that the changes are accurate or not. Since it's a vote, it would obviously take a few responses before a correction can be accepted, though these votes might also involve a timed cut-off such that votes are collected for something like a week before a correction is automatically accepted or declined.

Welcome To The Border

This one is maybe a little more like a cute easter egg, but a simple string was added that will show a simple message when users cross a border. I'm not sure if this will only happen between countries or possibly down to smaller territories like between states in the US, but it's a novel idea that adds just a little bit of friendliness to the app. 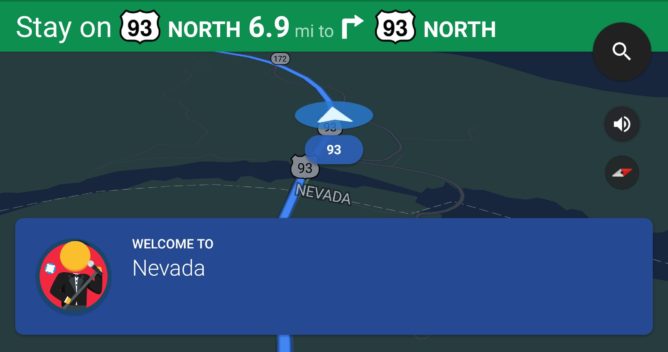 Update: Welcome messages are now showing up when you cross over borders. Many thanks to everybody that has sent us tips and screenshots!