Look what we have here: another WhatsApp beta update that adds lots of new things. Who knew? Alright, I guess we all knew that the team was on a roll of new features lately, but this one is more interesting than many of the previous beta updates. In version 2.12.560 of the app, we get a new Reply button in the notification, multiple selection and actions on contacts and groups, and there's a little easter egg from a previous version that we hadn't talked about before. Without further ado, here are all the goodies.

Quick Reply from the notification

WhatsApp's notification has been receiving a few tiny changes in the last updates, but none as important as this ability to quickly reply to a message without opening up the app and the entire conversation. The expanded notification now shows a Reply button that opens up WhatsApp's own overlay. To be clear, this has nothing to do with Android N's Quick Reply functionality — I don't have an N device with WhatsApp installed, so I can't test this claim but I'm pretty sure that the app already supports N's native Quick Reply feature because it has implemented the API for Android Wear. Maybe, and this is just conjecture on my part, this new Reply button is meant to be specific to pre-N devices so that they can have feature parity with devices on N later on. 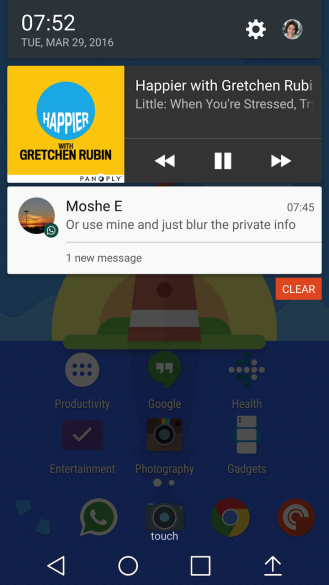 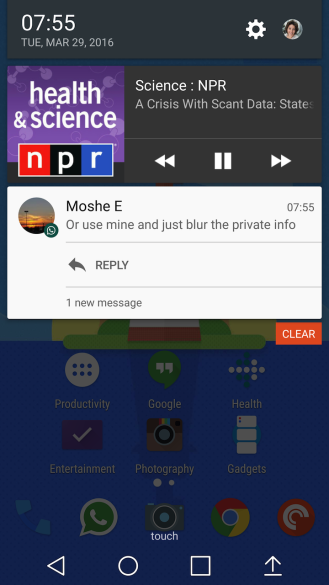 Expanded notification on previous versions (left) and now on 2.12.560 (right)

The window that pops up shows the message's sender, text, and includes a couple of options to answer. There's a text box, a weird vertically aligned emoji panel, a voice message option, and buttons to close it (which dismisses the notification without sending an answer) and view it (which opens the full conversation in WhatsApp). 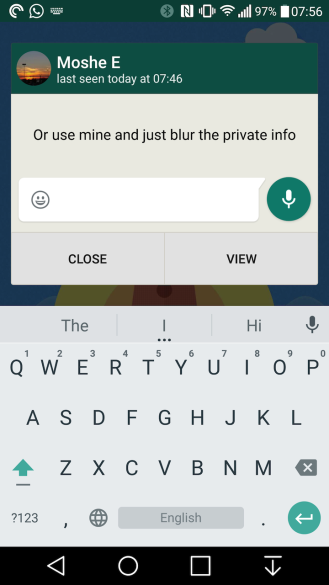 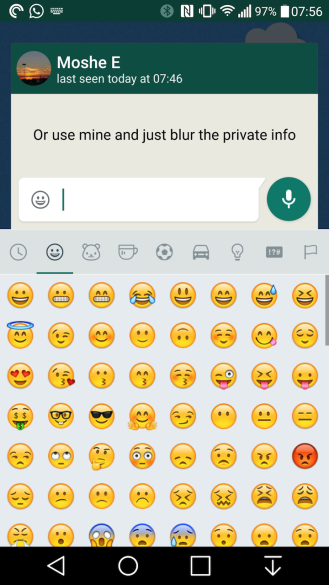 Previously, when you tapped the profile or group image of any conversation (single contact or group), you got an overlay window with an expanded image and options to view info or open the chat. In order to perform actions on a contact or group chat, you had to long-tap on the name/last message part of the screen to get a list of actions. 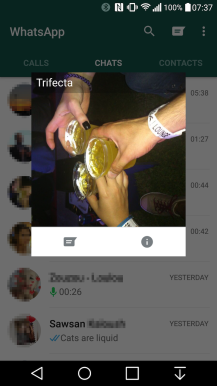 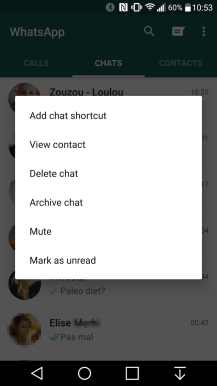 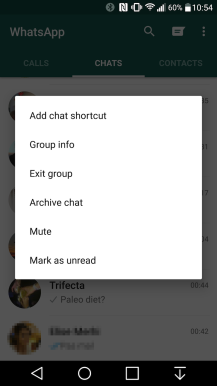 Now, the large image overlay is gone and instead you'll see a faster way to perform the actions of the long-tap menu in the app's title bar. You only have to tap a profile/group image to trigger this and the provided actions are contextual and smart enough to adapt to each scenario.

For a single contact, you get: Archive, Delete, Mute/Unmute, Add chat shortcut, View contact, and Mark as read/unread. 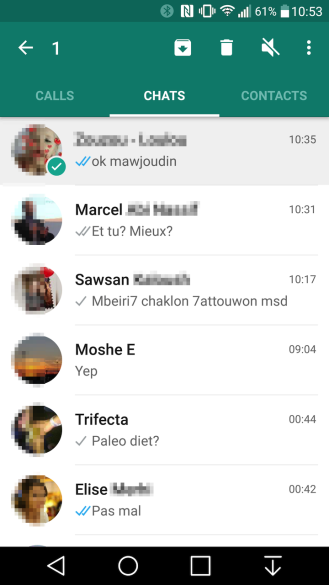 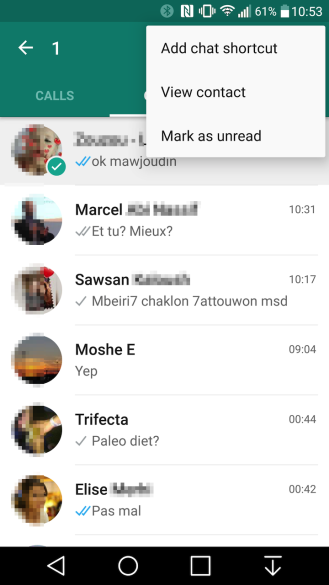 For a single group, you get: Archive, Leave group, Mute/unmute, Add chat shortcut, Group info, and Mark as read/unread. 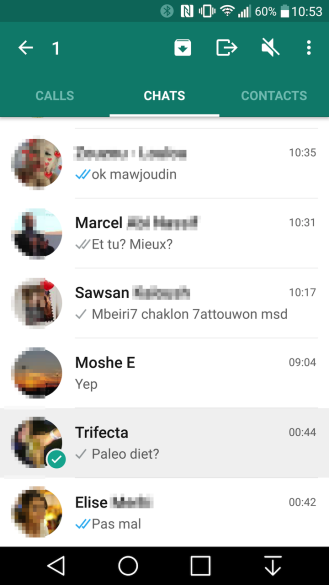 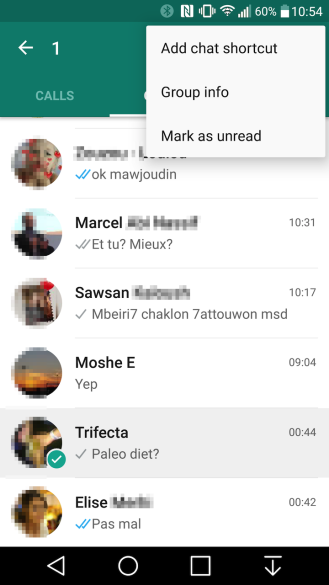 The best part though is that you can multiple select chats, regardless of their muted, read, or contact/group state. The feature is so well implemented that it'll adapt and only show the common denominator actions between all possible ones on the different conversations selected. 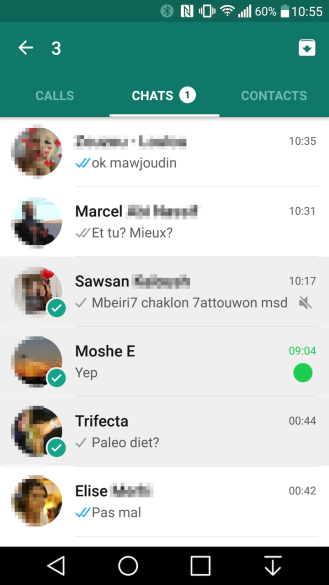 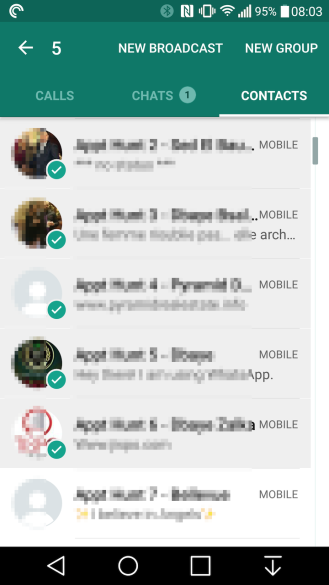 Multiple selection works in both the Chats and Contacts tabs, but not the Calls one. In Contacts, you get the option to start a new group or a broadcast when selecting several new persons.

This last bit isn't new in version 2.12.560, but it appeared in 2.12.542 and got a slight improvement in 2.12.551. It's a new wallpaper selector layout that uses modern Material icons (except WhatsApp's own icon, which still looks positively outdated!) and finally dumps the last Gingerbread remnant from the app.

Instead of the ugly grey Default wallpaper icon circa 2011, there's a new circle icon with a color reminiscent of WhatsApp's own shade of teal green. Documents has also changed to a more obvious Gallery, so anyone can easily guess that it lets them select images from their own phone as a wallpaper. 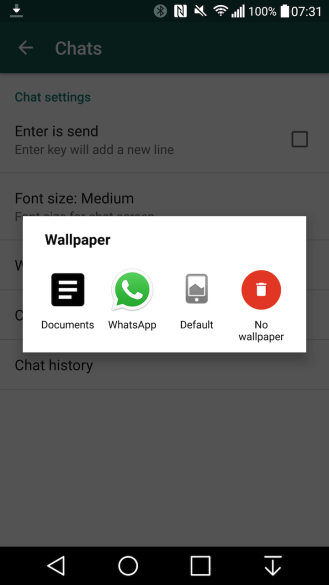 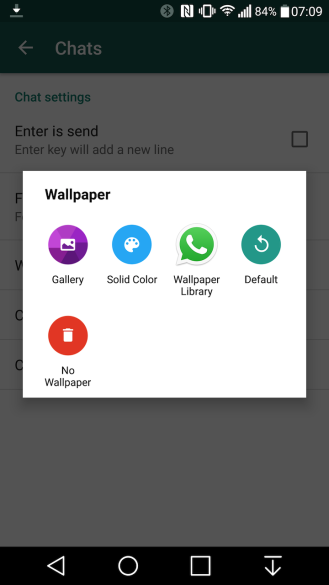 Wallpaper selector before with that ugly Gingerbread default icon (left), and after (right)

A fifth option has also been added: solid color. This opens up a list of different solid colors that you can preview and apply for a bit of an added personal touch to your conversations. 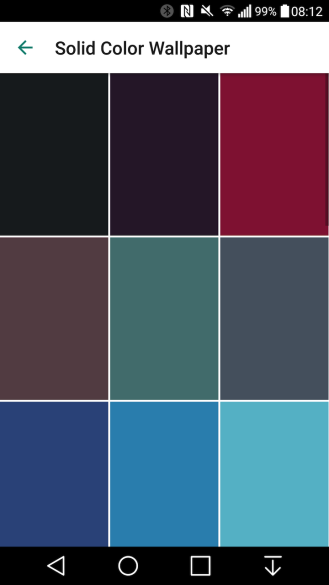 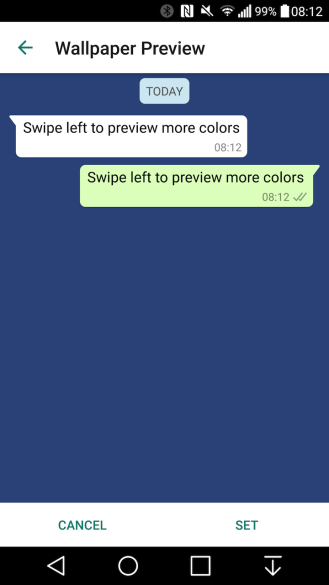 Remember how a couple of versions back WhatsApp added text formatting for bold and italics by wrapping words between *asterisks* and _underscores_ respectively? At the time, we looked for the strikethrough trigger but couldn't find it. It seems that at some point in the last versions, the ~tilde~ got the superpower of striking through text. It's not visible on 2.12.556 but it is on 2.12.560. Try it out. Thanks: Mahmoud Itani. 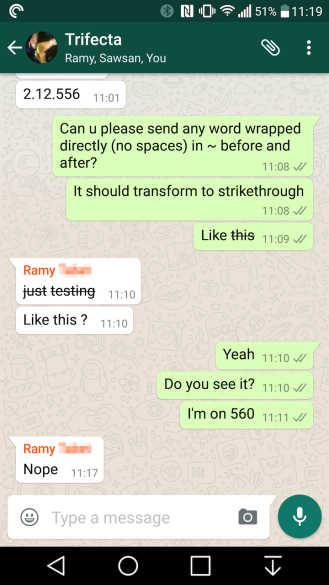 In order to see all of these new options you'll need to be on the latest WhatsApp beta version 2.12.560. That's done either by joining the official Play Store beta program and waiting for the app to update or by manually grabbing the file from APK Mirror.

Spotify Launches In Indonesia With Free And Paid Rp49,990 Tiers