Google just posted the official changelog, but it's more of a roundup describing features from the last few weeks. For example, it mentions suggested albums with maps, location pins, and such; all of which were added with v1.16 and switched on a few days later by Google. Nevertheless, here is Google's official changelog for v1.17: 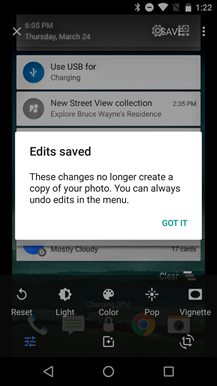 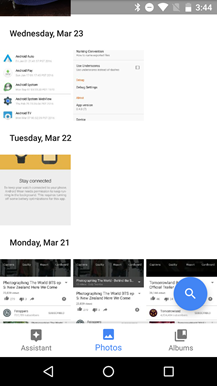 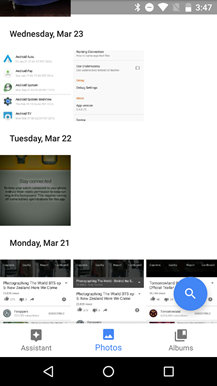 Left: dialog. Center + Right: before and after an edit.

If you haven't been a fan of the way Photos handles edits, this update might be for you. Google has updated the behavior for making alterations to pictures. In previous versions of the app, loading an image and making some changes in Edit mode would automatically generate an extra copy of the picture, leaving you with one original version and your modified copy.

With Photos v1.17, a non-destructive editing model has been adopted. Duplicates are no longer created and the edits that are made allow for users to instantly revert a photo back to its original state. The first time an edit is saved, a dialog appears with an explanation of the changes and mentions the ability to undo changes from within Photos.

The advantage here is that Photos will no longer muddy up your collection with a bunch of extra copies each time an edit is made. On the other hand, while duplicates were often not the desired behavior for many users, some people have come to expect them and may want multiple copies. At the moment, there's no way to make duplicates from within the app.

The Photos team also detailed the new feature on Google+.

It looks like Photos is going to get a second launcher icon and a separate landing screen. There's a new Activity listed in the manifest with the name GalleryActivity, but it doesn't replace the current HomeActivity that Photos currently uses. The launcher icon will carry the name "Gallery" and a look that is undeniably generic.

It's certainly possible this is an experiment with a new interface, but it's more likely a way for Google to ensure inexperienced users don't get lost looking for a photo viewer on a brand new phone or tablet.

The Photos app tries to be nothing if not helpful. Every couple of versions, there's some new tool or feature that can simplify or automate a process for you. The latest one will try to detect images that are oriented incorrectly and offer to fix them with the tap of a button.

The text shows that this will be a batch process, so it should be fairly quick and simple to fly through a few recommendations and save the changes at the end.

It's possible this one is already live, but I haven't seen it pop up on anything in my collection yet.

If you're packing a phone made by Motorola, you might be in for a little treat. Google is going to ply Motorola owners with free "Original Quality" storage for two years. It's not clear if this promotion is limited to recently purchased gadgets or certain models, but it certainly looks like it may be open to anything carrying the big 'M' on its backside.

<string name="photos_onboarding_storage_promotion_settings_text">Original quality uploads from your Motorola device get free storage for up to 2 years</string>
<string name="photos_onboarding_storage_promotion_text">Motorola devices: change settings to get up to 2 years free storage for original quality uploads</string>

If the phrase Original Quality doesn't mean much to you in this context, it comes from the way Google Photos currently backs up images to the cloud. The app offers two options to users: store high quality photos for free or use Drive storage to hold onto the original images. In this case, choosing to store images at high quality means they will be compressed down to a still very high 16 MP (videos scale to 1080p). While that's plenty for most people, there are some like photographers that would rather keep every image in its original resolution. Well, if you're a Motorola user, it looks like it won't cost you anything to do that for the next two years.

The 25% Developer Discount On The Pixel C Is Now Active In Austria, Belgium, Canada, France, ...